Now that a bipartisan group of U.S. Senators released a set of principles related to comprehensive immigration reform, pro-reform groups are reacting to the news. Here are just a few of the public reactions and statements we have received today:

Greisa Martínez, a DREAMer from Dallas, TX and member of United We Dream’s National Coordinating Committee said the following:

The debate on immigration has kicked into high gear and DREAMers will be at the frontlines of the fight to ensure that immigration reform legislation protects our families and our values. At this early stage, we are glad to see that Senators from both parties are working together and have created a bipartisan starting point that includes citizenship for DREAMers and our families.

For DREAMers, this is a fight of self-determination. Today, we celebrate the incredible momentum for reform we are seeing from leaders in Washington. DREAMers and our community have made our power known to politicians of both parties and we won’t let up.

The time for action on immigration reform has come. Political leaders must end out-of-control detentions and deportations that have caused too much pain for our families and communities already. Neither party can afford to delay or shirk their responsibility to the American people to fix our broken immigration system and create a path to citizenship for 11 million Americans without papers. The details matter and DREAMers will be watching closely and holding Democrats and Republicans accountable.

DREAMers will fight for every DREAMer, parent, and member of our community, demanding that we all have a direct and clear path to citizenship, not one that hinges on lengthy waits in a generation-long line or on further militarizing our border or imposing excessive, costly enforcement measures. We’ll fight for access to health care, higher education, and fair and safe working conditions. We will stand up for every family, including LGBT families, who deserve the same protections as every other family.

I am proud to stand alongside a broad and diverse movement of immigrant youth who will continue their role of leadership within the immigrant rights movement to build national momentum for policies and laws that protect all families and provide a roadmap to citizenship.

The National Day Laborer Organizing Network (NDLON) posted the following image on its Facebook site and also responded to the news on its website with a statement from Pablo Alvarado, NDLON’s Director: 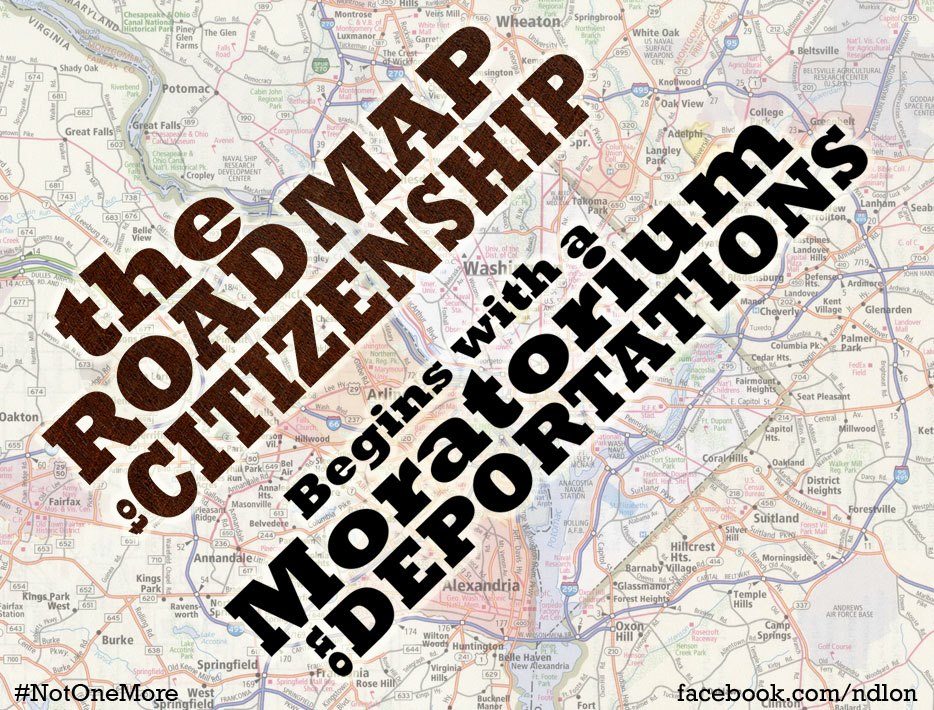 The Senate debate about 11 million people’s path to citizenship —fundamentally a debate about our pursuit of political equality in the United States— should no longer be held hostage by irrational fears.

While it is good Congress is getting to work, the Senators need to update their starting point. The Senate’s 2007 framework excluded millions of immigrants from the path to citizenship and led to an avalanche of anti-immigrant enforcement in recent years. The debate must be different this time around.

To be productive, the threat of deportation needs to be taken off the table immediately, by Congress or by the President. Immigrants themselves need to be part of the reform conversation and a full suspension of deportations will give families breathing room to do so. Until deportations stop, President Obama is in the impossible position of deporting the very people he is ostensibly trying to bring into citizenship.”

We are very pleased that a bipartisan group of Senators has announced principles for immigration reform that create a roadmap to citizenship for 11 million undocumented immigrants. This emerging consensus on the primacy of citizenship demonstrates that elections matter, momentum matters, and details matter. On all counts, today’s announcement means it’s “game on” for real immigration reform in 2013.

The political imperatives for both parties to deliver on immigration has opened up the space for bipartisan agreement and for the larger push for reform this year. This is a workable framework that has been signed off on by some of the most influential Republicans in the country. This consensus matters hugely and demonstrates that momentum is on the side of real reform.

The roadmap to citizenship should have reasonable criteria and a reasonable timeframe. The process should be simple and straightforward. It appears that the group is avoiding gimmicks from the past – like the notorious ‘touch-back’ idea – which is important. The specific legislative details that will emanate from these principles will be critical to monitor.

Bottom line, today’s announcement is a welcome course correction from the partisan stalemate of recent years on immigration, while offering another reminder why reform is on its way in 2013.

We cannot let this momentum die. It’s not going to be easy, and it would be naïve for either side to think that they are going to walk away 100% satisfied. But this is a real opportunity for Congress and the Obama administration to show the American people that they can work together and deliver the solutions that this country needs to get back on track.

The saying may be cliché, but it’s wholly appropriate in this case—united we stand, divided we fall. There will be tough legislative battles ahead on everything from the federal budget to gun violence, and they will test whether our elected officials truly plan to put partisan politics aside and do what’s best for the economy and the American people.