NISGUA (Network in Solidarity with the People of Guatemala) filed the following Days 13-14 report of the genocide trial of former dictator Efraín Ríos Montt and ex-intelligence chief Mauricio Rodriguez Sánchez in Guatemala City. They have given us permission to republish all their reports about this historic trial.

On days 13 and 14, the court heard four controversial testimonies from experts called by the defense team. These experts were originally been denied approval to testify in the trial because the defense team submitted their names after the established deadline. However, the defense team appealed this ruling made by Judge Gálvez on February 4th and an appeals court approved the experts. On the second day of the trial, Judge Barrios recognized the appeals court’s decision and swore in Manuel Eduardo Conde Orellana, José Luis Quilo Ayuso, Benjamin Rafael Francisco Godoy, and Carlos Leonel Mendez Tejada. 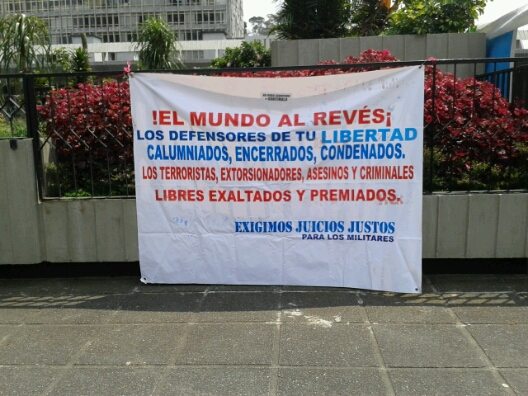 Pro-military sign outside the courtroom. “The world is upside-down! …We demand fair trials for military officials.”

Starting in the early morning, the courtroom setting felt distinctly tense on day 14. Public attendance was higher than recent days and featured a number of high profile faces making for a dynamic crowd. Foreign diplomats were in attendance, including Alberto Brunori, representative of the UN’s High Commissioner for Human Rights in Guatemala, and the first sighting of US Ambassador Arnold Chacon. In the afternoon, the US embassy released a statement confirming its support for justice and reconciliation in Guatemala, “as reflected in the Peace Accords.”

Moreover, Manuel Eduardo Conde Orellana was called to testify on day 14 only shortly after Fredy Peccerelli’s highly technical testimony on forensic evidence that validates the massive and violent character of military operations in the Ixil region. Conde Orellana testified on his work with the reconciliation commission on Guatemala’s peace negotiations leading up to the signing of Guatemala’s Peace Accords in 1996. He cited the importance of reconciliation in the peace process and the challenges caused by high levels of mistrust at the negotiation table between the Guatemala National Revolutionary Unity (URNG) representatives and military representatives.

As one of his qualifications to work in peace negotiation, Conde Orellana took the opportunity to cite that his own father, Oscar Conde, was killed by rebel forces, which he called “an untried and unrecognized murder.” When asked what methodology he used in his report, Conde Orellana replied, “I used the method of narration, transcription and my personal experiences.” He repeated throughout his testimony the idea that the violence was global and not at all particular, “No one can say that the violence didn’t affect him or her. No one can say they didn’t know anyone who shed blood in internal armed conflict.”

Defense expert José Luis Quilo Ayuso followed Conde Orellana to testify on military terminology and chain of command. Quilo Ayuso is well known as a former military official. In fact, he is the current president of Guatrmala’s Association of Military Veterans (AVEMILGUA), which often hosts public actions in defense of military officials accused of crimes of the past.

The Public Prosecuter (MP) probed: Outside of the courtroom you’ve participated in public demonstrations of your support for the accused, correct?
Quilo Ayuso: Yes, as part of my association.
MP: As part of AVEMILGUA, are you in favor of the association’s paid ad campaigns?
Quilo Ayuso: Yes, of course
MP: You’ve taken part in radio programs and said in public that there wasn’t genocide?
Quilo Ayuso: Following my criteria, there was never intention to commit genocide.

Quilo Ayuso ended his testimony by confirmed that a national military intelligence network existed and continues to exist in Guatemala. He affirmed that General Rodríguez Sánchez was director of the network from 1982 to 1983.

The final defense expert Benjamin Rafael Francisco Godoy testified on the internal armed conflict and the insurgency in the Ixil region. Godoy’s experience in the Guatemalan military spans the military hierarchy, including serving as Kaibil, specialists in counter-insurgency operations. Godoy was asked if he belongs to any military or ex-military associations and he confirmed that he also is a member of AVEMILGUA. He repeated a familiar military narrative in his testimony. He explained, “the entire national territory, 22 departments of Guatemala were affected by the 4 different guerrilla fronts.” However, when asked who was the country’s “internal enemy,” he claimed he was unfamiliar with the term. Godoy’s report, similar to earlier defense expert’s contributions, lacked facts to prove his conclusions and presented a number of contradictions.

Public Prosecutor (MP): If your report is based in history, why didn’t you include information on clandestine mass graves that have been discovered on military bases throughout the country?
Godoy: At the time I conducted my study, I didn’t have that information.
MP: So your expert report is in fact based in history and not military narrative?
Godoy: Yes.

Judge Barrios ended day 14 noting that defense expert Godoy had not signed off on his report, thus not fulfilling proper legal procedure.

2 responses to “Genocide on Trial, Days 13 & 14: Defense Experts Testify, “There Was Never Intention to Commit Genocide””