The Philly Bag Job Continues: Cop who Punched Woman on Viral Video Gets Job Back

Seriously? Do you remember the viral YouTube video from last fall showing a Philly police officer punching a woman after the end of Philadelphia’s Puerto Rican Day parade? Do you remember how the officer, Lieutenant Jonathan Josey, was relieved of his duties just a few days after the video was shared all over the world? How about the judge’s decision that cleared Josey of any wrongdoing, the same judge who is married to a cop but never revealed that until after the fact? 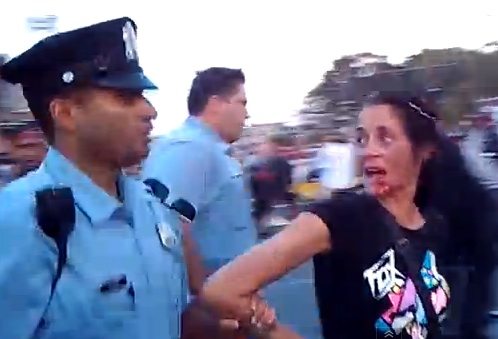 Now, it looks like Josey got his job back this week. As this local Philly report states:

Philly.com added the following about Josey’s case, which involved his striking Aida Guzmán:

Josey challenged his firing, and the matter went to arbitration. Earlier this summer, an arbitrator ruled in his favor, a police spokesman said.

John McNesby, president of Fraternal Order of Police Lodge 5, was unavailable for comment, a spokesman said.

Guzman received a $75,000 settlement from the city after filing a federal lawsuit over the incident.

Her lawyer, Enrique Latoison, said Monday that he was “expecting this, but still shocked” by Josey’s reinstatement.

“Once he was acquitted, how could they keep him out?” Latoison asked.

He said Josey was fired before the internal investigation was completed, resulting in a violation of the police union contract.

Latoison said Guzman was upset about the reinstatement. “She feels revictimized and she’s also scared for other people who can be treated this way,” he said.