This weekend, we chatted via email with Xavier Luis Burgos, editor of La Respuesta (“The Answer”), a new online magazine dedicated to the Puerto Rican Diaspora. Yeah, we are supporting this magazine because we believe it is important to support these types of initiatives. Read on. 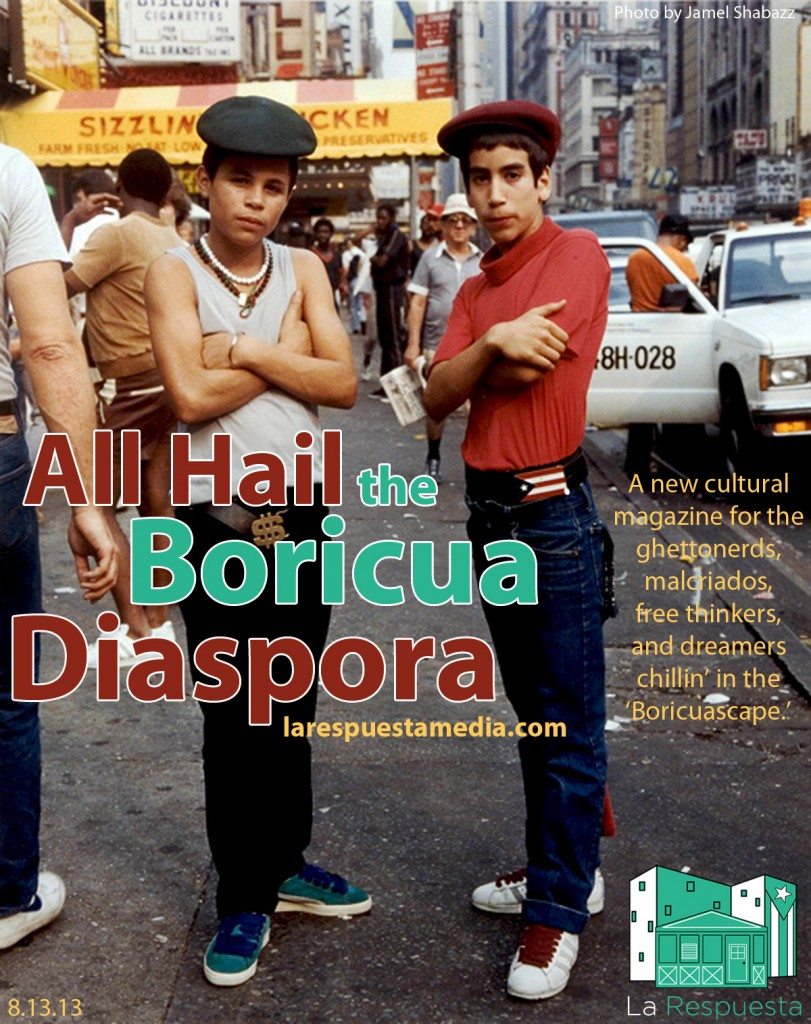 What is La Respuesta? Why now?

XLB: La Respuesta is an online cultural magazine working to build connections among and curate a conversation between Puerto Ricans living in the United States on the issues that affect us and are important to us. This is not to say that what happens in Puerto Rico isn’t important to us, but it isn’t our primary focus. We don’t exclude that knowledge and experiences – on the contrary – we welcome voices from the island. But, we are concerned with cultivating and remaining what it means to be a Boricua in the U.S., especially one who is born and/or raised here, speaking and thinking mostly in English, and negotiating multiple identities and experiences here. We are constructing a space for that internal conversation and to provoke thought on this important (for U.S. and Puerto Rico society) and growing demographic. There are nearly five million of us here and most of us will probably never return to live on the island, but we are not fully assimilating to dominant U.S. culture either. So how do we explain that, engage with that, and build a collective consciousness from there? La Respuesta is one attempt to address this reality.

How do you curate stories for publication?

XLB:This is our second edition so our process is fairly new and experimental. We do know that we want to engage as many folks and experiences as possible, from youth to scholars, activists and artists. We want to incorporate as many voices and identities as possible, from queer and trans folk to santeras/os, our elders, Black and multi-ethnic Boricuas, to name a few. We are attempting to do this while being progressive and critical in thought and product.

Tell us more about your process?

XLB: The process, therefore, is to be both open and intentional in our submissions. We are an eclectic motley crew mostly based in Chicago with great folks across the country, primarily on the East Coast. Therefore, we have lots of diverse contacts. We hit them up for submissions and other contributions that fit our mission and vision. We also give an open call for submissions so that anyone can contribute. The Editorial Core meets and collectively decides which pieces are a good fit for La Respuesta. In this way we get a myriad of submissions and ideas but with a critical perspective on multiple provocative issues.

How can people get the magazine?

XLB: We so wish we could print hard copies as well, but the beauty of the internet is that it’s (practically) free and fairly accessible. So we are an online-based publication, so one could find it at www.larespuestamedia.com and our social media pages. We do want to print special print editions in the future, but their distribution will most likely be via the internet.

What is your vision and where do you see La Respuesta in the context of the Puerto Rican community, both on the island and on the mainland?

XLB: Our vision is this: “La Respuesta strives to produce a mosaic of the cultural, artistic, intellectual, spiritual, and political realities within the diverse Puerto Rican Diaspora. It moves towards building inclusive identities and perspectives that recognize the Diaspora as central to understanding the Puerto Rican people. The magazine aspires to be a significant resource for Puerto Ricans in the United States, offering a multitude of creative and provocative media.”

Personally, my intent is also to provoke, agitate, and engage Boricuas in the Diaspora to think about their communities as constituting a distinct experience that expands the concept of being Puerto Rican. And in many ways, we do. But the trend is to usually understand Puerto Rico as the essentialist, “authentic” center of puertorriqueñidad. In my mind, a Boricua from Queens, NY (like myself), Chicago, Philly, Cleveland, Lorain, Orlando, etc is just as Boricua as any from Borinquen. Of course, not in the same way, but we must celebrate and validate those differences and follow (and influence) where those differences are taking us. We also hope to be a space where the multiple, sometimes parallel and divergent discourses Puerto Ricans are engaged in are discussed. In other words, if you want to know what Puerto Ricans in the U.S. are thinking and doing, La Respuesta is an important place to look.

Is it a political magazine? Do you take a stance on the island’s status dilemma?

XLB: It’s political to the extent that all things are political and cultural. Puerto Rican culture and identity are political in that despite colonialism, racism, gentrification, mass sterilization, etc (both on the island and the Diaspora) we still wave our flags proud on the streets (and build monuments to them like on Paseo Boricua, Chicago). And we still call ourselves Boricua. ‘Culture’ is essentially ways of knowing and doing and our culture is political because it exists in resistance to many of those things that seek our destruction. We live a culture of resistance and that, in itself, is political. So, of course, many issues that are seen as divisive and political come out in our submissions. And since we are inherently critical to what many folks may take at face value, consequently, many people involved in La Respuesta are pro-independence. But that doesn’t mean we don’t have differences on what ‘liberation’ and ‘independence’ means, whether its regarding the island’s political status or our Diaspora communities, or how to engage it. Some folks might be turned off by this reality, but one would be hard pressed to find a Boricua cultural magazine anywhere that doesn’t have a progressive, left-wing, and/or pro-independence slant.

How has the response been so far and what are your future plans?

XLB: The response has been amazing. Latino Rebels has been a huge support from the very beginning and so have other Latina/o publications. We are finding what we always knew – there are so many incredible Boricuas in great places, whether in media, the entertainment industry, or academia. And they have expressed that La Respuesta is a place to connect them and share their work. We hope to continue to be this loci of a Boricua Diaspora internal conversation shared with the world. In the future we plan to develop a more solid base (in terms of writers and readers) in places where Puerto Ricans are highly concentrated in and to organize networking event and forums to discuss the issues affecting us.

One response to “La Respuesta: A New Online Magazine for the Puerto Rican Diaspora”