Say hello to David Bradley, one of the 10 Republicans who are part of the Texas State Board of Education (SBoE). In response to an Associated Press reporter’s question about a vote to have Mexican American Studies (MAS) be part of the state’s formal curriculum, this is what Bradley said:

We wonder what Bradley would want to boycott exactly? Making stupid comments that mock the struggles of farmworkers and what they had to endure for better conditions and an actual voice?

We’re all Americans. To suggest otherwise is to further segregate and divide the community. I’m sorry if I disappoint some folks, but it’s almost reverse racism.

Ahh, yes, the “reverse racism” argument. Here’s our response to that one:

And he said this to another reporter:

Nonetheless, Bradley’s comment confirm why some Texas Republicans remain clueless about “Texas history.” As one someone told us on Twitter:

@thepoetmendez @latinorebels @teainfo The same TX history that persistently paints Mexico as a backwards enemy of US interests.

The vote for MAS is happening tomorrow, and with 10 Republicans on the board, it will be interesting to see if it passes. (The board has five Democrats.) Nonetheless, that is not stopping our own Librotraficante and others in Texas who have been running phone banks and spreading the word about what having MAS matters. 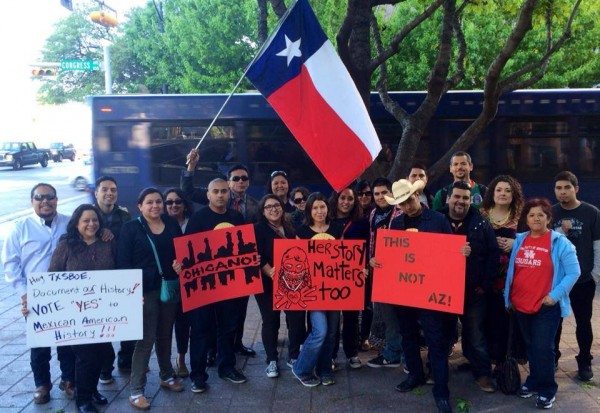 For the latest updates, follow @librotraficante, @HighTechAztec and @thepoetmendez on Twitter. ¡Sí, se puede! No matter what Bradley thinks.