Here is the latest update we have received from NotOneMoreDeportation.com: 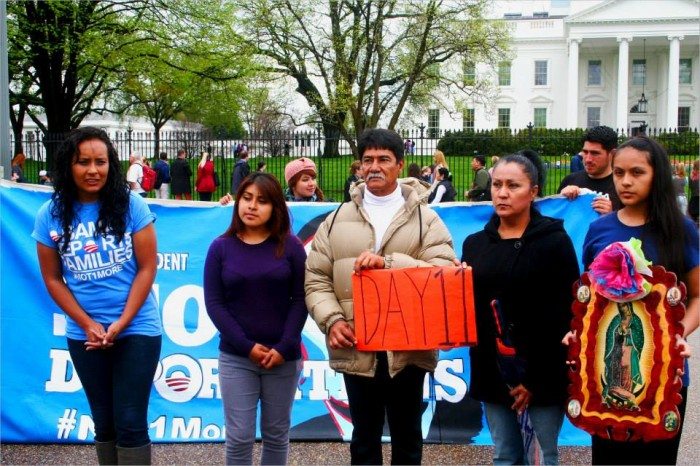 On the heels of the Philadelphia Mayor signing an executive order rejecting ICE holds in the city and a federal court finding in an Oregon case that the detainer requests violate the Fourth Amendment, members from Massachusetts will arrive this afternoon as part of their campaign to stop unjust deportations in their state by passing the TRUST Act.

Ernestina Hernandez, who took over the hunger strike from the Arizonans who began it and who has not eaten for the past 7 days, and her 13 year old daughter, Melanny Martinez, will pass the torch today to three Massachusetts women who have had their husbands taken from them by ICE, but not without Melanny first writing a letter to the President’s daughter of the same age:

…I wanted to write you a letter because I believe you could understand what I am going through. This might be a little odd and I don’t know if you will ever get to read this, but I thought it was worth a try… My dad was my hero… One of the saddest days of my life was April 3, 2014. It was my dad’s 50th birthday, but instead of us celebrating he was deported…

…My house is empty without him. I know I could have written this letter to your dad and ask him to help me. But I wanted to write it to you, because you are a daughter too and I think you love your dad as much as I love mine…

Melanny’s father, Manuel Martinez, was on hunger strike himself in the Joe Corley detention center in Conroe, TX when ICE deported him in retaliation.  That night Melanny had a dream that told her to continue her efforts to reunite her family and they decided to join the presence in front of the White House of families with loved ones in detention or already deported.

They will return to Houston today to hold a vigil at the detention center and be replaced in DC this afternoon by Santos Gutierrez, Marina Velazquez, and Magallela Morales who are part of a delegation from Massachusetts where they shut down the Suffolk Detention Center in a day of civil disobedience and are working to pass a state law, the TRUST Act, that would reduce unjust deportations and reject the Secure Communities deportation quota program by limiting local submission to ICE requests to hold people for extra time (recently ruled unconstitutional by federal court in an Oregon case).

The White House protest enters its third week with growing support and urgency as families’ loved ones continue in detention under the threat of deportation. Tomorrow labor leaders will visit the hunger strikers as a busload from the Day Laborer Congress in New Orleans arrives to expose CARI, described as ICE’s “Stop and Frisk” program piloted in New Orleans, through Congressional briefings and an upcoming protest at DHS.