A Temporary Ban on Public Art in Holyoke, Massachusetts?

UPDATE: MassLive reported news of the decision with detailed minutes of the decision. And apparently, the initial reports by Latino Rebels about an October 7 vote was accurate.

That came a day after the council voted 10-5 to override Morse’s veto of an order the council had approved Oct. 7 to establish an indefinite moratorium on public art installations. The step back was intended to give councilors and other officials time to debate the issue and possibly establish an ordinance, they said.

Such an ordinance was needed to address concerns like city liability in case someone was injured by a piece of art, like if it fell, and public notification guidelines for proposed public art pieces, councilors said.

Morse in his veto said an indefinite moratorium was unacceptable and without purpose.

“Public art contributes to our sense of community. It shows that we care about our public spaces. It challenges and celebrates, embraces and questions. It lends vitality to our neighborhoods. And it’s nothing new in the city of Holyoke,” Morse wrote in the veto.

Please note that an ordinance was NOT passed on October 7. Councilor Gordon Alexander submitted a late file order (which I made reference to in the post that you included above) and as you can see in the meeting minutes, it was REFERRED to the Ordinance committee. An ordinance HAS NOT been passed about this. What is in place at this moment is a moratorium (which I do not agree with). Please do not report misinformation that is completely inaccurate. It does not help in this process. If you have further questions, please feel free to contact me directly (since I am being quoted here) at councilorvalentin@gmail.com. I was one of the 5 councilors that voted “NO” to the motion of overriding Mayor Morse’s veto last night. I am also one of 3 Latino councilors in Holyoke. Thanks.

Yesterday we received a tweet from David Flores, telling us that a ban on public art was on the table in Holyoke, Massachusetts.

Flores is the artist who painted the “Isla del Encanto” mural that caused much controversy in Holyoke and is now displayed on City Hall. 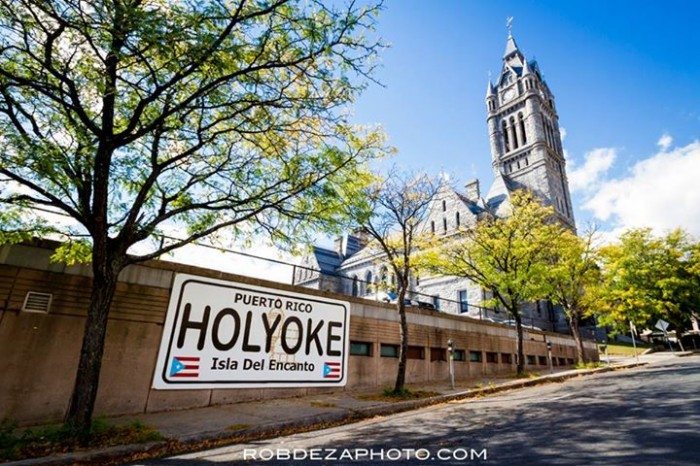 The news came as a surprise for us, according to the Council’s October 21 agenda.

The ordinance is not necessarily couched as an attack on David Flores’ mural, but rather as an effort to streamline the process to authorize the display of public art, but we cannot but think that the controversy around David’s mural, one celebrating Puerto Rican identity in a city with “the largest per capita settlement of Puerto Ricans in the United States outside the island of Puerto Rico” (around 45%), has to be related to the proposal.

While we were not able to find the ordinance in the City’s page (just the agenda), we were able to find it in a comment by Jossie Valentín in this public Facebook discussion. Valentín was one of five city councilors who voted in favor of Mayor Alex Morse’s veto, which was overturned. We hear that the other Council members who supported Morse are Dave Bartley, Dan Bresnahan, Gladys Lebrón-Martínez and Anthony Soto. 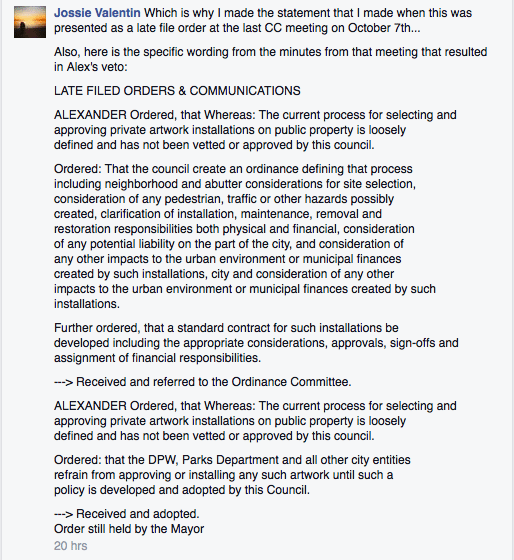 We are surprised that this kind of ordinance obstructing public art in Holyoke and passed a couple of weeks after the “Isla del Encanto” controversy didn’t get any coverage until now. This week’s City Council agenda calls the enactment a “late file agenda item” in the October 7 meeting. Was it filed late to avoid any attention? Why hadn’t any news circulated until Mayor Morse posted his statement about the veto? Much is going in Holyoke’s City Council and we look forward to getting more information.