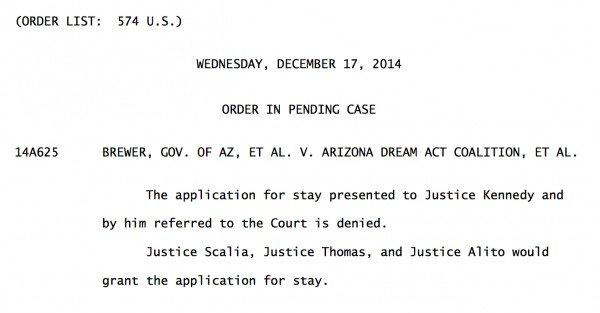 This lawsuit has been moving through the courts for years. Shortly after DACA was announced in 2012, the administration of outgoing Gov. Jan Brewer issued an order prohibiting beneficiaries under DACA to obtain driver’s licenses. A number of civil rights organizations joined forces to challenge the legality of Brewer’s order in federal court.

In July, the U.S. Court of Appeals for the Ninth Circuit, the federal appeals court with jurisdiction over Arizona, agreed with the civil rights organizations that Brewer’s policy was likely discriminatory towards undocumented youth and ordered the Arizona Motor Vehicle Division to treat them as they would other groups of noncitizens who can show employment authorization documents as proof of residency.

The case is not over: Arizona only requested a halt to the order forcing the state to accept DREAMers’ papers for purposes of driver’s licenses. The case is technically still “live” in the lower courts, which means there hasn’t been a definitive pronouncement that Brewer’s policy is unconstitutional.

But given the July ruling and today’s move by the Supreme Court, it’s likely Arizona will simply give up the fight and reach some sort of settlement with the plaintiffs. Who knows—maybe by the time Brewer leaves office, the policy denying DREAMers’ access to driver’s licenses will leave with her, too.

Cristian Farías is a writer and lawyer. You can follow him @cristianafarias.

2 responses to “Supreme Court to Arizona: You Can’t Block Driver’s Licenses for DREAMers”