Having had American-style democracy forced on it for over a century, the island of Puerto Rico is ruled by two political parties. The aptly named Partido Popular Democrático (the more popular of the two) halfheartedly pushes for greater autonomy under the current status and considers itself left of center. This is the party of the current governor Alejandro García Padilla, who’s also president of the party, and who demands the liberties of self-government from one side of his mouth and appeals for statehood privileges from the other. The so-called Partido Nuevo Progresista (part rival, part partner) seeks what the U.S. government has never offered and will never offer: statehood.

It’s true past referendums have included the statehood option on them, but the current status and independence were offered alongside it as well, which is like a slavemaster asking his oldest slave whether he wants to be adopted, remain a slave or be set free. It might seem obvious what the elderly slave would choose but, as four non-binding plebiscites (1967, 1993, 1998, 2012) in Puerto Rico have proven thus far, which option a colony of three and a half million slaves would opt for is not so certain. Plus you have to suspect the intentions of a professedly benevolent slavemaster who offers his captives subjugation through assimilation, subjugation through bondage or a risky independence. 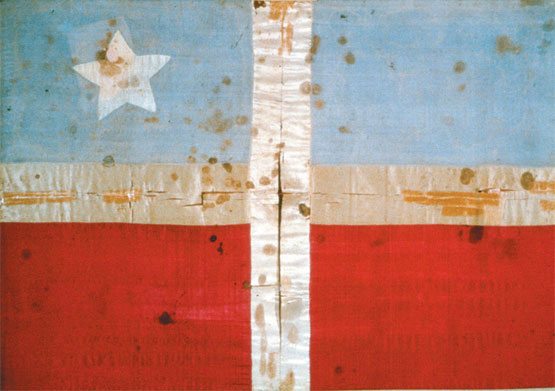 That the Partido Independentista Puertorriqueño forms the third party in Puerto Rican politics should tell us something—namely that, like many third-party platforms in the United States, the independentistas’ agenda is probably much more popular than electoral results admit. After all, the Green Party candidate Ralph Nader nearly earned himself a whole 3 percent of the presidential vote back in 2000, even though a Gallup poll conducted earlier that year showed an overwhelming majority of Americans believed environmental protection should be given priority even if it hurt economic growth. At the moment it’s widely accepted that while many Americans, especially on the left, may prefer Bernie Sanders’ pro-labor platform over Hillary Clinton’s pro-corporate brand of liberalism, the Vermont senator doesn’t have a chance of winning the Democratic nomination for president. It all comes down to electability, and when governments are controlled by self-serving factions, parties that address the interests of the people aren’t considered viable.

The word independence has become a bad word in the Puerto Rican vernacular. At best it’s met with a dismissive rolling of the eyes. Identifying yourself as an independentista might even make you the object of suspicion, just as anarchist or Scientologist does. Any person advocating the full independence of Puerto Rico is viewed as having wandered completely off the reservation. The same thing goes for anyone who owns one of those Guy Fawkes masks (though with legitimate reason in the latter case). Independence, as with all sound and just political causes, is considered practically out of the question. A lot of that has to do with 117 years of federal propaganda against independence and the persecution of anyone sympathizing with separatism. Considering that merely displaying the Puerto Rican flag or whistling “La Borinqueña” could send a person to prison for 10 years during much of the 1950s, it’s no wonder Puerto Ricans these days are a bit skittish about asserting their national identity. According to the feds, a Puerto Rican pledging allegiance to the American flag makes him a patriot, but pledging allegiance to the flag of the land he inhabits makes him dangerous.

Statehooders and those supporting some version of commonwealth status talk as though no colony has ever gained its independence before, as though an independent Puerto Rico would be sent adrift into uncharted waters. The newly liberated nations of Asia, Africa and Latin America demonstrate that it can be done, and how.

American history remembers a thing or two about decolonization even if the American people don’t. The Philippines —seized by the United States along with Puerto Rico in the American Imperialist War of 1898— was granted its independence on the Fourth of July in 1946. Having abolished slavery three decades before the United States, in the 1960s the United Kingdom one-upped its ascendant former colonies once again by beginning the process of decolonizing British Honduras (now Belize), Jamaica, Guyana, the Bahamas, Barbados and others. Suriname became independent from the Netherlands in 1975. While these former colonies aren’t exactly rolling in dough, they are able to elect their own leaders and pass their own laws without overseas approval. At the very least their economies aren’t on the verge of collapsing and sinking to the bottom of the Caribbean. 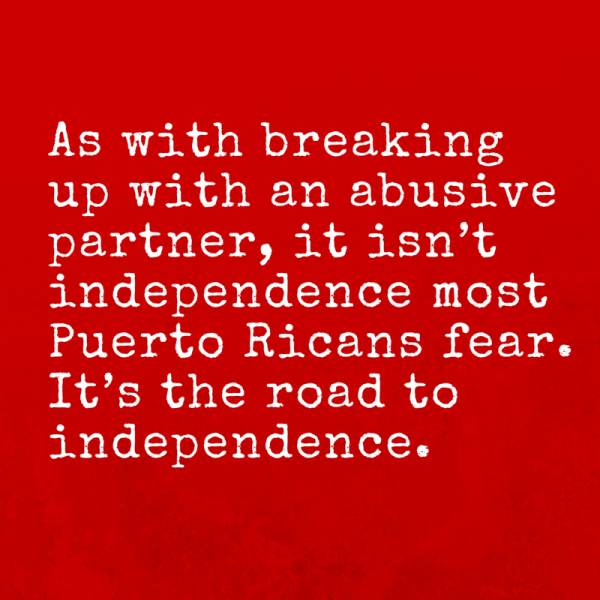 Looking around the region, Puerto Ricans can see what an independent Puerto Rico might look like politically and economically, but having belonged to someone else since 1509 (save those few, precious months in 1898), many are unsure of how the island would go about freeing itself.

Yet the road has already been paved. The late José Trías Monge devoted the closing chapter to outlining possible paths in his canonical text Puerto Rico: The Trials of the Oldest Colony in the World. Rubén Berríos has been pointing the way as president of the Partido Independentista Puertorriqueño since the 1970s. (For his part, Trías Monge was Secretary of Justice under Governor Luis Muñoz Marín, with whom he designed Puerto Rico’s constitution, and he later went on to serve as Chief Justice of the Puerto Rican Supreme Court. Point being: the man knew what he was talking about.)

Standing on the shoulders of such giants, we can see what can and must be done if the United States is to get closer to looking like a true democracy and Puerto Rico is to claim the universal right of all peoples to self-determination and independence as affirmed by the United Nations in 1960 (which also makes clear that a lack of political or economic readiness “should never serve as a pretext for delaying independence”).

Of course, should the United States grant independence today —via a joint resolution issued by Congress, for instance— Puerto Rico wouldn’t be left low and inundated. The United States and Puerto Rico together could form a committee to negotiate the terms of decolonization, making sure the island is on a strong and steady path to independence. To protect its interests, the United States could provide military protection and economic assistance, just as it does throughout much of Latin America already. (In fact it’s doubtful Puerto Rico could ever be truly independent while sharing the same hemisphere with the United States. Still, you must be willing to stand up to bullies.) All sovereignty over Puerto Rico’s domestic and foreign affairs would be transferred to the people of Puerto Rico and their elected leaders. This transitional relationship might resemble the ones the United States maintains with the free associated states of Palau and Micronesia, with the only difference being that Puerto Rico would be placed on a definite road to full independence.

The methods for Puerto Rico’s decolonization and eventual independence are so various and have been laid out so many times before, it would be presumptuous and tedious on my part to go through them all. Puerto Rican sovereignty comes down to what Washington and San Juan decide. The form decolonization will take ultimately depends on the willingness of the United States to liberate an island it no longer needs to subjugate, and the courage of Puerto Rico to take if even tentative steps toward independence. It can be done, it has been done and it must be done.

I can’t help but notice that this article was published the day after the 156th anniversary of the birth of Luis Muñoz Rivera, one of the most revered statesmen of the early days of U.S. rule, who pleaded before the U.S. House of Representatives: 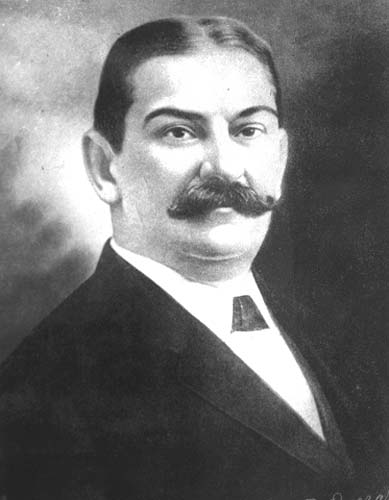 Give us now the field of experiment which we ask of you, that we may show it is easy for us to constitute a stable republican government with all possible guarantees for all possible interests. And afterward, when you acquire the certainty that you can find in Porto Rico a republic … give us our independence and you will stand before humanity as the greatest of the great, … a great creator of new nationalities and a great liberator of oppressed peoples.

These words were spoken in 1916 (Muñoz Rivera died later that year), when the island’s governor was appointed by the United States, and its official name was “Porto Rico.” That is how old this crisis is. That is how long people have been calling for Puerto Rico’s independence, on both sides, from Mark Twain to Luis Lloréns Torres, from Jane Addams to Mariana Bracetti.

One hundred and seventeen years is more than enough time for the United States to decide whether it wants colonies or not, whether it is going to treat the people of Puerto Rico as human beings or continue treating them as simply part of the fauna, and an overpopulated species, at that. For its part, Puerto Rico must cease playing the old battered dog—too timid to bite its master’s hand and too afraid to flee. The island’s current economic and health care crises either present the people of Puerto Rico with an opportunity to demand the basic rights so long denied them, or the situation will allow the United States to pound a crippled island nation further into submission. Now, after 117 long, blood-soaked and brain-battered years, is as good a time as any for the people of Puerto Rico to get off their knees and claim what is most valuable and only requires claiming.

Puerto Ricans have nothing to lose but the drain.

One response to “Puerto Rico and the Paved Road Untraveled”