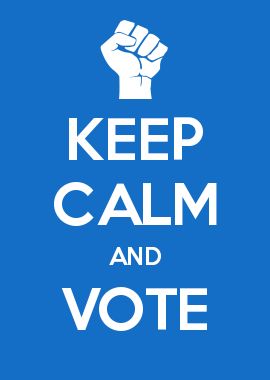 Do you really think Donald Trump can become the Republican nominee in 2016? Do you honestly believe the party will make Trump its standard bearer, and thus forfeit the White House (and maybe even the House of Representatives)? Not even right-wing pundits think that, as many are beginning to believe it’ll come down to either Senators Ted Cruz or Marco Rubio.

Trump’s polling at around 25 percent among Republican primary voters, which isn’t exactly an endorsement. If Hillary had a similar show of support among Democrats, her party wouldn’t be placing a tiara on her head just yet.

Then again, I guess it’s possible Trump could secure the Republican nomination. And, sure, he could go on to win the general election next November. But Latinos need only do one tiny thing to keep that from happening — they need to vote.

And when I say vote, I don’t mean at the measly 50 percent turnout rate that has been the hallmark of the Latino electorate for over a decade, leading many to consider Latino voters the sleeping giant in U.S. politics. No, no. It’s time to wake that lazy bastard up once and for all.

Some Latinos may be afraid of what Donald Trump might say or do next, but I’m afraid of what too many Latinos might not do when the time comes. And can you blame me? For all their activism and political discourse, Latinos have the lowest voter turnout rate among any racial or ethnic group in the United States. For most Latino voters, “Sí se puede” is more like “Si podemos.”

Plus there’s the painful fact that many Latinos are ineligible to vote because they’re still green card holders. Of the 24 million Latinos eligible to vote in the 2012 presidential election, a full 11 million chose not to, but there was another five million who were permanent residents and therefore not allowed to vote.

A 2013 study conducted by the Pew Research Center showed that among the five million Mexican immigrants eligible for citizenship, only 36 percent have applied. Since Mexicans make up over half of all permanent residents in the United States,  the fact that so few are becoming naturalized citizens — and eligible voters — poses an electoral crisis equal to the issue of low voter turnout.

As for Trump, nothing is more widely known to be true about the average American voter than the fact that anger brings people to the polls on Election Day as much as hope does. Hence why I’d hate to see Trump silenced so soon. Let’s hear what he has to say about Latino immigrants. In fact, let everyone here what he has to say. Let him blabber on about how dangerous Latino immigrants are until one of two things happen: either Latinos get so angry that they manage to get more than half of their voters to the polls, or mainstream Republicans become so embarrassed by their party that they just go off into the woods for a while.

But should Trump win the Republican nomination and actually make it to the White House, it won’t be because he was allowed to host Saturday Night Live. It’ll be because you — or Latinos you know — couldn’t be bothered on Election Day.

That’s why presidential candidates and other politicians think they can get away with disparaging Latino immigrants. They know they’ll receive a little backlash from a vocal minority of Latinos but, when the moment counts (literally), Latinos will go back to not doing what they always don’t do. Latinos must register and vote in large numbers, if only to put the fear of Juan into some of these elected officials.

Let’s face it, Donald Trump isn’t going anywhere anytime soon. He is America’s id incarnate, and will remain popular among the same hateful, bigoted minority that has plagued this country since its founding. I have no doubt we will hear more anti-Latino, anti-Black, anti-immigrant, anti-woman, anti-gay and anti-working class rhetoric from Trump and and other political campaigns, at all levels of government, for years to come. Let them speak — and bury themselves.

In the meantime, keep calm, and vote.