10 Times Marco Rubio Turned His Back on Immigrants 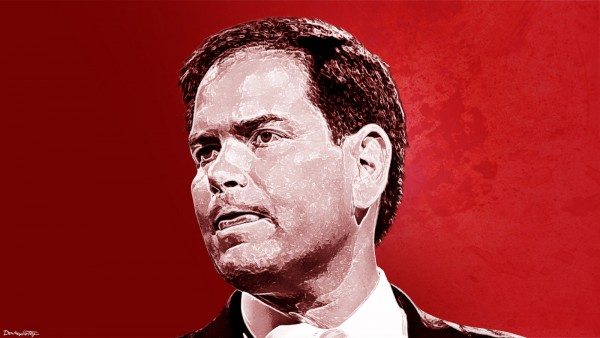 Senator Marco Rubio (R-FL) comes from an immigrant family, but has no problem stepping all over the immigrant community to propel his political career. As a presidential hopeful, Senator Rubio trades on his family’s immigrant experience, while simultaneously advocating policies that keep immigrants down.

Here are ten moments on Rubio’s timeline that pro-immigration voters are unlikely to forget.

1. Marco Rubio Hitched a Ride on the Republican Border-First Bandwagon

Before he even entered the halls of Washington, Rubio advocated a “secure the border first” approach to immigration reform.

Of course, with record levels of enforcement and deportation already the reality, this is actually just a cynical excuse for inaction, one that immigrants and experts can see from a mile away. As the Wall Street Journal put it in 2013: “Republicans who claim we must ‘secure the border first’ ignore the progress already made because their real goal isn’t border security. It is to use border security as an excuse to kill immigration reform.”

Rubio’s piecemeal vision for immigration reform starts with the “securing the border first” and, practically speaking, ends there too. It is the height of circular logic: we can’t reform immigration until the border is secure, but the border will not be deemed “secure” until we end unauthorized migration, which cannot be ended without reform. So we turn up enforcement, and never move on to the other parts of reform. It gives a policy-sounding argument to continually move the goalposts so that nothing is done for 11 million undocumented immigrants settled in our nation.

In 2010, congressional Democrats planned to take up the DREAM Act in a lame duck session of Congress. Marco Rubio, who had just been elected Senator from Florida, expressed his opposition, calling the measure “too broad:” “But the DREAM Act, as I have read it, goes well beyond that. It’s much broader and is not the right approach to that issue. In fact, it makes having a legal immigration system that works harder to accomplish. I have the same position I had during the campaign.”

With no thanks to Rubio, the DREAM Act actually passed the House and won a majority in the Senate. However, it failed to meet the 60 vote threshold it needed to become law, because senators like George LeMieux, who was keeping Rubio’s Senate seat warm, voted against it.

This left Dreamers without any protection from deportation until the President created DACA.

3. Marco Rubio Promised to Introduce His Own DREAM Act, But Never Did

Take a look at this video, where Marco Rubio discusses his plans to introduce his own version of the DREAM Act.

The measure was never filed by Rubio, nor did he explain how his legislation would get through a Republican-controlled House of Representatives where opposition to any version of the DREAM Act was strong enough to block it.

When it became obvious that Rubio was enjoying the media limelight but was not serious about moving legislation, President Barack Obama decided to move the ball forward under his existing executive authority. The result was Deferred Action for Childhood Arrivals (DACA), another pro-immigrant measure Rubio opposes.

After failing to follow through with his own version of DREAM Act, Marco Rubio went on to criticize President Obama for creating DACA, despite the policy’s benefits for own constituents and similarities to his own, never-released legislation. Rubio called the DACA plan a “bureaucratic nightmare” and said, “When the president ignores the Congress, ignores the Constitution and forces a policy like this down the throat of the American people, it’s going to make it harder to have a conversation [about legislative reform].”

Of course, everyone knew Republicans were not planning on having a “conversation” about legislative reform, not in that election year. Obama only acted after the community rose up against his unrelenting deportations, and rather than support policies that help the community, Rubio chose once again to criticize.

5. Marco Rubio Pledged to End DACA as President, Whether Congress Passes Replacement Legislation Or Not

In 2014, Rubio joined with the rest of his Senate Republican colleagues in an attempt to end DACA and told Politico that he would “love to defund the immigration order.”

Then, on the campaign trail in New Hampshire, Rubio told reporters: “DACA is going to end and the ideal way for it to end is that it’s replaced by a reform system that creates an alternative. But if it doesn’t, it will end. It cannot be the permanent policy of the United States.”

United We Dream-Action issued an immediate response. Jassiel Perez, a United We Dream-Action leader from Florida and DACA recipient said: “Let’s be clear: by taking away my DACA, Sen. Rubio wants to deport me, and hundreds of thousands of immigrant youth. This is a personal attack and is further proof that he does not stand with the immigrant community.”

6. Marco Rubio (Once Again) Abandoned his Own Immigration Reform Bill

Think Progress has an excellent timeline on Rubio’s attempt to champion immigration reform before deciding to abandon his own comprehensive bill in 2013. The timeline vividly illustrates how Rubio began the transformation from champion to opponent of his own piece of legislation before the bill had even cleared the upper chamber.

In early May 2013, Rubio was confronted by DREAMer moms in the halls of Congress and he assured them of his support, stating: “I don’t want you to worry about me [supporting immigration reform].”

On May 24, 2013 Rubio appeared on Fox News and urged senators to support his bill.

On June 4, 2013, he told Hugh Hewitt that he would consider voting against the legislation. Additional border provisions were ultimately attached, and Rubio voted aye. But by October 2013, Rubio had transitioned so far that he didn’t even want the House to pass a limited bill that could lead to a conference with the Senate.

So much for being a champion.

7. Marco Rubio Talked Down to Dreamers

It’s no secret that there has been some tension between immigrants, activists, and Marco Rubio. (Witness his hallway meeting with Dreamer moms in May 2013).

In August 2014, Rubio was confronted at a fundraiser by Florida Dreamers with United We Dream over his opposition to DACA.

After unfurling a banner that read, in Spanish “Rubio wants to deport me” and asking why their senator won’t stand up for them and their families, the young people were booed, blocked, and escorted out of the event. Rubio’s response showed his complete lack of understanding: “You [Dreamers] are hurting your own cause. They are hurting their own cause, because you don’t have the right to illegally immigrate to the United States.”

This may be technically true — not everyone qualifies for the same policies as Rubio’s family. But it also shows a lack of compassion and connection to the struggles of today’s immigrants, proving once again that Marco Rubio truly is no champion.

After benefitting from family-based immigration policies, Marco Rubio has pledged to pull up the ladder on future immigrants just like him. This is Rubio speaking at a Republican presidential primary debate:

Rubio uses a Republican code word, “merit-based immigration”, which really means “elite immigration” to some in the GOP base. In this world, engineers and scientists may qualify for green cards, but not farmworkers and bartenders with American family members. The policy is particularly offensive since Rubio trades on his parents’ immigration story and work ethic often in this campaign. As president, he would deny the same opportunities his parents had to others.

In October 2015, Senator Rubio voted in support of Senator David Vitter’s anti-immigrant proposal, a bill that was largely inspired by Donald Trump. The legislation would undermine the relationship between immigrants and their local police, a relationship that is needed to promote community safety.

The legislation is opposed by some in law enforcement for this very reason. But that fact was not compelling enough to Marco Rubio, who claimed: “No one involved in this debate understands this issue better than I do. I understand immigration, the good, the bad and the ugly, but this part is not good — this part about people who are openly violating our laws.”

Rubio claims to “understand” immigration, but his policy positions show that he’s more in line with the restrictionist wing of the GOP than with immigrants. And this was not the only time Rubio fell victim to the Trump Effect: just look at his Trump-inspired stance when it comes to shutting down mosques. With these positions, Marco Rubio is not and cannot be a leader for the immigrant community.

Marco Rubio loves to share his family story — how his parents came from Cuba in search of a better life, worked hard, and pursued their version of the American Dream. However, Rubio seems to forget to mention the advice his mother once left him in a voice mail:

Maybe Rubio doesn’t mention his mother’s advice because he doesn’t exactly follow it.