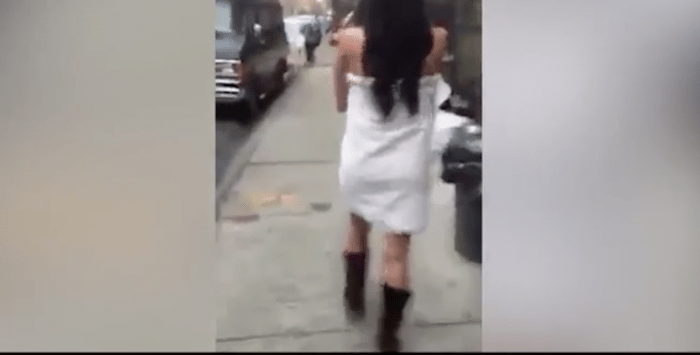 A New York man has been charged with choking, endangering the welfare of a child, coercion and assault, stemming from a video that he recorded of him forcing his girlfriend to walk outside in just a bath towel in Harlem for allegedly talking to other men. The incident surfaced after Jasson Melo subjected his 22-year-old girlfriend to this “shame” walk in retaliation for alleged infidelity, which he recorded and then posted to his social media account.

According to the victim, Melo beat and choked her before forcing her to walk outside in just a towel while he verbally abused her. It has been reported that their three-month-old child was home when the incident occurred. Melo also allegedly threatened to kill her if she did not walk outside naked as a form of punishment for her alleged actions.

Sadly, domestic violence is a widespread problem for Latinas. Casa de Esperanza: National Latin@ Network, a U.S. non-profit organization, revealed in a 2015 study that “more than half of the Latin@s (56 percent) in the U.S. know a victim of domestic violence.” Further, it is estimated that “one in three Latinas have experienced domestic violence.” While it is difficult to estimate the frequency of intimate partner violence due to stigma related to disclosing the violence and fear of being ostracized for reporting the violence, a 2008 Centers for Disease Control study estimates that “one in four women is abused by a current or former spouse, partner or boyfriend at some point in her life.”

Melo is facing the consequences for his actions. He was arraigned Thursday night on charges of choking, endangering the welfare of a child, coercion and assault. The First Lady of New York issued a statement in support of the victim and other individuals who suffer from intimate partner violence and other forms of violence. She said: “The video displayed verbal abuse, forced humiliation, and harassment by the alleged offender, directed at his wife. Posting that video online perpetuated the abuse, which New York City does not tolerate. We are steadfast in our efforts to make sure all victims of abuse are aware of the many resources available as we strive to make New York City’s public and private spaces safe for all women and girls.”

The 22-year-old victim spoke with Nayeli Chavez-Geller of Primer Impacto, asking: “What woman would like to go out on the street naked and he’s recording her, insulting her?”

While there have been individuals who have commented on his social media account in support of his repulsive action, Melo has rightfully caught ire from individuals who were appalled by his abusive behavior, including the subsequent disgusting social media posts where he appears to proudly boast of his actions.

If you or anyone you know is a victim of violence, help is available. Contact the National Domestic Violence Hotline at 1-800-799-7233 for information and resources.

One response to “Domestic Violence Is Never Entertaining”