In response to Thursday morning’s Supreme Court decision that essentially blocked President Barack Obama’s 2014 executive order on immigration that would have expanded the Deferred Action for Childhood Arrivals (DACA) program and created the Deferred Action for Parents of Americans and Lawful Permanent Residents (DAPA) program, some of the country’s top immigrants rights groups have already said that they will continue to fight for real reform and change, even if it means pressuring Obama to take an even stronger stance.

United We Dream’s Facebook page has an 18-minute video from outside the Court where undocumented organizers express their hope to push for real change. 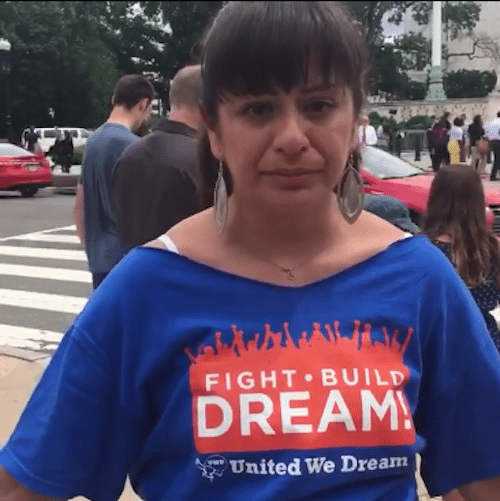 The group also wrote a Medium post, explaining where the fight for immigrant rights goes next. Here is an excerpt:

Since this was a split four to four decision, we also still have legal avenues available. The case can come up to the Supreme Court again, either through a request for a rehearing by the Department of Justice or through an appeal on the decision based on the merits – rather than the injunction that was at hand today. We will continue to explore these and other legal options.

The ball is back in the court for President Obama. His record breaking deportation numbers have run unabated and the use of immigration raids have struck terror in immigrant communities. We will call on President Obama to end these injustices against our community. At the same time, we’ll be focusing on president candidates to recommit and provide answers on how they will provide relief for undocumented immigrants.

In the meantime, learn how to form MigraWatch groups in our cities to teach, know, and exercise our rights. We can form volunteer groups to run the nationwide MigraWatch Hotline (1–844–363–1423), where we can report ICE and Border Patrol activity.

DRM Action Coalition issued this statement: “Let’s be clear that this is not a defeat. We are confident the law is still on our side, and that we will win. We knew this was going to be a difficult path with an 8 judge court, but this just means that our fight for DAPA will take a bit longer. We need to continue to push, and cannot leave this decision to a President that is not progressive on immigration.”

This is what Obama said via a tweet from the White House:

“Immigration is not something to fear…What makes us American is our shared commitment to an ideal” —@POTUS: https://t.co/9P7ZJ312W0

This is Alvarado’s full statement:

President Obama’s response to the impasse in the Supreme Court was woefully inadequate. In the wake of the Supreme Court’s shameful ‘non-decision’ in Texas v. US, immigrants are left to organize in defense of their basic rights in the face of unprecedented hostility. Rather than joining them, the President adopted a defeatist attitude, even going so far as to suggest there is simply nothing more he can do to help immigrants and refugees.

That is flatly wrong. In his last six months, the President can—and must—at a minimum: (1) end his misguided ‘PEP-Comm’ program that criminalizes immigrants by using sheriffs as de facto deportation agents; (2) grant temporary protected status to Central American families fleeing horrific violence in their home countries; (3) stop the record-breaking deportations his own administration has championed and (4) take a strong, principled stand against the xenophobic nationalism sweeping the country during this election season. This is the minimum.

Immigrant families don’t have the option to give up their struggle simply because the Supreme Court got it wrong today. Immigrants must now demonstrate the courage that is lacking among our political leaders, including President Obama.

Ultimately, this morning’s speech will not stand up to historical scrutiny. His immigration policy has been incoherent. By his own admission, he relied heavily on border enforcement and deportations in a failed gambit to win legislative reform in a broken Congress. In the current political climate, it is unacceptable to say that nothing else can be done. His own policies contributed to current mess. He has seven months to start cleaning it up.