Aris Mejías Braves the Storm in THE VESSEL 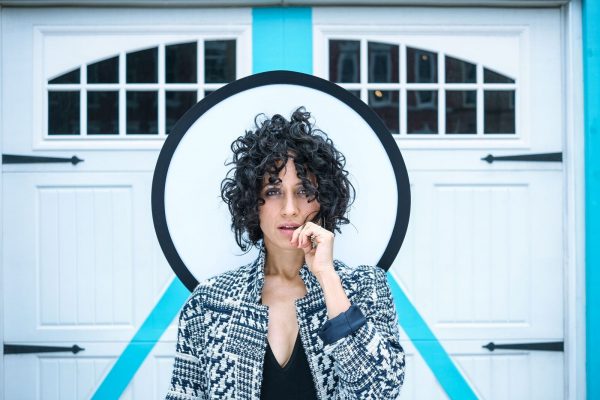 While the Zika virus supposedly massacres Puerto Rico’s population, and the massive debt apparently threatens a pseudo-political coup, a wonderful drama was filmed starring Martin Sheen and Elia Enid Cadilla: The Vessel. First-time writer-director Julio Quintana tells the story of a small Latin American village grappling with the devastating effects of a tsunami that destroyed a local school a decade before. Sheen plays a priest, Father Douglas, who alongside three other main characters (Leo, Soraya, Fidelia), helps the town overcome its harsh reality and change the path of self extinction.

The drama stars Puerto Rican actress Aris Mejías, who plays Soraya. This mysterious and reclusive widow embarks on an emotional awakening with Leo that serves as a catalyst for the town’s redemption.  Mejías —considered one of Puerto Rico’s foremost performance artists— began her career as an actress in national and international film productions such as Cayo, The Caller and Che.

In light of this wonderful somewhat religious piece, I outreached to la comadre Aris, and talk about her work on this fascinating film.

Marlena Fitzpatrick: Must ask first, how was the casting process?

Aris Mejías: The casting process was unreal, the kind of thing you only see in movies. I was initially hired for a supporting role of an incredibly beautiful and poetic character named Mariela. This character had lost any desire to have children until she had a particular dream about a tsunami, which she narrates to the town priest. That dream marks a moment when she realizes she does want to conceive. It was a beautiful but painful text. I felt a deep connection to this character, as I have been dreaming of tsunamis since I was growing up in Puerto Rico. I could not believe that someone unknown to me could dream up a scenario so similar to my personal dreams. It was as if someone had read my diaries, and I somehow knew that I was meant to be in this movie. I know it sounds a bit out there, but I just knew it.

I didn’t hear from the production for a while after the audition and assumed someone else had gotten the part. Suddenly, I was called back for a reading. I had no idea I was being offered one of the leads until much later during the reading. I was speechless when they told me I was to play the character of Soraya. I remember I started crying when they told me. And then, the casting director said, “Martin is looking forward to meeting you,” and I said, “Wait, Martin who?” I got an even bigger shock when they told me that Martin Sheen was a co-star and an even bigger surprise when they said that Terrence Malick was the executive producer. I don’t even remember how I was able to walk out of the room. I couldn’t feel my knees. It was such an honor. 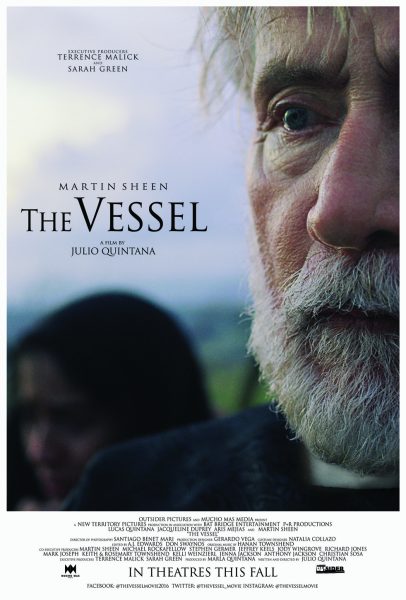 MF: Now what I find interesting is that the film was shot simultaneously as two different films: one in Spanish and one in English. Which version did you find more challenging?

AM: You know, what is interesting is that while I am definitely a Spanish speaker, I found such great inspiration playing around with both languages. On the one hand, Spanish is the language I first fell in love with, played, cried and felt all of life’s initial experiences in. I began acting in Spanish, so it always feels the most comfortable to me.

Nonetheless, English has been a big part of my upbringing and I feel confident about it. I’ve always been an avid reader in both languages, so I loved going from one to the other. Having the ability to play with the text in both languages allowed me to access a much wider range of emotions. I’d like to think it added depth and texture to the role.

That said, I do have an accent, but I have found that American audiences are opening up to a wider range of accents. When you work in other markets, like in Europe, Asia or South America, having a variety of accents on screen is quite normal. The U.S. is slowly catching up. This movie is part of that change. Studios will realize that bilingual actors provide more flexibility and bring valuable production tools to the table. 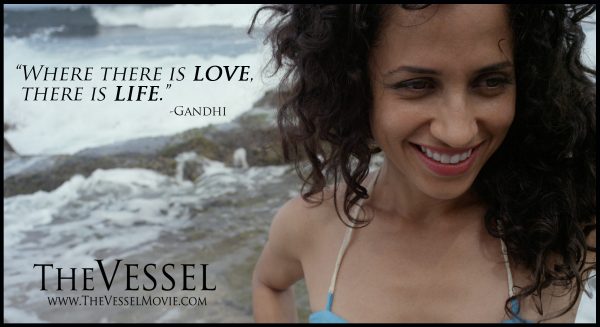 MF: Is the cast and crew mostly Latino?

AM: The cast is pretty much Latino! We shot in Puerto Rico and the majority of the actors are Puerto Rican. The writer and director is Cuban American, as is the main actor, the producer Marla Quintana is Colombian, Marin Sheen is of Latin descent. It felt incredibly exciting to be part of such an inclusive project, of a project that nourished Latino talent in such a big way.

MF: Now, even though the film was shot in Puerto Rico, it tells the story of a Latin American village. Which country?

AM: The script is written to evoke a Latin American village, not necessarily pinpoint a geographical town or country. In that sense, the film has that element of magical realism, reminiscent of Gabriel García Marquez, where the action takes place in a very precise and particular place that at the same time could very well be any place.

MF: Soraya, your character, is a very young widow who embarks in a new “love” journey with Leo, played by Lucas Quintana. What’s the biggest transformation Soraya shows through her story?

AM: Soraya’s story is about the capacity to love beyond pain. She lost a husband and dreams of a future, but is not able to re-envision her life. She is part of the town’s overall despair and does not realize that while it is good to feel comfort in shared pain, it also becomes a imprisoning situation. Falling in love is her act of defiance.

MF: Well, what do you have in common with Soraya, if anything?

AM: I think I am not so similar to Soraya although I absolutely empathize with the character and fell in love with her particularities. I am a truly inquisitive and restless person. I will look for change immediately when things are not working even if they are painful. I am also not a person to tolerate imposed restrictions. Soraya has a quasi self-imposed suffering that would drive me crazy. It was interesting to embody this soul and search for honest answers to her behavior.

On the other hand, I gave Soraya, the sense of smell. I am a very sensorial person, and when the script mentioned Soraya’s books, I immediately told Julio that the smell of the books might trigger memories for Soraya. This became a backbone of the character. The books and her sense of smell became part of the script and storyline. 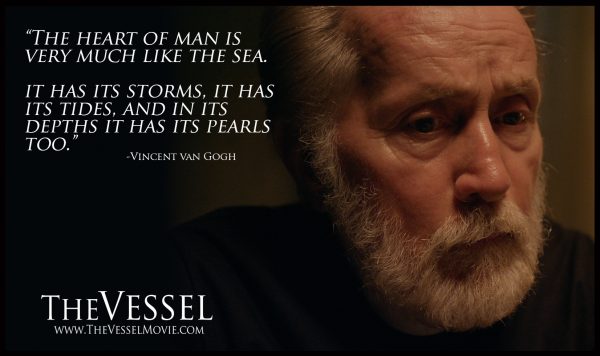 MF: The village was destroyed by a tsunami a decade before and a priest, played by Martin Sheen, mobilizes an action plan to save the small town. What are the socio-political or religious ramifications in this story?

AM: To talk about socio-political ramifications in this story, we would have to ground our story on a particular place in time and history, which the script specifically does not. We could talk about it in broader human terms. The psychology of living in small towns brings tight-knit communities to a standstill in regards to change and to embracing new ways of thinking. Curiously, slow-paced communities preserve customs and traditions which I personally value most in the modern fast paced world. So there’s that tension between past and present, moving forward and staying put; of inherited trauma; of losing and regaining faith.

This script also touches on archetypes that overcome adversity to regain faith in life; stories that echo The Epic of Gilgamesh, The Bible and Greek tragedies. In all of these writings you can find characters that question divine events to later find solace in regaining faith. Those stories are really human stories that may not speak to a specific political moment in history but provide a rich exploration of the human condition.

MF: Speaking of faith and human condition, is Soraya a feminist? Is she an activist implementing changes for the village’s educational system?

AM: Soraya is not a feminist and it is important within the story that she not be a feminist because it is through her that we will learn how the town is self-suffocating. She is part of the emotional maelstrom of the town’s suffering, yet she is one of the first to embrace change and acknowledge her need to fulfill it. So while she may not be a feminist in the way that I am a feminist, circumstances push her to develop agency, become an agent of change. 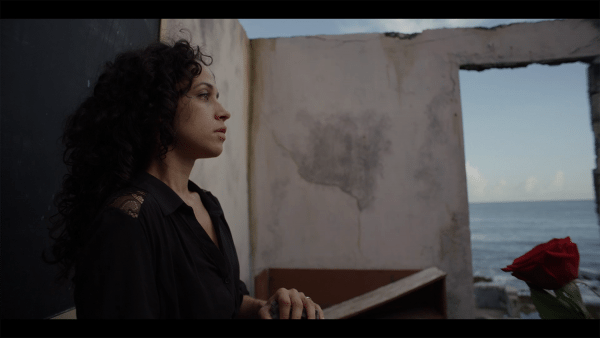 MF: You worked with Benicio Del Toro in Che. Now you’re working with Martin Sheen. Which other Latino actors would you like to work with and it what genres?

AM: I have deep respect for many Latino actors. Soledad Villamil and Ricardo Darin have to be one of my favorite duets on camera. You have to see El mismo amor, la misma lluvia and El secreto de sus ojos—both so intense and marvelous. But my admiration also depends on genre and context. For example, I am a fan of Kate del Castillo (Reina del Sur) and Andres Parra (Patrón del Mal). These productions are more of a telenovela structure, but both characters have spark and charisma, that allows them to sustain their characters throughout numerous seasons without losing the freshness. This is monumental and admirable work. Generally what defines my interest to work with a particular actor is their dedication, consistency and their brutal honesty to the craft. any actor with those characteristics would be ideal partners on any set up.

I just worked opposite with amazing multi-talented Pedro Capó, who nailed a twin character interpretation for a production called Sol de Medianoche. My character is his neighbor, confidant and girlfriend, Nadja, a very strong and liberated woman. She’s very different from Soraya but equally interesting and complex. I’m pretty sure you would like her at Latino Rebels!

MF: And on that note, of course I will ask: what is your definition of a Latina Rebel?

AM: Latina (woman) rebel, wow. Woman or no woman, the rebel is someone who is willing to search, dig deep to find answers and later on is not afraid to ask again.

MF: Never afraid! Congratulations on such a wonderful film.

One response to “Aris Mejías Braves the Storm in THE VESSEL”