Editor’s Note: An earlier version of this post was published in The Conversation. The author has granted us permission to republish. 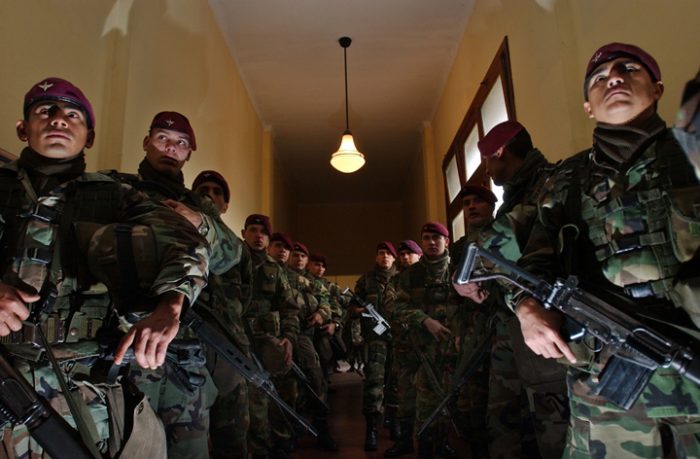 A few weeks before the Mexico’s 2006 election, La Familia Michoacana —among the most vicious of Mexico’s major drug cartels— tossed five severed heads onto the dance floor of the Sol y Sombra night club in Uruapan, Michoacán, along with a message outlining its strategy for targeted killings, which it called “divine justice”.

As this gruesome incident rekindled the debate on national security, candidate Felipe Calderón, who went on to win the election, made a campaign promise: to fix the country’s drug problem. Calderón would be only the second Mexican leader who did not hail from the Partido Revolucionario Institucional (PRI), which had ruled for most of the 20th century. His campaign presented him as the only honest alternative to the PRI’s corrupt legacy. “My hands are clean”, claimed his ads.

On December 11, 2006, days after taking office, Calderón launched the “Operativo Conjunto Michoacán” (Operation Michoacán), sending some 6,500 soldiers, Marines and federal police to the state. Its aim, according to minister of the interior Francisco Ramírez Acuña, was to “take back” a country that had been “seized” by organized crime. He also asked Mexicans for patience, cautioning that the fight would take time.

All this was exactly 10 years ago. Today, Mexico’s drug war rages on, virtually unchanged. It is time to ask: what has the decade-long cartel strategy achieved?

As one must when assessing war, let’s start with the casualties. 150,000 people have died in Mexico’s drug war since 2006, and another 30,000 are missing. Many victims of this decade of murder and grief have been unheralded, but some have made the headlines: 22 civilians summarily executed by the army in Tlatlaya, 43 students who disappeared without a trace in Ayotzinapa in 2014. 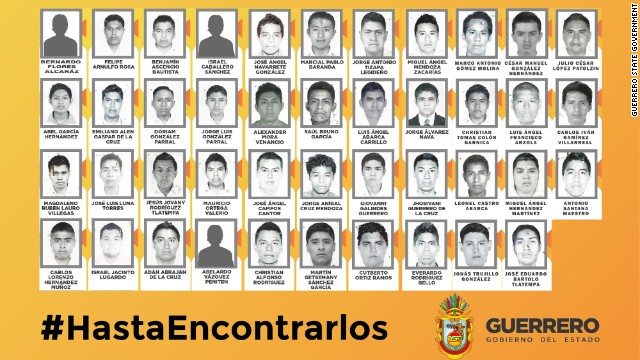 Despite this violent law enforcement, drugs have continued the steady flow north to the United States, the world’s largest consumer of cocaine; 84% of that cocaine enters via the Mexican border. Between 2005 and 2011, the height of Calderón’s war, the U.S. Border Patrol seized 13.2 million pounds of marijuana. In 2015, Border Patrol seized more than 2 million pounds of all sorts of drugs.

The establishment of the DEA was a direct result of Nixon’s 1971 announcement that “America’s public enemy number one is drug abuse.”

Since then, both the U.S. and Mexico have fought that war, at great cost. Mexico has spent at least $54 billion on security and defense, with U.S. donations of at least $1.5 billion. That amount includes the Mérida Initiative, a security-based aid agreement that included special aircraft and training for pilots to confront cartels from the air.

In Mexico, the armed forces have been turned against the Mexican people, and have gradually established a record of violating human rights. Under Calderón, Mexico’s National Human Rights Commission saw a significant increase in citizen complaints of abuse. In the first two years of Calderón’s successor Enrique Peña Nieto’s administration, the army accumulated 2,212 complaints—541 more than those lodged against the military in Calderón’s first two years.

The war is thus problem for both Mexico and the United States. But the U.S. has managed to stay righteous while quenching its thirst for cocaine and other drugs. And American weapons and drug money laundered by big-name banks continue flowing south into Mexico.

Doing It for the Kids

Calderón assumed the presidency amid a turbulent struggle with the supporters of Andrés Manuel López Obrador, his left-wing opponent in the 2006 elections. López Obrador claimed fraud and challenged the election results in court. Though Calderón was unanimously declared the winner, López Obrador refused to recognize the decision, calling Calderón an “illegitimate president”.

Aguilar and Castañeda argue that, in 2006, the Mexican government needed an enemy: the drug cartels handily played this role.

Publicly, Calderón’s main justification for waging war on drug traffickers was a supposed increase in consumption among Mexico’s youth. He coined a simple slogan —“Para que la droga no lleguen a tus hijos” (“Keep the drugs out of your children’s reach” – and recruited masked Lucha Libre wrestlers to reiterate his alleged concern for Mexican kids.

Calderón’s claims were groundless. According to data provided by both the Mexican National Council on Addictions and the United Nations, drug use in Mexico is very low (for international comparison, see this interactive map of consumption).

Today, as in 2006, Mexico remains a transit country for drugs and not a major consumer of drugs.

Calderón’s true motives for launching the war were probably a combination of the need to legitimize his government domestically and strengthen his strategic relationship with George W Bush. However, in a forewarning of today’s post-truth era, the fact that Mexican children didn’t actually do drugs didn’t stop him from justifying a war in their name.

Calderón wasn’t a cartoon tyrant. He is a savvy lawyer, and a careful observer of society and politics.

The president knew he couldn’t rely on the police, whom 90% of Mexicans feel are corrupt, to undertake his crusade. They’re also outrageously inefficient: an estimated 99% of crimes go unsolved. Now that’s impunity.

Mexicans believe in three institutions: family, the Catholic Church and the army. Calderón thus adopted the U.S.’s favored policy of sending the army into the streets to fight drugs.

His shrewd decision may have initially pleased the Mexican people and their American neighbors, but it didn’t have the support of the constitution. According to article 129, no peacetime military authority may perform functions not directly connected with military affairs. In other words, the military cannot do the job of the police.

Zedillo’s policy was legally challenged, but in 2000 the Court decidedthat, under the Mexican constitution, the armed forces can legitimately perform law enforcement functions. And thus: the legal basis for Calderon’s cartel war.

As Professor Desmond Manderson has noted, the law is a time machine: the real problem with bad law isn’t its immediate implementation but how it can be used in the future.

Since 2014, president Enrique Peña Nieto has persisted with Calderón’s approach, with the clever twist of not publicizing it so much. Journalist José Luis Pardo has observed that the current president is like a teenager who, in trying to rebel, repeats what he’s seen his father do.

Today, organized crime accounts for nearly 60% of the more than 15,000 homicides recorded in Mexico. August and September 2016 were the deadliest period in almost 20 years.

What Is to Be Done?

The supply-side response to a problem driven by demand has not made a dent on drug trafficking.

Even General Salvador Cienfuegos Zepeda, Mexico’s minister of defense, seemingly thinks this is a bad idea. On December 8 he declared that fighting the war against drugs has “denaturalized” the Mexican military. “None of us studied to chase criminals”, he said.

Ten years after Calderón sent troops to Michoacán, Mexico has a choice: change or perish. We can start by accepting that we will never eliminate drug consumption. Using drugs is a personal decision and a health issue, not a criminal one.

Drawing from the recent recommendations of the Global Commission on Drug Policy, Mexico can outline a policy agenda that decriminalizes personal use and possession of drugs while implementing alternatives to incarceration for low-level suppliers. (Full disclosure: I recommended decriminalization as a member of the transition team of Calderón’s PAN predecessor, Vicente Fox. I’m haunted by the consequences of the government’s failure to do so.) It should also consider moving toward regulating the drug market, as Uruguay has done with marijuana, from production to distribution.

Decriminalizing both the supply and consumption of something as transnational as drugs can only succeed if it’s embraced on both sides of the border. Even under a Donald Trump presidency, lobbying for decriminalization in the U.S. would be a wiser use of Mexico’s resources than bemoaning Americans’ taste for Latin American drugs. 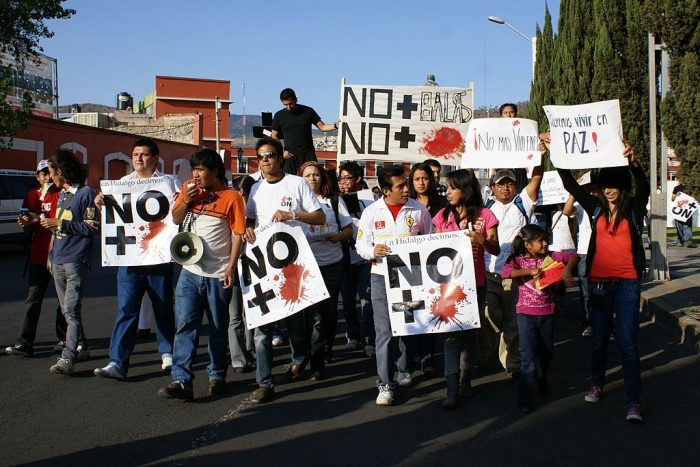 Decriminalization must necessarily be accompanied by demilitarization. Two recommendations from UN High Commissioner for Human Rights Zeid Ra’ad Al Hussein can guide this process: first, to strengthen the capacity of Mexico’s police to protect public safety while respecting human rights and second, to adopt a time frame for withdrawing the military from public security functions.

In 1996, President Bill Clinton’s drug tsar Barry McCaffrey said that a war waged against a shapeless, intangible enemy as drugs can never truly be won.

In recent years, the U.S. has been heeding its own advice and winding down the domestic war on drugs. President Barack Obama has declared that addiction should be addressed as a health problem. In the November 2016 election, nine states considered liberalizing cannabis laws. Four approved recreational marijuana, including California, the world’s sixth-largest economy. Residents in a total of eight states, plus the District of Columbia, can now legally take marijuana.

With Colombia having similarly scaled back its violent anti-narcotics strategy, Mexico is now almost alone, in the unpleasant company of authoritarian firebrands such as the Philippines’ President Rodrigo Duterte, in waging war against a shapeless abstraction.

Here’s to ending this 10 years of tragedy with a smarter new beginning. In an authentic republic, citizens —not soldiers— look after each other’s security and liberty.