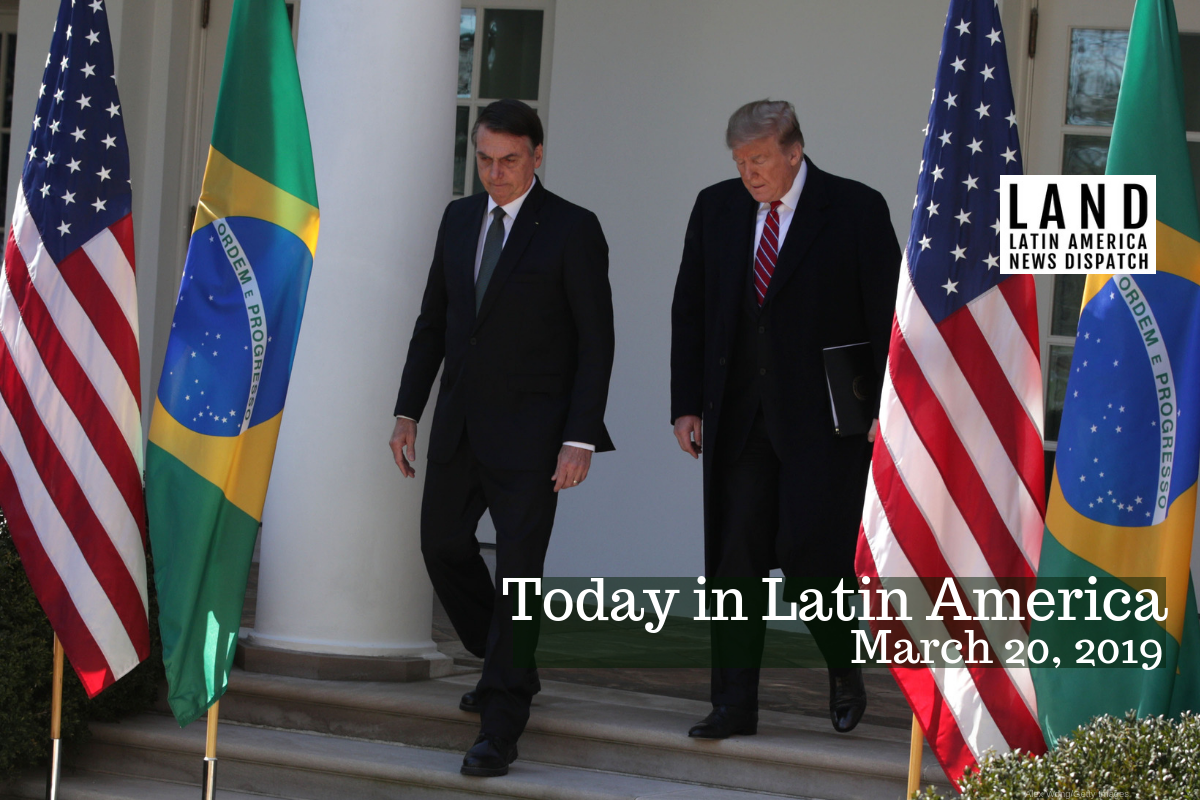 UNITED STATES: U.S. President Donald Trump and Brazilian President Jair Bolsonaro swapped praise and soccer jerseys at a White House meeting yesterday. The two men have often been compared for their politics and their campaigns, which drew support from former Trump advisor Steve Bannon. The day before yesterday’s meeting, Bolsonaro told Fox News he supports Trump’s approach to immigration. From the White House, the Brazilian president said the two leaders shared a mission to uphold “traditional family lifestyles” and combat “fake news.” Trump said he was “proud” to hear that second remark and “honored” that the two campaigns were likened to one another.

In visiting the White House, Bolsonaro hoped to strengthen trade, investments and military collaboration with the United States. Trump said he would consider bringing Brazil into the North American Trade Organization (NATO) and had pledged his support of its entry into the Organization for Economic Cooperation and Development (OECD). For now, Trump agreed to declare the country a “major non-NATO ally.” Before the meeting, the two presidents signed a handful of agreements, including changes to travel visas and the use of a satellite launch base.

MEXICO: A volcano about 60 miles southeast of Mexico City exploded on Monday, dropping ash and shaking doors and windows in nearby towns. The National Center for Disaster Prevention (CENEPRED) and the state’s Civil Protection announced the warnings remain in “Yellow Phase 2” and asked people to keep a safe distance of 12 kilometers (7 miles). Through news media, authorities chastised three climbers who broke that rule on March 12, recording a video at the volcano’s mouth. CENEPRED has monitored Popocatepetl’s activity 24 hours a day for the last 25 years. The organization says the volcano has been particularly active since December.

MEXICO: President Andrés Manuel López Obrador (AMLO) has pledged in writing to forego a re-election campaign in 2024. The announcement comes in response to Congress members’ fears that he is attempting to extend his own term through recent legislation. Lawmakers allied with AMLO have moved forward on a proposal to create a mid-term presidential referendum. But allies feared the law would give the leader a way around the constitutional ban on re-election. AMLO promised he believes “in ideals and convictions, not ambition to power.”

PUERTO RICO: In response to an increase in opioid deaths on the island, Puerto Rico’s health department yesterday approved the sale of naloxone, a drug that combats opioid overdose, without a prescription. Though the opioid crisis is not as dire in Puerto Rico as it is in several U.S. states, the problem is intensifying. In 2017, more than 600 people experienced fentanyl-related overdoses and 60 people died, according to Puerto Rican government statistics. The year before, about 400 people overdosed on fentanyl, and eight died. Puerto Rico joins most U.S. states in selling naloxone without a prescription.

COSTA RICA: A well-known indigenous land activist was shot to death in Costa Rica, authorities said yesterday. Sergio Rojas was killed Monday night in his home in the indigenous territory of Salitre, which is about 125 miles south of San José. Rojas’ death came days after he requested more police protection. Rojas spent his life defending the land of the Bribri indigenous people. The Inter-American Court of Human Rights ordered the Costa Rican government in 2015 to protect the Bribri people and another indigenous group, the Teribe, due to attempts to take over their land.

NICARAGUA: The Organization of American States (OAS) will participate in negotiations between the government of President Daniel Ortega and the opposition Civil Alliance in exchange for the release of “political prisoners” in the country, according to a letter sent by OAS Secretary-General Luis Almagro. Talks between the two sides resumed yesterday after the opposition briefly suspended them over the arrest of more than 100 protesters over the weekend. The Civil Alliance has also called for the release of political prisoners in order for peace talks to continue.

VENEZUELA/UNITED STATES: Diplomats from the United States and Russia walked away from yesterday’s talks about Venezuela with “a better understanding of the other’s views,” according to special envoy Elliot Abrams. The two parties did not, however, come to agreement over who should be president of the South American country. Russia considers Maduro’s presidency legitimate, while the United States backs opposition leader Juan Guaidó. Another U.S. diplomat argued yesterday that Guaidó should appoint Venezuela’s representative to the U.N. Conference on Disarmament before it is that country’s turn to lead the group in two months. In a separate press conference, Trump suggested that the United States may ramp up sanctions on Venezuela in the future, calling existing sanctions “not the toughest” but “right down the middle.” Critics say much of the burden of these measures is falling on the Venezuelan people.

COLOMBIA: Protesters in Colombia and other countries demonstrated against President Iván Duque’s moves to change aspects of the government’s peace deal with the Revolutionary Armed Forces of Colombia. Duque recently asked Congress to change six out of 159 provisions of a 2017 law creating a tribunal called the Special Jurisdiction for Peace (JEP). Duque has argued that these articles were too forgiving of FARC leaders accused of war crimes. His critics worry the move could hinder the peace process and conceal government misdeeds during the conflict. One analyst called the proposal simply “smoke and mirrors because it’s unlikely to be approved” in Congress.

ARGENTINA: Former President Cristina Fernández de Kirchner received two new corruption charged in two days. The first of these, announced Monday, involved the overpricing of liquefied natural gas imports; yesterday’s indictment involved train and bus subsidies. Although a judge has requested she enter custody before her first trial in May, with a $25 million bail, Kirchner has “partial parliamentary immunity” and is currently accompanying her daughter for medical treatment in Cuba. Kirchner and her two children have been accused of money laundering. Still, the politician is polling as the closest contender against President Mauricio Macri for October’s election.

BRAZIL: Police said yesterday they arrested a teenager for involvement in a shooting at a public high school. Like the other two attackers, who died, the 17-year-old suspect formerly attended the school. The shooting has heightened the debate over gun control in Brazil, after President Jair Bolsonaro eased restrictions in January.

BRAZIL: Prosecutors have accused a former army leader of “killings, torture and hiding bodies” during Brazil’s military dictatorship. They say Sebastião Curio led killings of leftists guerillas in Brejo Grande de Araguaia in 1974. Prosecutors have already tried to bring earlier charges against him, but those were suspended by courts. Curio denies the allegations.