The official TipsyCake Facebook page offered this statement from Owner Naomi Levine. This was posted today around 3:15 EST. 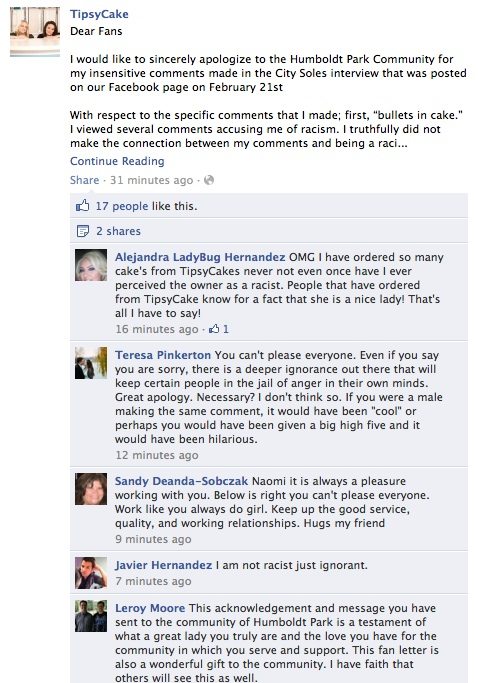 With respect to the specific comments that I made; first, “bullets in cake.” I viewed several comments accusing me of racism. I truthfully did not make the connection between my comments and being a racist, so I thought it best to immediately respond to such comments with how my business is minority owned and employs men and women from all ethnic backgrounds. I feel that the best comment to describe my ignorance came from Mr. Xavier Luis Burgos’ article on gozamos.com. In that article, Xavier wrote that:

“Some disregarded this “slip of the lip” as misguided, ironically tasteless, or even unintentional. But for many, this is impossible if one is mindful of the greater historical, social, and economic paradigms that informs such comments. Levine, like anyone on this Earth, exists not in a vacuum. “

At the time I made my comments, I truly failed to take into consideration any historical, social, economic or political implications of my words. As an Australian immigrant that settled in Humboldt Park in 2006, I now realize that I spent all my time focusing solely on growing my business and my family, and, like many in society, I never took any time to develop a real understanding of the very community and the history of the people that I have had the fortune of living among for the past 6 years. In other words, I in fact lived “in a vacuum.”

Second, my comment about “Humboldt crack.” I do apologize for this comment. However, I also feel that the people I offended with this comment deserve an explanation as to why I originally thought it would be taken as humorous and not offensive. As the owner of a bakery, I am privy to a lot of slang from customers. Nearly everyday since I opened the doors to my bakery, at least one customer would sample a product and tell me how it was “like crack.” Moreover, I noticed that men, women and children of all ages and ethnic backgrounds made this comment. This equated to 6 years of people telling me that my products were “like crack.” My only thought over all of these years, and during my comments in the interview, was that people could use that slang as a compliment to say that my food was addicting and that it was okay for me to do so as well. With respect to inserting the word “Humboldt” in front, I would have to apologize and accept 100% blame. What I thought was a “cool” play on words never crossed my mind as having implications to the presence of illegal drugs in Humboldt Park.

Finally, where I hope this message and my apology is received by all of those that were offended from my comments, I also hope it is received and acknowledged by the few callers that have made threats of violence. While I do not expect that every single person that was offended will accept my apology, I would like everyone to know that your comments on social media were received and educated me as to the mistakes I have made, which guided me to issue this apology.