What is even stranger is that the picture was posted on Twitter by @williamrodrig38, who reportedly posted the picture in a reply to Zaida "Cucusa" Hernández, a former president of the Puerto Rican House of Representatives and a pro-statehood member of the New Progressive Party (PNP). Now the tweet is causing an uproar. The PNP is the PPD's main opposition party, and an election for both Resident Commissioner and Governor is scheduled for November 6.

And everyone thinks that Hernández was the original poster of the picture. Guess they don't know Twitter. Right now, there is no Twitter proof that Hernández's Twitter account posted the original photo, but it appears that the picture was SENT to Hernández as a tweet with an @ in the tweet. So, yeah, she was spammed (and btw, we tweeted @williamrodrig38 for comment, but he hasn't replied to us yet). 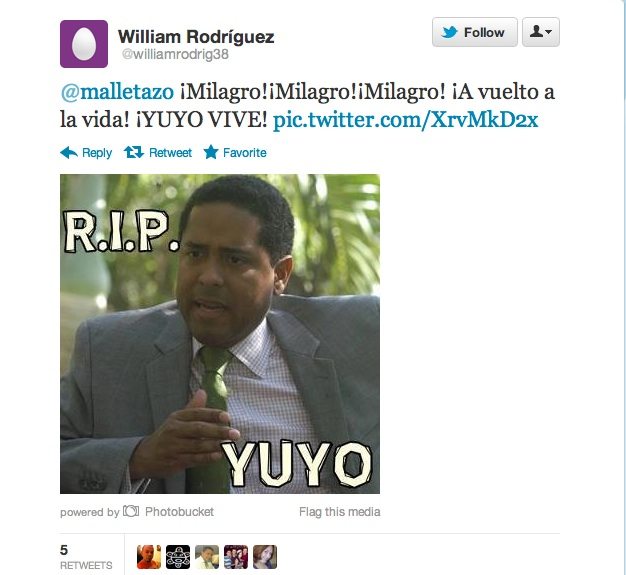 Here is a translation from the original END story:

Hernández, who now serves as a principal advisor to the Speaker of the House, Jennifer González, and hosts a radio program which defends the policies of the New Progressive Party (PNP), has tried to move away from the controversy and claimed that she does not who uploaded the picture on her profile. However, and despite the allegation that her account was "hacked", she apologized to Cox Alomar.

"I started Twitter a week ago. I do not know what the photo is about and have not seen it. I would not promote such grossness. I argue my issues upfront and forcefully, " she said. "The fact is that that someone used my account and that is enough to tell Mr. Cox that I regret it and I assure him, on my honor, that it is not my responsibility. Moving forward, I will not use social networks any more," she said, referring to her elimination of her Twitter account.

While acknowledging the Hernandez's apology, Cox Alomar reaffirmed that the alleged action of the former legislator is the kind of "petty politics" that discourages people.

In the meantime, Hernández went on her radio show today to defend her position and clarify her statements.

2 responses to “Racial Politics Gets Ugly in Puerto Rico”