Damn, Why Does This Have to Be For a Doritos Commercial in the UK?

This was ALMOST there. ALMOST there. Here is the scoop, from our dear friend Laura of Mi blog es tu blog: PepsiCo launched a new "Add a Little Mexican" campaign for Doritos in the UK. 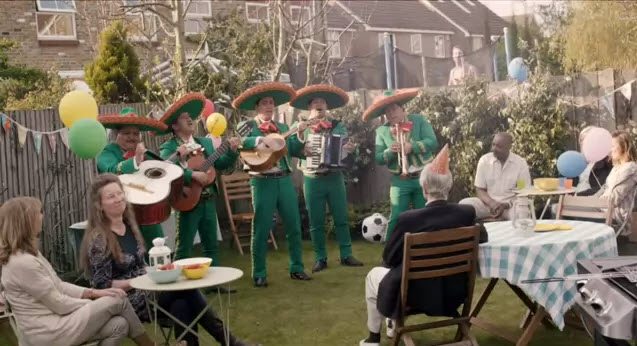 Step 1: Hire a mariachi band. Because you know how much all Mexicans wear really loud getup and go AYY AYY AYY.  Where have we seen that before? Is there no more creative person in the world who wants to go beyond the "Mexican as mariachi" idea? Really?

Step 2: Speak in funny accents. Well, funny to people in the UK, whom, last time we checked, are hard to understand as well.

Step 3: Sing and have fun. Because nothing says Doritos that a bunch of mariachis singing…. Duran Duran? Umm, wait. Wait a minute? That is actually kind of clever.

Here is the thing: we actually thought that Step 3, the singing part (come on, Human League being sung by a a mariachi band!!!) was kind of funny. We actually liked the twisting of cultures and the merging of one culture with another. Call us crazy, but we kind of like it when risks are taken with a little wit.

However, the overall commercial still takes it a bit too far. Did it have to be so "MEXICAN?" Do you have to wear such loud clothes? You know? And this is Doritos, all your Brits. Doritos. You can do so much better, but hey, Her name is Río and she dances on the sand…

We give this one a little #NoMames. Now if they sang La Cucaracha, then it would have really sucked. Right now, it only slightly sucks.

One response to “Damn, Why Does This Have to Be For a Doritos Commercial in the UK?”