The UFW–Budweiser Sponsorship: How It Reflects The Complexities of Latino Identity in the Digital Age

Since neither the UFW nor Anheuser-Busch will go on record after countless calls and emails by to comment about why the Budweiser logo appeared under the organization's iconic image, others are weighing in. There will be those who are still asking for answers and those who will defend the actions of the UFW because they are the UFW. We see this issue as a bit in between. There is economic reality, but there is also principle, and since the UFW doesn't want to address the issue, people will have questions. 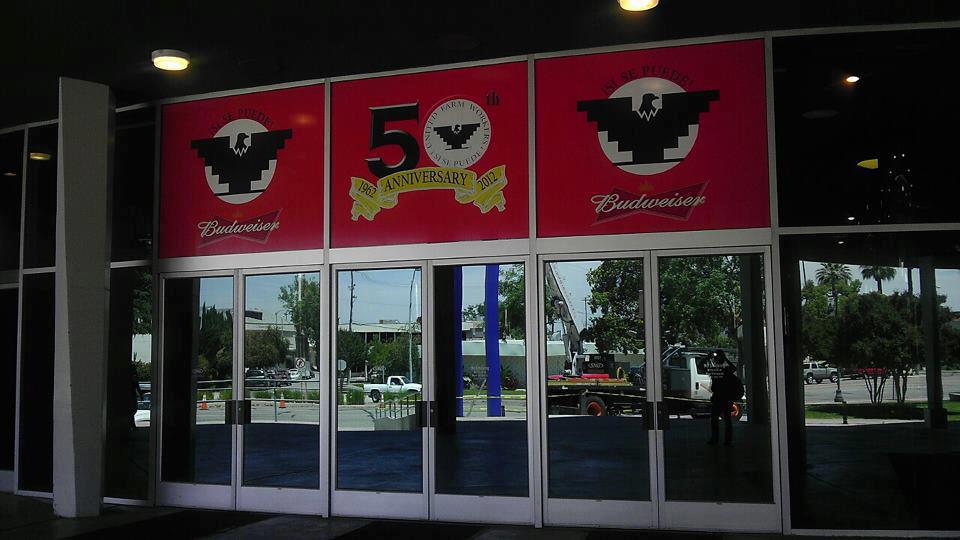 Here is a clip from Lalo Alcaraz, who argues that Latinos should stop complaining and be the ones contributing to the good causes of the UFW. We agree 100%. People should contribute, but at the same time, it was still the UFW that agreed to a Budweiser logo under an iconic image that means a lot to many people. Now, through other sources, we are being told that a local Budweiser distributor has had a strong relationship with the UFW for the past 30 years. Ok, but that is not the issue here. It is a very simple question: Why did the Budweiser logo appear under the UFW's logo during its 50th anniversary?  What is the message that the UFW wanted to convey with that sponsorship? Is La Causa now being sponsored by a beer company? Is this the sign of a union that is dwindling in influence? And why won't the UFW actually answer those questions now?

If, as Lalo argues, Latinos are ready to contribute, then wouldn't you think that that UFW should tap into the world of armchair activists (whatever that means) and do a better job on social media just asking for contributions? If the UFW just said, "Hey, we really need help here and we are going to the community to help instead of relying on a beer company to help us," we actually think that people would have responded. Kickstarter for member meals and transportation? Help a UFW member campaign?

Hell, one online Latino sitcom just raised 50,000 bucks through social media in 50 days because they worked it. They actively sought out help, and understood that social media is all about helping each other. In a world of online noise, posts, tweets, and other things, organizations need to know that a web ad asking for money or a post on a Facebook wall doesn't get you anything. Just because you have had a history of amazing accomplishments, resting on laurels in the online world will get you nothing. You have to work it, now, more than ever and it takes consistency, dedication, and effort.

Social media is a two-way street. Your past reputation, as sterling and as noble as it is, will only get you so much online. To think that people will act just because of your past is a mistake. People online don't act until you literally ask them, tweet them Facebook them, email them several times. Unless you are actually organizing online actively and letting people know that you need help, and using social media to spread that need, you won't get anywhere. People don't come to you anymore, you have to come to them, more than ever.

So if the UFW needs help, then actively connect with the social networks that can help them. Sounds simple to us. Yes, we agree with Lalo that Latinos should be contributing to the UFW, but why can't the UFW speak for itself? Why don't they just ask? And why don't they just answer some very simple questions? Sorry if this page and other pages are questioning the UFW (just answers to some very simple questions will do a lot to get more clarification), but last time we checked, thinking independently is actually a good thing for dialogue. 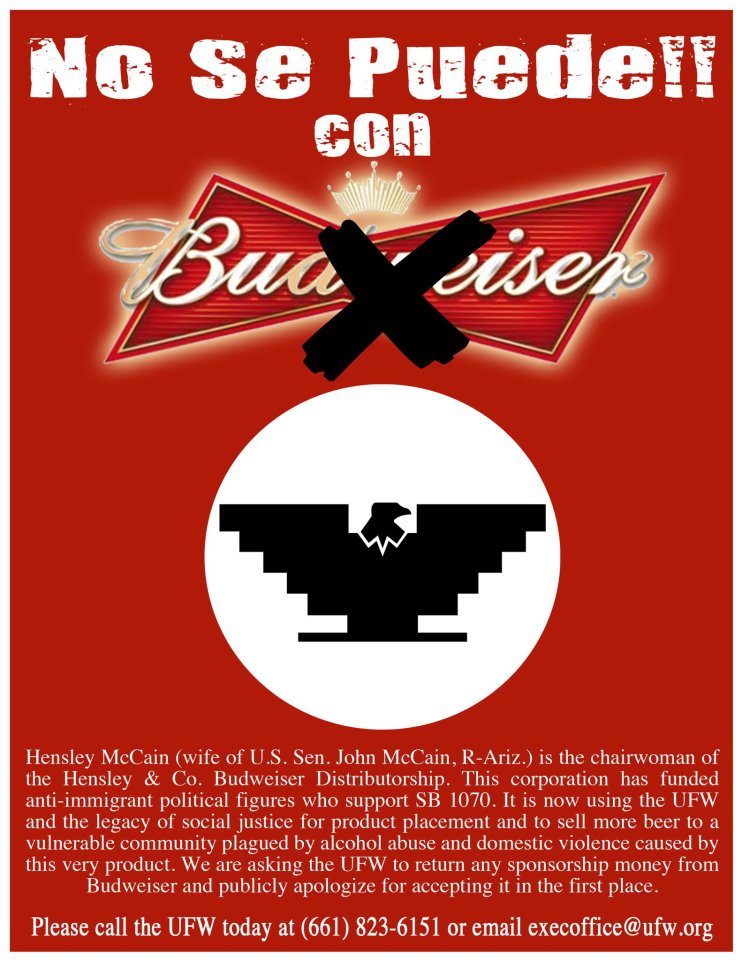 Immigration reform is a lofty goal for many organizations, but the Budweiser sponsorship of the 50th anniversary convention could be problematic for the UFW. Last year, Puente, a Phoenix based human rights group boycotted Vicente Fernandez for his concerts – sponsored by Budweiser. Hensley and Company, owned by Cindy Hensley McCain who is the wife of Republican Senator John McCain, is a distributor for Budweiser. John McCain has supported Arizona’s controversial immigration law, SB1070.

Last year when Puente called for the boycott of the Vicente Fernandez concerts, Anheuser-Busch (Budweiser) shot back a letter detailing the extent of the company’s support in the Latino community going back some 100 years. The company also said that it has not made contributions to state candidates in Arizona and that it was not involved in the legislation that concerned Puente (SB 1070).

But perceptions matter, especially when the Somos America Coalition and other groups in Arizona have tried to avoid Budweiser because of the company’s ties to the McCains in the aftermath of SB 1070.  If there is one thing that the UFW is known for, it’s the organization’s historical grape boycotts. Why can’t the UFW leadership consider the boycott efforts of grassroots activists in the state that has become ground zero for immigration?

And finally, there’s the issue of messaging. What kind of message does having the Budweiser logo at the bottom of the UFW symbolic eagle send to the masses? Does it convey a sense of seriousness of the union’s purpose or suggest that the work of the union is about good times? A recent piece in The Nation observes that the UFW only has about 5,000 members and that they don’t work in conditions that are much better than the existing low standards in California fields.  With dwindling influence and legislative defeats at the hand of a governor who is supposed to be an ally, perhaps its time for the UFW to rethink it’s goals and ties to the larger community it purports to represent while taking stock of its corporate sponsors and those who are enriched by them.

2 responses to “The UFW–Budweiser Sponsorship: How It Reflects The Complexities of Latino Identity in the Digital Age”