Tonight at Obama for America’s campaign office in Denver, two DREAMers who are supporting a walk across the country to raise awareness for undocumented youth, immigration reform, and the DREAM Act, staged a sit-in that attracted social media attention and led to four Denver police officers visiting the office. No arrests were made, and as of this initial post, the two DREAMers —Javier Hernández and Verónica Gómez— are still continuing their sit-in. Here are two tweets from Campaign for an American Dream 2012:

No arrest at this time. Could be an all-night sit-in!

Obama's campaign office has locked the doors and Javier, Vero, Raymi, and 3 protester are locked inside

Doors opened but we are not leaving. Sleeping bags coming in!

While other DREAMers waited outside, Hernández and Gómez entered the campaign office to deliver a 100-page petition with more than 2,000 signatures asking that President Obama sign an executive order to stop the deportations of undocumented youth. 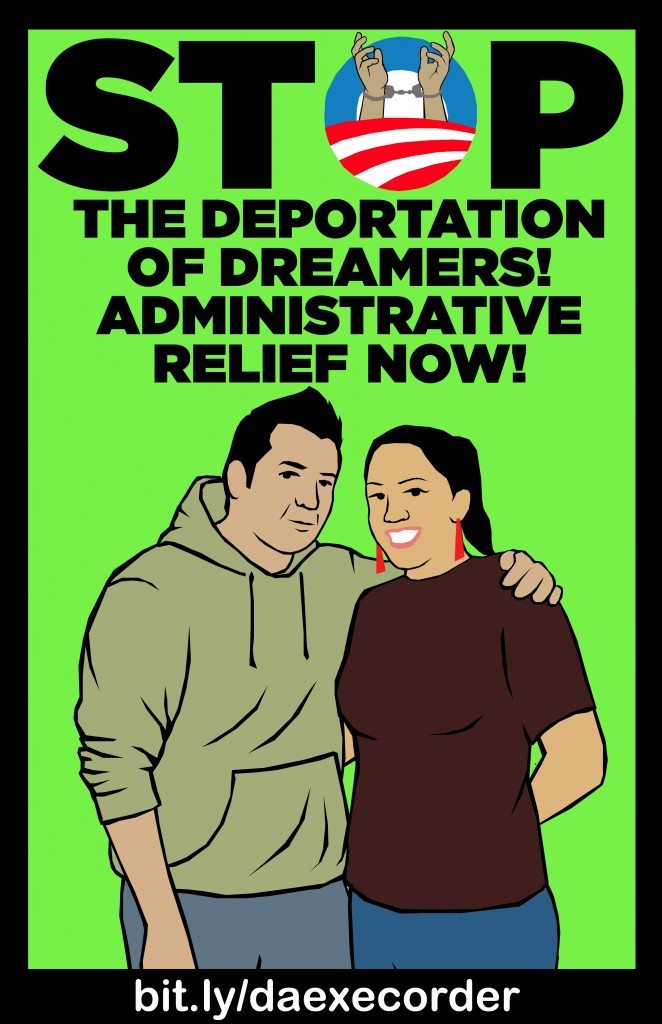 After Hernández and Gómez handed the petition over, they sat down in the middle of the office, determined not to leave. According to both of them and from what they told us on a phone call we had with each of them while they were in the Denver office earlier this evening, they felt that Obama 2012 members had ignored them, even to the point where laughs and giggles were heard as the two DREAMers brought up the subject of the President’s deportation policies. In addition, Hernández told us that members of the Obama 2012 team had put up posters on the office’s doors and windows, so that, according to Hernández, the protesters who were in front of the office could not make out everything that was going on inside. Volunteers at the Denver campaign office were conducting two phone banks tonight.

“We’ve been very disrespected the whole time we have been here,” Hernández said via phone from the Denver office. “No one has talked to us or has said anything. Our message today is clear: we are asking President Obama to sign an executive order to stop the deportations of undocumented youth. President Obama has failed to act and he has left the Latino community behind.”

In a separate phone interview, Gómez corroborated what Hernández had said to us, but as we were about to ask her for more information, she had to end our conversation because police had arrived and she was anticipating arrest. Members of the Campaign for an American Dream, who have been in communication with Hernández and Gómez all night, confirmed that police did show up to the Denver office but that no arrests were made.

We did reach out to the Obama campaign for information about the sit-in. This is what they said:

“The President believes that Congress should pass the DREAM Act which would allow responsible young immigrants who came here as children and were raised as Americans to earn a path to citizenship by going to college or serving in the military and stands ready to work with Republicans to find common ground,” said Michael Amodeo, Obama for America’s Colorado Communications Director.

“Governor Romney is the most extreme presidential candidate on immigration we’ve seen,” Amodeo continued. “He has promised to veto the DREAM Act and believes all undocumented immigrants should self-deport. Only the Latino vote will send Republicans the clear message that they must stop playing politics with immigration and join the President to advance sensible immigration proposals such as the DREAM Act.”