Even Though It Struck Down Most of SB 1070, SCOTUS Upholds the “Check Your Papers” Provision

This just in from the Supreme Court regarding Arizona's SB 1070 laws and AZ Central provides a very good summary of today's opinion: 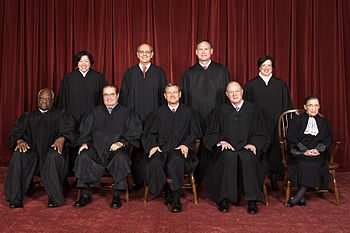 The Supreme Court has ruled that one key part of the Arizona immigration law known as Senate Bill 1070 is constitutional, paving the way for it to go into effect. The court ruled that the other three parts are unconstitutional.

The court, in a 5-3 decision written by Justice Anthony Kennedy, upheld the portion of the law that requires an officer to make a reasonable attempt to determine the immigration status of a person stopped, detained or arrested if there's reasonable suspicion that person is in the country illegally.

Kennedy wrote that it was improper for the lower courts to halt the portion requiring police to check immigration status "without some showing that (the section's) enforcement in fact conflicts with federal immigration law and its objectives."

"The mandatory nature of status checks does not interfere with the federal immigration scheme."

Even though the "papers please" provision was upheld, the opinion from SCOTUS suggests that if the provision is broadly applied, it would get struck down too. From the opinion (which is below):

‎As a general rule, it is not a crime for a removable alien to remain in the United States. The federal scheme instructs when it is appropriate to arrest an alien during the removal process.

In the end, even though all the other provision were struck down, this one provision was the crux of SB1070. What SCOTUS did strike down was as follows:

Justices struck down a part of the law that would have tightened punishments for working illegally in the state and made non-compliance to federal immigration registration laws a state misdemeanor.

Finally, POLITICO released a plain English summary of all this. Good for them.

The Supreme Court on Monday struck down several parts of the Arizona anti-illegal immigration law but rejected a challenge to the law's most controversial provision. That measure, requiring police to conduct immigration checks on individuals they arrest or merely stop for questioning whom they suspect are in the U.S. illegally, does not appear to violate the Constitution by intruding on the federal government's powers to control immigration, the court said. However, the justices said further legal challenges to the provision can go forward after that part of the law takes effect.

Here is the complete opinion. Once we have more, we will share.

6 responses to “Even Though It Struck Down Most of SB 1070, SCOTUS Upholds the “Check Your Papers” Provision”