While the Haters Hate, US Medalist Leo Manzano Becomes a New American Hero

Let's forget for just a few moments the smugness and self-promotional arrogance of CNN contributor Ruben Navarrette, Jr., who continues to provide his own congratulatory play-by-play updates on his public Facebook site about a column that in the end called into question the patriotism and accomplishments of American medalist Leo Manzano. We have already responded to Navarrette's piece and his initial reaction was so immature and unprofessional, we will just let his own social media actions speak to his true intentions as to why he wrote this piece in the first place. 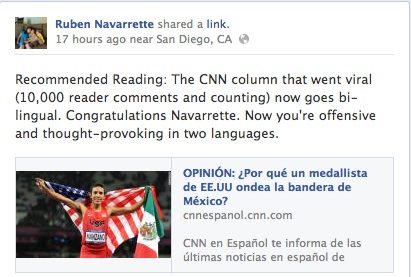 Let's also forget that in the end, Navarrette's irresponsible column is just another example of how some Latinos in the media will place profit over respect and decency. Instead of congratulating the successes of a talented Latino individual (with an even more amazing story) and trying to learn more about what drove him to succeed, you get suggestions of Latinos (and more specifically, Mexicans!) not being patriotic, and all hell breaks loose. Maybe Navarrette should have read up on his Fox News Latino this weekend, where María Burns Ortiz wrote a piece praising Manzano and writing that Navarrette was "corrupting Manzano's moment."

Burns Ortiz is right. Navarrette did corrupt the moment and his CNN.com column was nasty and patronizing. It ended with a lecture of how Manzano failed in his duties as an American and basically let down his parents. As Navarrette writes directly to Manzano:  "It wasn't unlike the choice your parents made when they chose the United States over Mexico a quarter century ago. They voted with their feet. It would be nice if you haven't left your heart behind. This country took you in during your hour of need. Now in your moment of glory, which country deserves your respect — the one that offered nothing to your parents and forced them to leave or the one that took you all in and gave you the opportunity to live out your dreams?"

The corruption that Burns Ortiz so aptly labels in describing Navarrette's column has created the justification of a wider audience getting all riled up in their Uncle Sam undies because an American athlete had the audacity to display a (gasp!) Mexican flag next to a US flag as a way to celebrate his heritage and his roots.

It has led to some comments that congratulated Navarrette for his "courage," but also to many more comments that spoke to the evils of letting those damn Mexicans into this country in the first place. The conversation has turned from a question about flags to one that asks why the US government can't keep the "illegals" away because Manzano was undocumented when he was 4 before he became a US citizen as a teenager. Deny them amnesty and this wouldn't be a problem! And now we have a Mexican American CNN writer who is with us! USA! USA! USA!

Haters will always hate, but in the end, the attention that Navarrette is spinning like a desperate Barnum to prove to CNN (and now Facebook, it appears) that he is a relevant voice of Latino USA is based on all that is wrong about this country. Navarrette takes pride in his ability to write to incite and disrespect his readership. As he says in his quote on his official Facebook Page (different from his public profile): "I didn't mean to make you angry. I only meant to make you think. It was having to think that made you angry." It is pretty clear to us, that no matter how you want to look at a story, Navarrette will be ready to rile up the anger in you and at the expense of Mexican Americans in this country. We predict eventually—once this story dies down—Navarrette will do something to piss off the very same nativist readers that now praise him, because that is the game he plays in the digital world. It's all about the traffic and clicks. Just get those 10,000 comments, baby.

And to that, we say to Navarrette: a foundation that is based on the pride of making people angry will eventually crumble. Dividing never unites, and when someone gets giddy about creating division at the expense of others, it is just wrong.

We prefer humility, honor, and respect. And that is why we will say it without hesitation: Leo Manzano is a new American hero.

But don't take our word for it, take it from Jim Ryun, the last US distance runner to ever medal in the Olympics' 1,500 meter race. 44 years ago. In 1968. In Mexico City. Ryun is a running legend, and right after Manzano won his silver, this is what Ryun tweeted, and look how Manzano responded two days later: 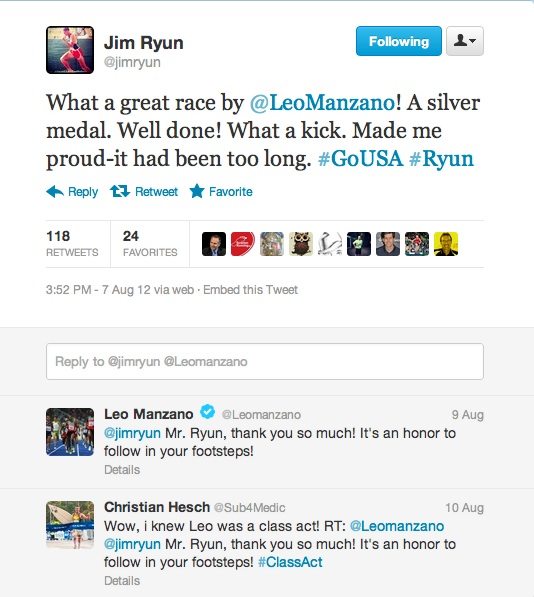 Mr. Ryun, thank you so much! It’s a honor to follow in your footsteps! There it was, available on Twitter for anyone to see.

A public display of love, respect, and admiration. An American Olympic legend telling the new young American medal winner that he was proud. And in return, the young American medal winner starts a tweet by saying Mr. In that one little exchange, Manzano's true essence came through: always be proud of what you have accomplished, but never forget the others that came before you. By the way, @Sub4Medic, we also knew that Leo was a class act!

And now can you understand why Manzano might have ran with a Mexican flag at the same time he held an American one? Can you actually see why this young and very humble man might have done what he did? Like Burns Ortiz wrote:

Olympic history is littered with examples of sports mercenaries, athletes who seek a change of citizenship in an effort to compete for a country whose Olympic team is easier to make. Manzano is not one of them. Considering that Mexico did not even field an athlete in the 1500m, Manzano would have been a shoo-in to qualify for the Mexican Olympic team.

But for Manzano, who is American and has always considered himself to be, taking the easy route wouldn’t have made sense. It wouldn’t have felt right. It is possible to love more than one country. It is possible to represent more than one people. The United States is built upon a nation of immigrants, and continues to evolve as a nation of immigrants. Leo Manzano understands this concept. Hopefully, someday soon, more people will understand it as well.

So, yes, this is the person who is in essence is being called a traitor. This is the person being told to go back to Mexico, the one who has felt anger from a small number of narrow-minded Americans—led by its Mexican American pied piper—who just will not accept that what Manzano did was proper in their eyes. So now he should hand in his medal and move back to Mexico. Because he dishonored America.

Yes, this is the person who said the following right after he won a silver medal for the USA, as to how he felt to become the first American to get the 1,500-meter podium since 1968:

“I feel proud and honored to be the person who could get the United States here once again."

Yes, the person who also said this when he was asked about what this race meant to him and what it can mean to other younger kids who have had a similar immigrant experience as Manzano's as well as Latino kids in general:

“I want others to look at the road I’ve traveled to get here and see how a little guy like me could grab this triumph, and that it inspires them to fight."

Yes, the person who was overcome with pride and joy after he had medaled:

“When I crossed the finish line I was carried away by emotion, because I’ve had to overcome such a lot of obstacles and heartbreak to reach this moment. I felt so many things all at once and it was like a tremendous weight had been lifted from my shoulders.”

Yes, the person expressed his pride for being an American:

“The United States is my home and I’m very proud to represent it. I love this country and wouldn’t change it for anything…"

But because of what he said after, the haters are coming to get him:

"…but my roots are Mexican and I also feel proud to be able to carry the two flags."

So forget about what Manzano's accomplishments meant to the US sport of distance running, forget about Manzano's desire to show others that your dreams can become reality through hard work and overcoming obstacles, forget that Manzano showed an honest pride for the country that gave him opportunities, because in the end had the gall to remember his heritage and celebrate where he came from, he is now un-American.

You know what we say to that?

Here's hoping that this country becomes more like Leo Manzano and a lot less like Ruben Navarrette, Jr. 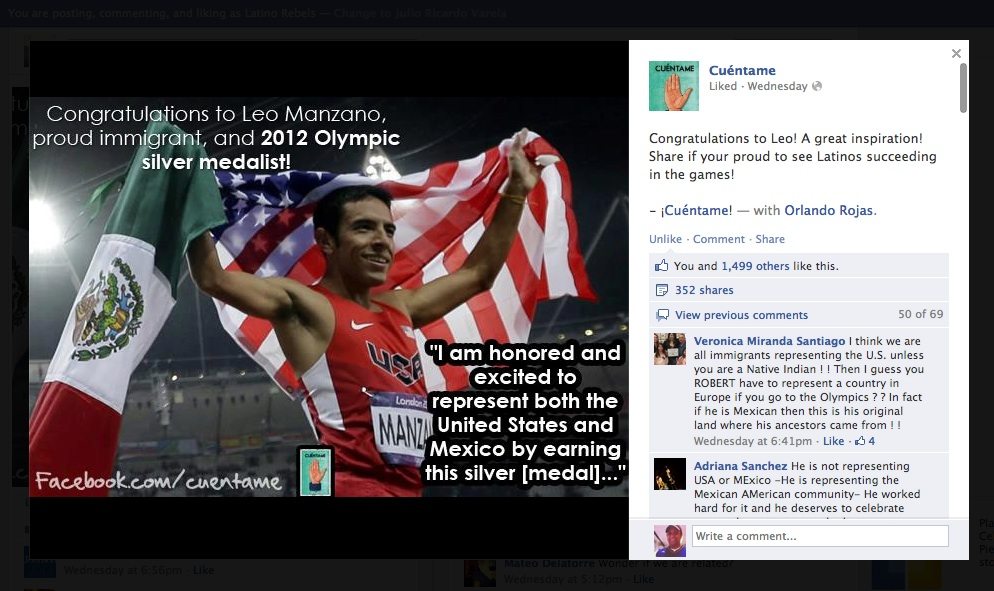 6 responses to “While the Haters Hate, US Medalist Leo Manzano Becomes a New American Hero”