We know that The Daily Bleach is a satire site. Think of it like a dumb person's The Onion. The Bleach is known for skewering anyone. However, unlike The Onion—whose brand clearly screams satire and comedy—the Bleach is on a slippery slope and is unethical. It does very little to clearly disclose that all that it writes is fake. So when people visit it for the first time, they think the content is real. As a result, the Bleach scrapes the bottom of the Internet barrel to secure web traffic and major advertisers, like 1-800-Contacts.

So, when the following "opinion piece" called "Loud, Crime-Infested and Endlessly Sassy: Is Puerto Rico Truly Ready to Become America’s 51st State?" was published this week, you can imagine the reaction. So far, the piece has gotten over 17,000 Facebook likes and over 1,700 comments. Quite frankly, it is satire done in the poorest of tastes, since it plays into the ignorance that many Americans have about Puerto Rico. Puerto Ricans are welfare whores, Puerto Ricans are criminals, Puerto Ricans are loud, Puerto Ricans live of the federal teat, etc. etc.

The slippery slope gets even more slippery when the supposed satire piece actually uses real valid links to make its point. For example, the Bleach piece links to places like StopPueroRicoStatehood.org, which proudly states the following:

Currently there is very much poverty in the Commonwealth of Puerto Rico. If it becomes a state, they will no longer be exempt from Federal income tax and even more people will be forced on to the public dole because of the effects of increased taxation on a struggling economy. It would lead to increased burden on the US Taxpayers to provide additional welfare payments to Puerto Ricans.

So, is this piece satire or is a piece that uses really bad satire to connect to real pages? Is it justfying a blatant ignorant and inaccurate view of Puerto Rico that borders on racism? And does this satire really help the cause when you read the following from the post (btw, the typos are intentional because hey, when you write satire, you have to be witty!):

The Peurto Rican people are a confusing mix of black, Latino and aborigines (the Taino people). They have dark skin and are, on average, of shorter height than normal Americans. Their hair is worn in either short, kinky Afro style or straightened in long, luxuriant strands of black. They’re drawn to the bright colors of their island flag and most wear red clothing daily. “PRs,” as they like to be called, are a very hip-hop, one only need follow the loud thumping music to ferret out a group of PRs.

On a personal level, the Peurto Ricans can be quite cheerful and surprisingly talkative. Spanish is their native language, though many have a rudimentary grasp of English (particularly when it comes to words like “money,” “good times” and “back door”). If you engage a PR in conversation, it can literally take over an hour to extract yourself from their presence. Arguments are a favorite pastime. No matter what subject you’re talking about, they’re likely to get quite loud and throw up their arms while standing aggressively close. Their passionate nature can be ascribed to their Latino heritage, and their hypersexualized character comes from being a sheltered island people. Indeed, PRs often see arguments as foreplay before hardcore sexual intercourse.

The men preen for their erotic role in PR society with smooth, finely sculpted bodies and delicately soft skin. They prefer to walk the streets shirtless. The women are buxom and prone to bikini tops and tight jean shorts. Often, the girls are the aggressors pursuing males with shocking catcalls and heavy makeup. Intercourse between the two tends to involve a great deal of “dirty talk” followed by discussions of marriage (even between grunts and moans, the Peurto Ricans are world class talkers!). There is even a preponderance of homosexual male-on-male encounters among the men, in dark public bathrooms and on menacing jungle paths. These scenarios are sweaty and fast, with little affection after the fact.

That text is followed by this: 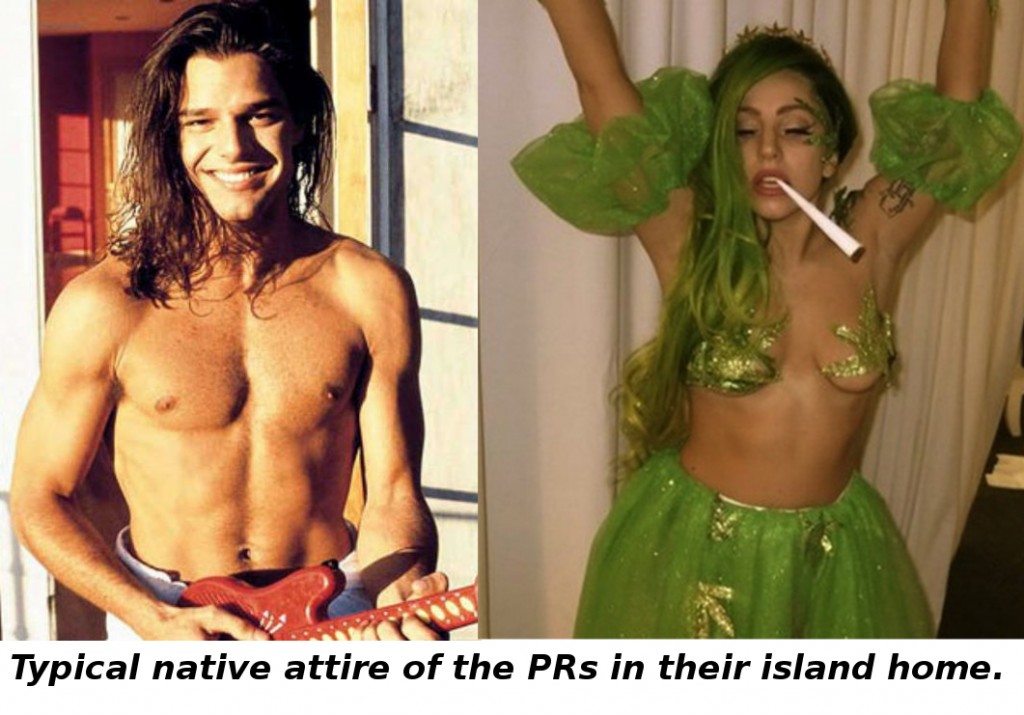 Now we were going to ignore this entire post but when we started reading some of the comments from actual people who AGREE with the fake Bleach post, we couldn't ignore it. So when we shared it with our Facebook community, we received some very insightful comments:

It's hard enough to be a latina without people reinforcing stereotypes. Not right, I didn't like it at all. To me, it really is a racist statement, whether it was meant as a joke or not. It doesn't matter. It's out there, and it reads like racism. Crime infested? That's what they choose to take from our culture? If they were truly joking, why didn't they write about how curvaceous our women are, or how romantic our men are? Why didn't they write about the beauty of our naturally curly hair, or our dancing? They wrote instead, loud, crime infested, and sassy, as if to make up for the two negatives that they wrote.

Theres nothing funny about this piece of garbage article because a lot of times we try to mask how we really feel with humor. They wanna say "relax its just satire.. Why so sensitive?" When in reality a lot of ppl in the US really do feel this way about us. Plus, we have paid a HIGH, HIGH price to be considered US citizens. Ask the ppl in vieques, and the ones still mourning family members. our culture shouldn't be reduced to weak satire.

i know we're not supposed to have an excellent grasp of ingles. but aren't satires supposed to be funny. i can take a joke. there weren't any.

So, we are guessing that the Bleach is chuckling in some little corner of the Internet at all this. You know those witty hipsters! Nevertheless, the Bleach is not going to change its way, and if this week's target is Puerto Rico, we are pretty sure someone else will get offended next week. How does this type of crap stop then? First, it needs to be exposed and discussed. Second, the bad practices of the Bleach about how they do nothing to reveal that they are a satire site speaks to the company's poor ethics. Finally, let the advertisers know. Hit these guys where it hurts. That is how you can make a difference and put an end to one part of the online world that does nothing to make this world a better place.