#ICEFail: We Need Reform, Not Raids

Even as the Department of Homeland Security announced yesterday that deferred action recipients are now considered to have a “lawful presence” in the United States, recent events in Arizona and in other parts of the country have sent a mixed message.

The homes of Arizona DREAMers continued to get raided in 2013, from Erika Andiola to Edi Arma. Additionally, ICE agents raided the wrong home of a legal resident in Oklahoma and have been sued in a classic case of “driving while brown.”

Is ICE a rogue agency? Many think so, and the department’s budget numbers confirm that “the identification and removal of ‘criminal aliens’ remains the priority. There is a shift away from the 287(g) program and the Fugitive Operations Program, and toward Secure Communities, which is expected to be mandatory and activated in all jurisdictions across the country by the end of FY2013.” 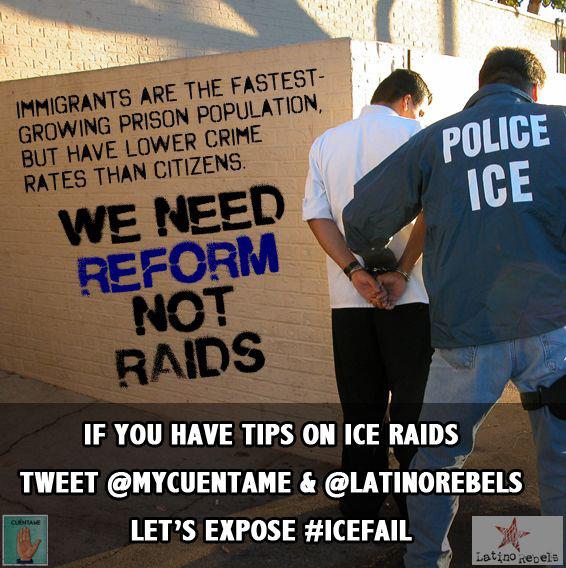 As the country begins to look at comprehensive immigration reform, the current enforcement role of ICE needs to be addressed. The homes of “low priority” individuals are still being raided, ICE continues to violate the rights of legal residents, and racial profiling is commonplace. The Obama administration pushes immigration reform in public, while ICE agents deport people at a record rate. A recent post by PolicyMic sums the issue succinctly, “Immigration Reform: Obama Talks Change, But Deported Half a Million People Last Year.”

This needs to stop.

Starting this week, Latino Rebels and Cuéntame will be using #ICEFail to share the real stories that are happening every day in America. If you want to share your story, you can tweet it to #ICEFail, @latinorebels or @mycuentame. You can also post your stories and tips to the Latino Rebels Facebook page or the Cuéntame Facebook page.

We need reform, not more raids. Staying silent is no longer an option.

One response to “#ICEFail: We Need Reform, Not Raids”