The Irish Soldiers of Mexico: A Guest Post by Michael Hogan

EDITOR’S NOTE: On this St. Patrick’s Day, we are honored here at Latino Rebels to publish the following essay by Michael Hogan, one of the world’s foremost experts about the history of the San Patricios.

One of the least-known stories of the Irish who came to America in the 1840s is that of the Irish battalion that fought on the Mexican side in the U.S.-Mexico War of 1846-1848. They came to Mexico and died, some gloriously in combat, others ignominiously on the gallows. United under a green banner, they participated in all the major battles of the war and were cited for bravery by General López de Santa Anna, the Mexican commander-in-chief and president. 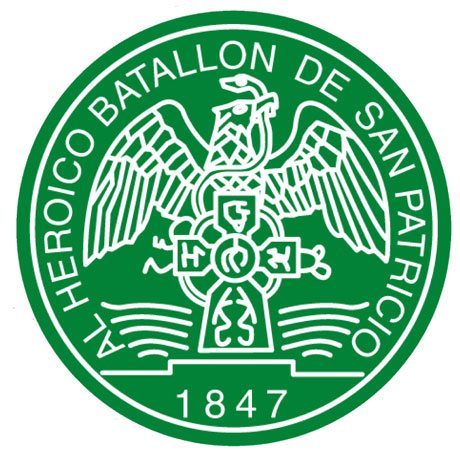 At the penultimate battle of the war, these Irishmen fought until their ammunition was exhausted and even then tore down the white flag that was raised by their Mexican comrades in arms, preferring to struggle on with bayonets until finally being overwhelmed. Despite their brave resistance, however, 85 of the Irish battalion were captured and sentenced to bizarre tortures and deaths at the hands of the Americans, resulting in what is considered even today as the “largest hanging affair in North America.” 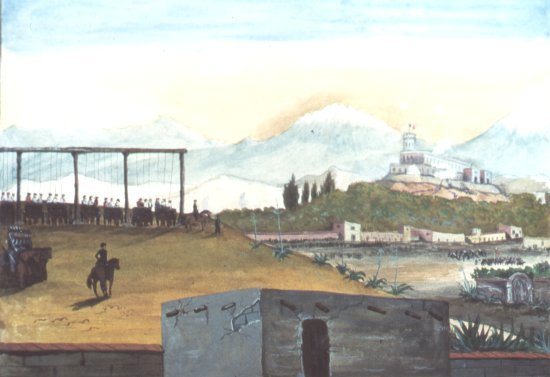 Hanging of the San Patricios. Painted by Sam Chamberlain.

In the spring of 1846, the United States was poised to invade Mexico, its neighbor to the south. The ostensible reason was to collect on past-due loans and indemnities. The real reason was to provide the United States with control of the ports of San Francisco and San Diego, the trade route through the New Mexico Territory, and the rich mineral resources of the Nevada Territory – all of which at that time belonged to the Republic of Mexico. The United States had previously offered $5 million to purchase the New Mexico Territory and $25 million for California, but Mexico had refused.

Before the declaration of war by the United States, a group of Irish Catholics headed by a crack artilleryman named John Riley deserted from the American forces and joined the Mexicans. Born in Clifden, County Galway, Riley was an expert on artillery, and it was widely believed that he had served in the British army as an officer or a non-com in Canada before enlisting in the American army. Riley’s turned this new unit into a crack artillery arm of the Mexican defense. He is credited with changing the name of the group from the Legion of Foreigners and designing their distinctive flag. Within a year, the ranks of Riley’s men would be swelled by Catholic foreign residents in Mexico City, and Irish and German Catholics who deserted once the war broke out, into a battalion known as Los San Patricios, or “Those of Saint Patrick.” 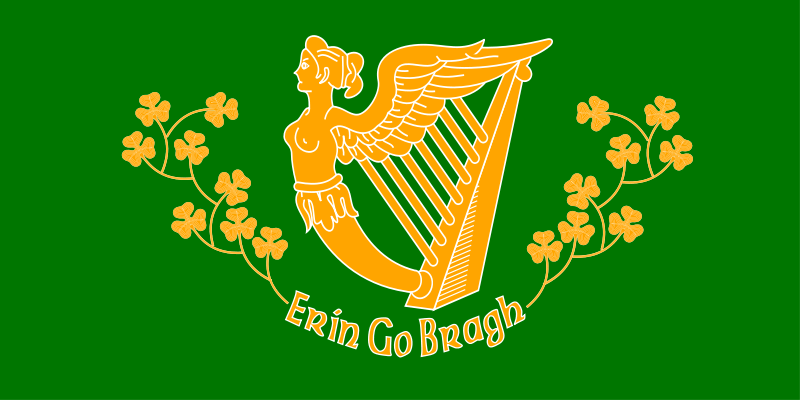 The San Patricios fought under a green silk flag emblazoned with the Mexican coat of arms, an image of St. Patrick, and the words “Erin Go Bragh.” The battalion was made up of artillery and was observed in key positions during every major battle. Their aid was critical because the Mexicans had poor cannon with a range of 400 meters less than the Americans. In addition, Mexican cannoneers were inexperienced and poorly trained. The addition of veteran gunners to the Mexican side would result in at least two major battles being fought to a draw. Several Irishmen were awarded the Cross of Honor by the Mexican government for their bravery, and many received field promotions.

At the Battle of Churubusco, holed up in a Catholic monastery and surrounded by a superior force of American cavalry, artillery, and infantry, the San Patricios withstood three major assaults and inflicted heavy losses on the Yanks. Eventually, however, a shell struck their stored gunpowder, the ammunition park blew up, and the Irishmen, after a gallant counteroffensive with bayonets, were overwhelmed by sheer numbers. They were tried by a military court-martial and then scourged, branded, and hanged in a manner so brutal that it is still remembered in Mexico today.

In September 1847, the Americans put the Irish soldiers captured at the Battle of Churubusco on trial. Forty-eight were sentenced to death by hanging. Those who had deserted before the declaration of war were sentenced to whipping at the stake, branding, and hard labor. Fueled by Manifest Destiny, the American government dictated terms to the Mexicans in the Treaty of Guadalupe Hidalgo in 1848. More than two-thirds of the Mexican Territory was taken, and out of it the United States would carve California, Nevada, New Mexico, Arizona, Utah, Wyoming, and parts of Kansas and Colorado. Among all the major wars fought by the United States, the Mexican War is the least discussed in the classroom, the least written about, and the least known by the general public. Yet, it added more to the national treasury and to the land mass of the United States than all other wars combined.

After the conflict, so much new area was opened up, so many things had been accomplished, that a mood of self-congregation and enthusiasm took root in the United States. The deserters from the war were soon forgotten as they homesteaded and labored in the gold fields of California or, as the 1860s approached, put on the gray uniform of the Confederacy or the blue of the Union. Prejudice against the Irish waned, as the country was provided with a “pressure valve” to release many of its new immigrants westward. The story of the San Patricios disappeared from history.

For most Mexicans, solidarity with the Irish is part of a long tradition and they remembered the help they received from the Irish and their friendship. In the words of John Riley, written in 1847 but equally true today, “A more hospitable and friendly people than the Mexican there exists not on the face of the earth… especially to an Irishman and a Catholic.”

Riley sums up what cannot be clearly documented in any history: the basic, gut-level affinity the Irishman had then, and still has today, for Mexico and its people. The decisions of the men who joined the San Patricios were probably not well-planned or thought out. They were impulsive and emotional, like many of Ireland’s own rebellions – including the Easter Uprising of 1916. Nevertheless, the courage of the San Patricios, their loyalty to their new cause, and their unquestioned bravery forged an indelible seal of honor on their sacrifice.

Michael Hogan is the author of 20 books, including the Irish Soldiers of Mexico, one of the major historical works on the San Patricio Battalion which encompasses six years of research in the U.S., Mexico, and Ireland. As a permanent resident of Mexico, he was the first historian to be granted complete access to Mexican archives and military records. His home page is www.drmichaelhogan.com and the Facebook page for the book and related videos, photos, maps and stories about the San Patricios can be found at www.facebook.com/IrishMex.

2 responses to “The Irish Soldiers of Mexico: A Guest Post by Michael Hogan”