Genocide on Trial, Day 8: Women Survivors of Sexual Violence, “Your Truth Is Our Truth”

NISGUA (Network in Solidarity with the People of Guatemala) filed the following Day 8 report (from April 2, 2013) of the genocide trial of former dictator Efraín Ríos Montt and ex-intelligence chief Mauricio Rodriguez Sánchez in Guatemala City. They have given us permission to republish all their reports about this historic trial.

At the close of proceedings yesterday, April 1st, day 7 of the genocide trial, the public prosecutor’s office requested the judges close the courtroom in order to hear the testimony of women who survived sexual violence at the hands of the military. Lawyers for the Association for Justice and Reconciliation (AJR) shared the pleas of one of the witnesses, “She begged, that is the word she used, that her name not be published. ‘If my family finds out I will be beaten. My family doesn’t know.'”

The judges, wishing to maintain an open and public trial, denied the request. They asked that press and media respect the women’s requests not to be identified in photos and allowed for the women to appear with their faces covered. 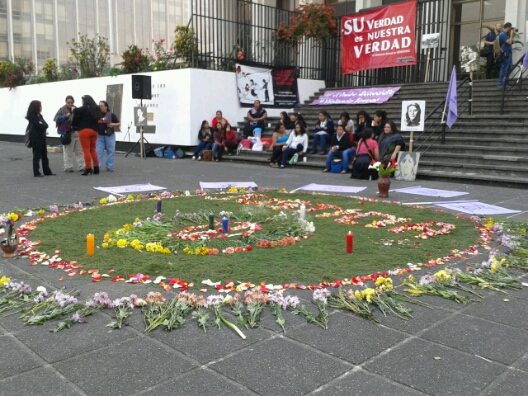 Activities took place this morning in the plaza while inside the courtroom was filled with supporters from human rights and women’s organizations. Women sat in the first rows of the gallery and covered themselves with Guatemalan weavings, in solidarity with the women survivors who would be coming in covered with traditional Maya Ixil cloths to hide their identities.

In the words of one of the morning witnesses, “I’m here, maybe we are covering our faces but I’m going to say what they did to me.”

After Pedro Pacheco Bop testified about a massacre in Chel on April 3, 1982, the women’s testimony began. One by one the women came with their faces fully covered, guided by supporters. In addition to Pacheco Bop, 12 women gave their testimony today, 10 of whom testified about the brutal sexual violence they suffered at the hands of the Guatemalan military.
[Trigger warning: the following includes descriptions of extreme sexual violence]

The women testified about their own rape and that of their mothers, daughters and neighbors, of young girls, pregnant women and elders. They gave testimony about gang rapes by soldiers and mass rapes which took place in churches. Several witnesses also shared the stories of the sexual violence they suffered as an element of torture and interrogation, taking place at military bases in Nebaj.

They raped many women. My aunt was near my house, they wanted to rape her and she said, I don’t want you to do what you’re going to do to me, I’d rather you kill me. So they killed her and her three children. 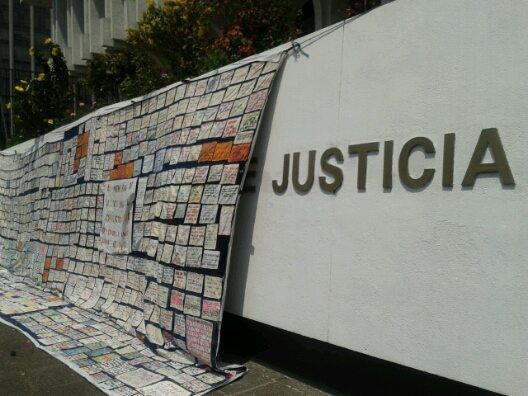 The women shared the health problems that have stemmed from the rapes and the ongoing somatic impacts of the trauma. They shared their wishes for justice.

“I only want to ask the court for justice. I don’t want my children to suffer.”
“I want justice.”
“What I’m asking for is justice.”
“I’m glad to be here testifying today, that the law is with us today. If justice is done, I thank you.”

The majority of the witnesses testifying about sexual violence were not questioned by the defense. However, defense lawyer Marco Antonio Cornejo asked several questions of the sixth woman to testify. She named a Captain Vasquéz as her rapist in her testimony, and Cornejo asked if she had filed a complaint against him.

Where am I going to file a complaint? There was no justice, where was I going to go? We were threatened by the military.

He went on to ask her, “How do you know the accused?”, to which she replied, “I know him because the soldier told me that Ríos Montt had sent the soldiers to us.”
We have excerpted the testimony of the 10th woman to bravely give her survival story below:

The soldiers trapped the people. I went with my mother, we went walking because we had nothing, our house and clothes had been burned. We didn’t have food. We walked and went little by little. We went because they had burned our things and we didn’t have food. We ate wild herbs, like Santa Catarina. I’m alive thanks to those plants

He grabbed me and stabbed me and I have the scars still. I’m here to testify because I suffered, I was raped. For 3 nights I was there, I was raped. I couldn’t move, I couldn’t walk. They hit me as if I was a ball. That’s what hurts me, they made me suffer. They covered my son’s mouth. My son had blood coming out of his nose, his mouth, his eyes. My son died. He raped me and then stabbed me and I still have the scars. Then he left me with his companeros. I recuperated. Then I had to prepare their food. I didn’t eat with them because I was scared.

That’s why I’m here to testify, I didn’t come here to lie. I haven’t done anything. This is what pains me. Maybe it will help me to come testify here, because here I am venting, I am getting it all out. I’m here to testify so that this doesn’t happen again because it pains us women. There were many soldiers, they raped me, I couldn’t move anymore. I was there for a long time with them and they went to kill a man. They asked me if the man was my compañero. He didn’t have a tongue anymore, they’d cut him. They put the man in front of me and asked if I knew them. I didn’t say anything because I didn’t know what they were saying.

We honor the voices and words of these women, who have courageously shared these testimonies, and women survivors of sexual violence throughout the world.

NISGUA has provided human rights accompaniment to the witness organization, the Association for Justice and Reconciliation, and their lawyers, the Center for Human Rights Legal Action since 2000. We will continue to bear witness to the truth and bravery of these survivors throughout this historic trial. To bear witness with us, stay tuned to our ongoing live Twitter coverage @NISGUA_Guate, like ourFacebook page and sign up for email updates.

One response to “Genocide on Trial, Day 8: Women Survivors of Sexual Violence, “Your Truth Is Our Truth””