VIDEO: Senator Jeff Sessions Says There is No ‘Scriptural Basis’ for Immigration Reform

Yesterday’s immigration reform hearings in Washington had several interesting moments. Perhaps one of the most bizarre involved Alabama senator Jeff Sessions (R) and his use of the Bible to prove that immigration reform was never supported in the Scriptures. 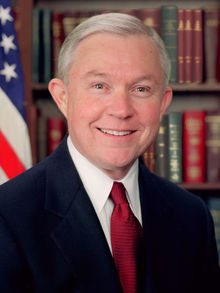 Sessions’ Bible study moment was in response to the testimony of David Fleming, a senior pastor of the Champion Forest Baptist Church in Houston. You see, Fleming supports the current immigration reform bill. And that must make Sessions feel a bit perplexed/ Before sharing Sessions’ comments below, here are a few clips to give you the context.

Apparently Sessions could not believe that a key voice of the evangelical movement was in favor of comprehensive immigration reform. So, what does Sessions do? He tries to out-pastor the pastor. Watch.

We are still amazed how Fleming’s response was gracious but it was clear to us that Fleming thought that Sessions had no idea what he was talking about.

As for a “scriptural basis,” maybe Sessions should read this actual Senate testimony from 2009, which coincidentally, was given to the Senate Judiciary Committee, of which Sessions is a member:

I, Lynne Hybels, would like to submit this testimony on behalf of myself and my husband, Bill Hybels … Even though the issues of immigration can often be viewed as a political, economic, or security issue, our perspective on immigration has been formed at the community level as local church leaders. In this capacity, we are continually confronted with immigration, not necessarily as a policy issue but as a personal issue in which we witness the human consequences of a broken immigration system every day.

Our faith informs us that we were all strangers and aliens once, separated from God. Because God was willing to include us in his redemptive plan, we “are no longer strangers and aliens, but [we] are fellow citizens” (Ephesians 2:18-19a). As Christians, we accept the biblical perspective that we are all sojourners on this earth, commanded to steward it while we await the full arrival of God’s eternal kingdom. Recognizing that we are all sojourners on this land, no matter what our legal status, compels us to extend solidarity to all. This deep sense of solidarity with others is a foundational truth of our country. We are a nation with historical roots grounded in immigration: out of necessity, many of our ancestors came to this country, and then found a home here.

This perspective can help inform our current perspectives on immigration. Remembering our own history as immigrants, we must take God seriously when, in Scripture, he repeatedly calls on his people to remember their past as sojourners and to treat the aliens among them accordingly. “The strangers who sojourn with you shall be to you as the natives among you, and you shall love them as yourself; for you were strangers in the land of Egypt” (Leviticus 19:33-34). Throughout the Old Testament, God repeats the command to love the alien just as he himself does (Deuteronomy 10:18), and makes clear his desire for us to emulate his special concern for the foreign-born who, along with orphans and widows, are recognized as particularly vulnerable (Psalm 146:9, Zechariah 7:10).

In the New Testament, Jesus helped define our neighbors for us in the Parable of the Good Samaritan (Luke 10:25-37). He tells of an individual who encounters and serves a migrant, presumably of a different culture, in need — and he commands us to “go and do likewise.” Jesus also tells his followers to welcome the stranger (Matthew 25:35) when he says, “what you do to the least of my brethren, you do unto me” (Matthew 25:40). These biblical principles can help guide us as we consider how to treat immigrants today, both on a personal and societal level.

Throughout the history of the United States, immigration has brought out our best hopes and worst fears. While we tend to romanticize immigration of an earlier era, immigrants today are immigrating for the same reasons our ancestors came to the United States: provision and protection for their families, religious freedom, and hope for a better future. George Washington, in the earliest days of our country, wanted to create a welcoming society “open to receive not only the opulent and respectable stranger, but the oppressed and persecuted of all nations and religions.” However, immigration has also always caused fear among others, even as far back as the pre-colonial era: Benjamin Franklin, for example, had concerns about Germans assimilating in Pennsylvania, a colony founded by the English, and doubted whether the Germans could adopt the English’s language and customs.

Our history teaches us that immigrants who were once feared and thought to be unable to assimilate are now embraced as Americans with deep roots in this country. Thus, we must not be driven by a spirit of fear that produces a hardness of heart, but rather we must extend grace and a welcoming spirit to the immigrants who live in our communities. Although it may be uncomfortable at first, we need to get to know our new immigrant neighbors; as we do so, we find how eager they are to become Americans and contribute to our society. We can be sure that in these interactions, fears and differences will fade, and each person will be recognized as “endowed by their Creator” with a dignity that transcends earthly circumstance.

One response to “VIDEO: Senator Jeff Sessions Says There is No ‘Scriptural Basis’ for Immigration Reform”