Talk about a resounding #NoMames rejection of today’s Heritage Foundation report, entitled “The Fiscal Cost of Unlawful Immigrants and Amnesty to the U.S. Taxpayer.” We’re talking the Cato Institute, Americans for Tax Reform, the Kemp Foundation, and the American Action Forum, to name a few.

In short, the entire premise of the report from Heritage was this: more immigrants mean more entitlement spending, which means more burdens on taxpayers. The fear-mongering theory is so defeatist that it is laughable. It makes the assumption that people in other parts of the world would be willing to leave their home countries so they can get U.S. government handouts. Forget the idea of trying to work hard and make it in the U.S. It is also assumes that the estimated 11 million undocumented individuals in this country will immediately be added to the welfare rolls. 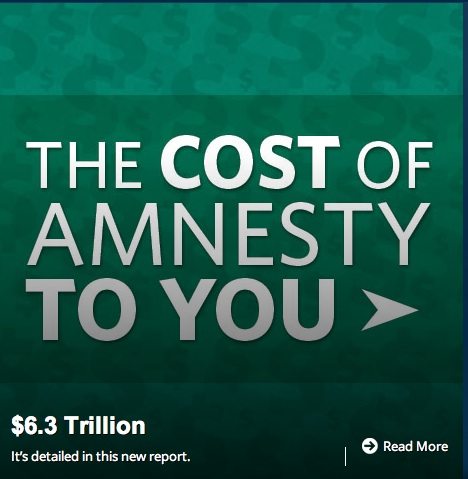 First up is ATR’s Josh Culling:

The Heritage Foundation is a treasured ally in the conservative movement and a pillar of the conservative policy community. However, this study is every bit as flawed as its 2007 iteration.

This static analysis takes into account none of the universally-accepted economic benefits of immigration, choosing only to focus on costs. But the costs estimates are unfairly inflated. The authors count overall household costs, which often includes benefits paid to native-born, low-income American spouses and children of immigrants. Those costs would exist regardless of the immigration status of one’s partner; this is an indictment of our current welfare state, not proposed immigration reforms.

ATR has worked tirelessly to reform our unsustainable entitlements, and will continue to do so. We should not put a pro-growth reform of our broken immigration system on hold while we do so. In fact, America should welcome more legal immigrants to pay into the system without receiving benefits and boost the economy while we work toward sustainable reform.

Lawmakers and the American public should rely on an accurate accounting of immigration reform’s costs and benefits. Unfortunately, this study inaccurately reflects only one side of the ledger. Even the establishment Congressional Budget Office, which Heritage, ATR, and others have excoriated for employing only static models, will take economic growth into account when it scores the bill. I had hoped the same of the conservative movement’s happy warrior for dynamic scoring, the Heritage Foundation.

Next up is Cato’s Alex Nowrasteh, who predicted a month ago that Heritage’s 2013 report would be flawed and basically said the same thing two days before the 2013 report was released:

The key flaw in Heritage’s 2007 study is its use of static fiscal scoring, rather than dynamic fiscal scoring, to evaluate that year’s immigration reform bill. “Scoring” a bill means predicting its impact on the U.S. budget in the future by estimating how it will affect future spending and tax revenue. A statically scored prediction assumes the bill will not affect the rest of the economy – which is highly unrealistic.

A dynamically scored prediction, on the other hand, assumes that the bill will affect the rest of the economy, also changing tax revenue and government spending. Since increased immigration will increase the size of the economy, it will also increase tax revenue and some government spending. It’s important to factor those increases into any scoring model. Heritage’s 2007 study did not.

The Congressional Budget Office (CBO) has adopted dynamic scoring for the coming immigration bill for reasons they explain here.

Jimmy Kemp, Jack Kemp’s son, said the following, according to the Washington Post:

“My dad was a significant supporter of immigration reform.” Objecting strenuously to the idea that immigration reform weakens the economy by adding workers, he exclaimed, “People are not a drain on society.” Saying it was “surprising they took a static approach,” he said bluntly, “You can’t lead from a place of fear.”

And then there is this infographic from the American Action Forum: 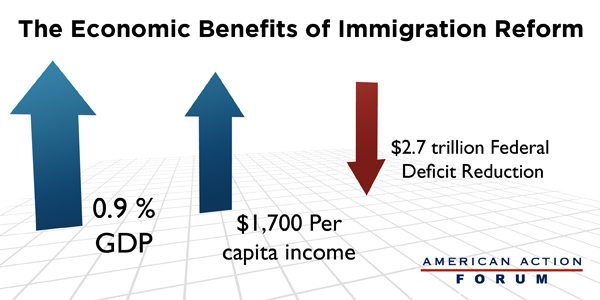 The AAF’s Douglas Holtz-Eakin was also pretty blunt today in response to the Heritage study. As the Post article states:

The prize for candor, though, went to American Action Forum’s Douglas Holtz-Eakin, who stated flatly, “It really misleads.” Without dynamic scoring, H1-B visas, a guest worker program, and the other economic pluses from immigration reform and with a load of ludicrous assumptions (e.g. everyone would qualify for government benefits and take them) Heritage, he said, “gets a really big number.” He continued in describing the Heritage view of immigrants, “There is no American dream. They start in poverty. They end in poverty. Their kids are in poverty.”

Finally, the Post also got a reaction from Mario López of Hispanic Leadership Fund:

Why are these conservative heavyweights so exercised? It is not merely about immigration. Mario Lopez from the Hispanic Leadership Fund said, “There is a reason why dynamic scoring is important. In a word, it’s capitalism.” Citing former Heritage chief Ed Feulner and Nobel Prize winner Milton Friedman he bemoaned Heritage for setting a bad precedent and succumbing to a view that more people mean only costs, poverty, government benefits and higher unemployment.

So the criticism has been extremely consistent, yet reports like Heritage’s are just part of a narrative that has been around for decades: that all immigrants put an economic strain on a government. However, this time around, many influential conservatives are speaking out, even one of the authors of the 2007 Heritage study. He basically slams the 2013 report with pure wonkiness:

A new Special Report from the Heritage Foundation has come to my attention, and I am disappointed in its poor quality. Heritage.org asserts on its main page in the biggest font I have ever seen (and I worked there for years) “The COST of Amnesty TO YOU > $6.3 Trillion.”  Here we go.

It must be remembered that the same analysis was done by the same author in 2007, then warning the cost of amnesty was $2.6 Trillion (HT Andrew Stiles). But the current report indicates that the status quo cost of unlawful immigrant households is roughly half of the amnesty cost, which means YOU are already paying $3.15 Trillion. By this logic, the status quo (thanks to inaction six years ago) is more expensive than if reform had passed in 2007, to the tune of half a trillion dollars. The pileup of outlandish Heritage estimates presents a credibility hurdle.

One is left to wonder who will still stand by Heritage on this issue, because they just got schooled by their own family today.

One response to “Conservatives to Heritage Foundation Immigration Study: #NoMames”