UPDATE (from the Los Angeles Times): Rodriguez told ABC23 that “the more incriminating video was one on the other cell phone.” He said that video was shot “while the batons were swinging.” Rodriguez added the second phone was returned to his client with no video. If a video was erased from that phone, he said, it could not be recovered because of the type of the device.

After much anticipation, attorney Daniel Rodriguez finally released a cell phone video taken by one of his clients on May 8 in Bakersfield, when David Sal Silva died in custody. This video was from one of the cell phones initially seized by Kern County police later that night. Rodriguez also raised questions about whether another cell phone video was deleted.

Here is what local news reported:

“The question becomes, was the video ever there? If it was, was it deleted? Was it extracted? And for this kind of cell phone camera, you cannot tell whether it was deleted, extracted, or whether it was ever filmed. We can’t tell,” Rodriguez said.

Kern County Sheriff Donny Youngblood held a press conference last week where he also questioned if there was any video on the other cell phone.

“Was there a video on that second phone or was there not? I hope to God the FBI can give me that answer,” Youngblood said.

23ABC asked Rodriguez if his client verified that there was a video on the phone and Rodriguez said he is also trying to piece together the information.

“Did she verify it? Did she look at it? I don’t know for a fact. I’m assuming from what I’ve read but when I met with her, I did not ask her that question,” Rodriguez said.

And there are more questions than answers as this investigation continues. 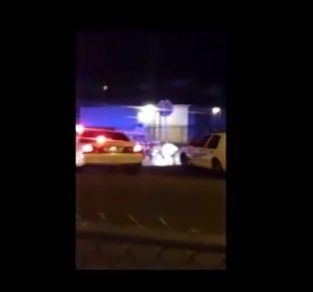 Here is the raw video published by the Los Angeles Times:

Here is what the Times reported:

Silva died May 8 about an hour after the altercation, during which authorities say Kern County sheriff’s deputies wielded batons to control Silva. The footage made public Monday does not show any of the baton strikes. A grainy security surveillance video obtained earlier by The Times showed deputies swing batons toward a man on the ground.

The latest footage to become public is from a cellphone in the possession of attorney Daniel Rodriguez; according to the TV station, the phone belongs to one several witnesses to the beating. The cellphone has already been analyzed by the FBI, along with another phone.