When you defend a show, you have to defend it all the way, and no one is questioning Eva Longoria’s intent to keep defending “Devious Maids,” which premiered Sunday to mixed reviews (our own review here) and sluggish ratings.

You can say what you want, but you have to admit that the public relations machine that is behind the show is doing its job. Yesterday, The New York Times wrote another story about the show, besides the bizarre review it published a few days earlier.

In this latest Times piece, the focus is on Longoria and her growing political clout, something we truly admire. A lot. Nevertheless, as the Times story shows, we wonder if “Devious Maids” was good use of Longoria’s influence. Unless she has a bigger plan in mind, it still perplexes us why a show about five Latina maids was worthy of unwavering support from the Mexican American Legal Defense and Education Fund (MALDEF), the National Council of La Raza (NCLR) and the National Hispanic Media Coalition (NHMC), for example. The “sad inconsistency” that our publisher penned a few weeks ago was front and center in the Times article, and it still raises questions about how now someone associated with non-profits is using that association to push her for-profit projects. That is what power is all about, we guess, but was this the issue Longoria and her supporters wanted to promote to the community? We don’t think so.

The Times article also revealed a few more layers to an issue we feel speaks to the bigger topics of identity, culture, and mass media. For example, “Devious Maids” creator Marc Cherry (yes, this is Cherry’s show) commented about Longoria’s stature in the Latino community, “At some point she blossomed into this spokeswoman for the Latin community, as someone who was involved in political issues, meeting the president, going to the White House. I became super impressed with her decision to lead a more meaningful life than your typical Hollywood actress.”

So it is no wonder that Cherry chose Longoria to give “him her blessing to do the show with an all-Latina cast.” Cherry knew that his idea to produce a show based on a Mexican telenovela about five Latina maids would have never cut it if he were the lone voice on the project (“I know that eyebrows are raised when a middle-aged balding white guy decided to write a show called ‘Devious Maids’ — I get it,” he told The Times), so bring in the Latina powerhouse to justify your show and review your scripts.

However, Cherry made a huge miscalculation. Longoria might have had a strong group of Latino organizations supporting her, but in the age of social media, Longoria is just a single voice. And so are MALDEF, NCLR, and NHMC. All those voices were just one of millions representing the community. Socia media has made all those voices as equal as anyone else’s voice. In the case of “Devious Maids,” the reaction against the show came from the ground up. It was not generated by some PR machine. Remember who started this latest debate? A Latina blogger who wrote a HuffPost piece about the show. The Latino organizations showed up later, and only when Longoria needed help, because by then social media had taken over. That help came too late because in the end, those organizations are still stuck in traditional media ways.

All you need to know is why did these organizations think that the following image associated with their respective logos would make for positive publicity? 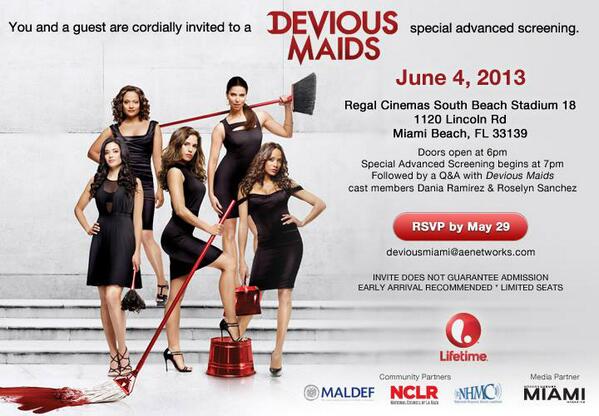 Yet we still do admire Longoria a lot for sticking to her defense:

Now [Ms. Longoria] finds herself in a position of having to defend her latest project against critics who say the show relies too much on the cliché of the Hispanic maid.

“When people talk about stereotypical maids, these maids are anything but,” Ms. Longoria, 38, said over a long lunch at the Chateau Marmont in West Hollywood two days before the premiere party. She said future plot points would reveal more developed people.

She was eager to counter the negative reactions to the show. “I think it’s important for us to have a dialogue of identity in our culture, and even though this show may not be your experience, it is a lot of people’s experience,” she said. Latinos, she added, “over-index in domestic workers: that is a fact, that’s not an opinion.”

Later in the story, Longoria said something quite revealing that gave us hope that she did indeed listen to what was being said on social media:

Ms. Longoria has two shows in development, one about a Latina mother-and-daughter law firm, and another about two Hispanic politicians. “We are touching every part of the machine,” she said. “And yes it’s about giving opportunities. Who else is going to open the doors, who else is going to write these stories?”

We agree, and maybe this is what Longoria needs to do now, touch “every part of the machine” to “open the doors.” Yet it still stings that a show about five Latina maids is the stepping stone for a better future. Because that is the problem here: many felt that Longoria was just using her clout to promote stereotypical mediocrity and repackage it as something that was great for the community. It wasn’t, and so many people knew that. How do we know? Just follow #DeviousMaidsSpinOffs and decide for yourself.

@julito77 @latinorebels If your Malicious Merengueros met my Subversive Salsa Dancers, the world would implode #DeviousMaidsSpinOffs