The day after Marc Cherry’s “Devious Maids” premiered on Lifetime to tepid ratings and a slew of controversy, Chicago’s Gozamos initiated a #NotDeviousMaids campaign, that would “celebrate famous and everyday Latinas like you. We will honor our accomplishments and give facts about who Latinas are and how we’re impacting this world. We’re here to tell the world, ‘We are not your servants.'” 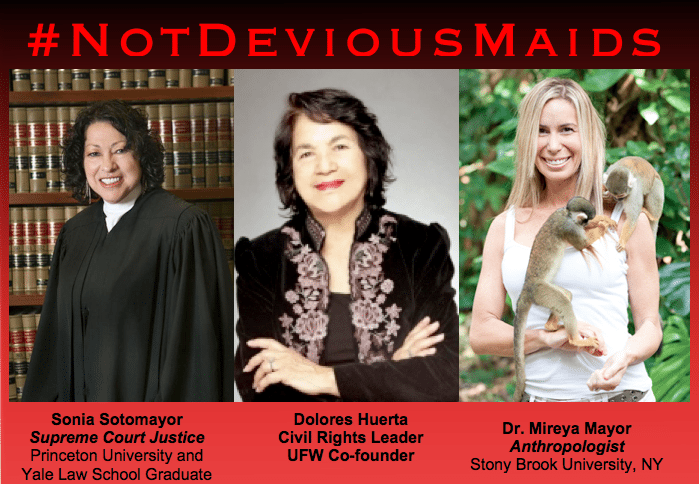 Latinas took to social media to slam the show, recalling how they grew up yearning to see Latinas on TV portrayed as something other than maids, restaurant workers, and criminals. Now in our adulthood, it is our daughters and nieces being exposed to these same images.

The difference is that we can’t just write this off as the “white powers-that-be” in mainstream media not getting our culture and experiences. The executive producer is none other than Eva Longoria, who ironically just earned her master’s degree in Chicano Studies. Two of the writers are Latinas, including a Chicago Latina theater trailblazer who once said that one thing she would change about theater is adding “Multiple voices and perspectives. Hybridity. Respect for our complex identities.” Now she has convinced herself that a show on hypersexualized Latina servitude is pioneering. The most puzzling aspect is that these Latinas are like you and me, products of our shared experiences in the United States. Latinas who, at one time, longed to tell all Latinas’ stories.

And now they are only focusing on one, that of a fiery, seductive maid. That story which dismisses our complex, diverse experiences as Latinas and adds that all-too-familiar weight to our daughters’ shoulders, that weight we carry as we try to prove to the world that we are more than this.

And indeed we are so much more.

To counter these images and honor the role models in our community, Gozamos is launching #NotDeviousMaids campaign. We will celebrate famous and everyday Latinas like you. We will honor our accomplishments and give facts about who Latinas are and how we’re impacting this world. We’re here to tell the world, “We are not your servants.”

Gozamos is taking submissions for the campaign, and if you are interested, you can send a brief bio and picture to hola[at]gozamos.com. Meanwhile, the campaign has gotten the attention of Tanya Saracho, a Chicago-based playwright who is now writing for “Devious Maids.” This is the comment she posted on the Gozamos’ post:

Hello,
I am the “Chicago Latina trailblazer who has convinced herself that a show about hyper sexualized Latina servitude is pioneering.” I do have to say that the sentiments I expressed are a bit mischaracterized: I actually said that having five Latina leads on the show is pioneering. Not the roles they’re playing. But that is neither here nor there. I agree with a lot of what you guys are saying (it’s the very same thing I said when I heard about the show over a year ago) and I will not try to defend any of it. (Also, I love Gozamos and I totally support the dialogue this motion will engender.)

But I guess I just wish you guys could have the larger picture in sight. It’s about infiltrating the castle — because, as of now, we haven’t been able to storm it. Just think of Devious as a Troyan Horse.