Proving once again that nothing on the Internet can be deleted, “a racially charged tweet issued by Steve Lonegan’s U.S. Senate campaign has drawn fire from Newark Mayor Cory Booker’s campaign as well as city leaders who say the Republican candidate is out of step with the values of New Jersey voters,” reports NJ.com.

Here is what the Twitter profile of Lonegan’s campaign (91 followers… for now) tweeted: 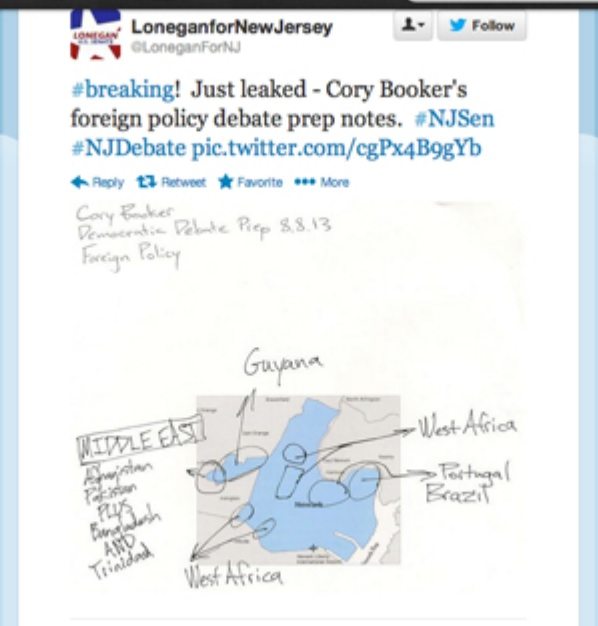 Sent via email from a reader

This is what NJ.com reported:

Below it was a map of Newark, with the words “West Africa, Guyana, Portugal, Brazil” and “Middle East, Afghanistan, Pakistan, plus Bangladesh and Trinidad” scrawled across the map, apparently depicting Newark’s different neighborhoods. The city, New Jersey’s largest, is 52 percent African-American and only 26 percent white, according to 2010 census numbers.

The tweet is now gone, the damage has been done. The Facebook page of Newark mayoral candidate Anibal Ramos Jr. said the following:

“Have you seen this yet? As a proud lifelong resident of the great city of Newark, I found the message sent from Steve Lonegan’s Twitter account completely offensive. Newark’s strength is its diversity. We celebrate and welcome all cultures, races and ethnicities to our city. He really should reconsider whether he wants to represent the great state of New Jersey, with all its diversity. We really don’t need someone with his extremist views in the U.S. Senate.”

Lonegan is the former mayor of Bogota (ironic), New Jersey, made famous from the 2005 documentary, “Anytown, USA”. And Lonegan isn’t a fan of immigrants, either. His recents thoughts on immigration? Here you go:

“I think it’s unacceptable to think that we’re going to send 11 million people home. … But the standard for those who have come here illegally needs to obviously be … stricter for achieving that over time. The people who are criminals, those who have just come illegally as drug pushers or whatever, need to go home and I believe those immigrants who have been here for a long time, we have to consider that. America’s a very giving country, however, as Milton Friedman said, you cannot have open borders and open welfare. Those immigrants who are here today should follow a tougher path, however, they should be required to have sponsors just like legal immigrants have to have.”

Rick Shaftan, an adviser for Lonegan, insisted today that “Steve didn’t find it funny or reflective of the way he thinks.”

“He called and said, ‘What is this? Take this down immediately,'” Shaftan said.

The Booker campaign also responded in the NJ.com piece:

“The Lonegan campaign’s tweet is inappropriate, offensive and fundamentally out of step with New Jersey values. It’s also not surprising,” Booker campaign manager Addisu Demissie said. “This is the same misguided person who was offended by an advertisement simply because it was in Spanish. We need leaders who will lift up our communities, not tear them down — leaders like Cory Booker.”

In 2006, Lonegan objected to a McDonald’s billboard in Spanish in Bogota and proposed making English the Bergen County borough’s official language. The billboard remained and the proposal was rejected.