When You Are Not Latin@ Enough: The Sad Case of Jakiyah McKoy, Little Miss Hispanic Delaware 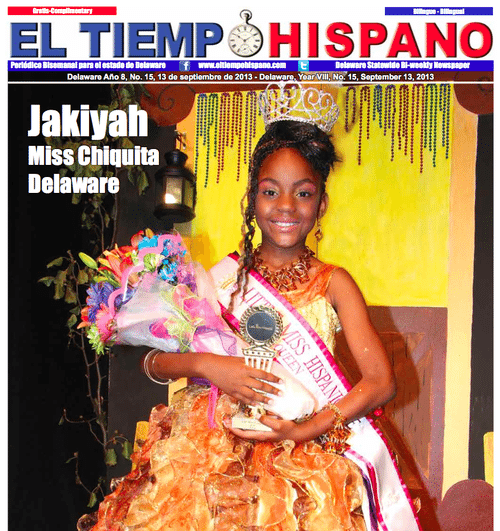 “There was uproar when the winner was announced because, according to the public, she was not the best representative of a Latin beauty.”
According to a college friend of mine, who knows the family: “[the pageant] required proof of only her ethnicity, not the other contestants. On top of that they take her title and crown away, because she can’t show proof of ethnicity because her undocumented grandmother who was from the Dominican Republic, which gives her the necessary 25% of Latino ancestry, is deceased.”

Why is Jakiah “not the best representative of Latin beauty”, could it be that she is of African descent? Just a speculation. I am fleshing out this story as we speak so stay tuned.

There was uproar when the winner was announced because, according to the public, she was not the best representative of a Latin beauty. The winner was Jakiyah McKoy, first runner Meriana Ayala, second Eleiana Santiago and third Katherine Fred-Martinez.

The new Miss Chiquita Delaware Jakiyah McKoy, age 7, was born in Brooklyn, New York. She is descendant of her grandmother who was born in the providence of La Vega in the Dominican Republic. Her mother lives in Brooklyn, New York, and Jakiyah lives in Wilmington, Delaware with her father. She likes to sing, dance and watch movies with her grandmother. She has two siblings, her brother Shad and her sister Jamiyah; she loves spending time with her aunts, uncles, and her cousins and loves her God Mother Relly. Her favorite pastime is drawing.

A few bloggers have weighed on the issue. Here is just one example:

After being announced the winner, there was an uproar stating that she is not the best representative of Latin beauty. It never ceases to amaze me how so many Latinos that I meet in my personal life who are so oblivious to the racial diversity in their own community. I hate to bust some folks bubble, but not all Latinas look like Jennifer Lopez. I’m not Latino, yet I myself have personally met and rubbed elbows Latinos who look like Denzel Washington, Merryl Streep, Mahmoud Ahmadinejad, and Sun-Young-Moon. Where have these Latinos been all of their lives assuming you have to be a certain color to be Latino.

A Change.org petition by @djolder has been formed. Here is what that petition says:

Jakiyah McKoy won the Little Miss Hispanic Delaware pageant but the sponsoring organization, Nuestras Raices Delaware, has blocked her win after an outcry from people claiming that, because she is Black, she is “not the best representative of Latin beauty.” The title is now pending while the commitee “investigates” Jakiyah’s heritage. Meanwhile, none of the other competitors were subject to such an investigation.

We would like to remind everyone that Jakiyah is seven years old, and seriously, who gets to decide who is “Latino enough?”

12 responses to “When You Are Not Latin@ Enough: The Sad Case of Jakiyah McKoy, Little Miss Hispanic Delaware”