In observance of Women’s History Month, LatinoRebels.com celebrates the Latinas who are making important contributions to our society across industries, sectors and movements. This week, Rebeldes Mónica Ramírez, Jen Wilton and Luis Marentes worked together to highlight some of these incredible leaders. They are role models in their communities, schools and workplaces. We thank them for their leadership and for their tireless efforts to make our world better each and every day. 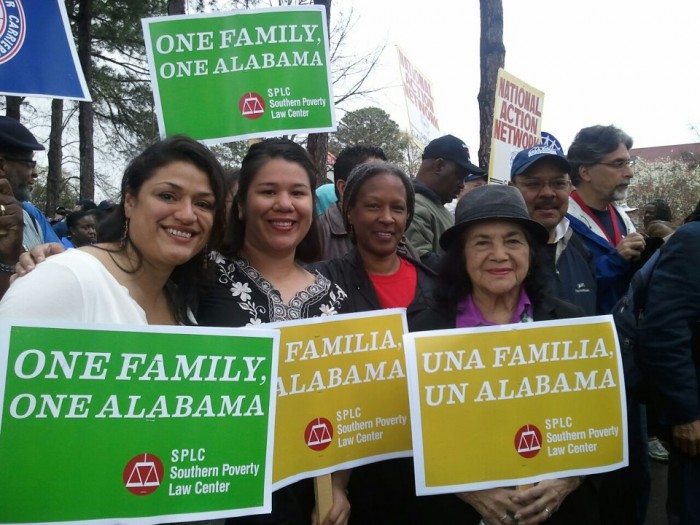 Today we begin our series by spotlighting some of the Latinas who have made a significant impact in the fight for civil rights, including the fight for immigrants’ rights.  Historically, Latinas in the United States have confronted a number of civil rights issues, including discrimination in employment, housing, and education.  Latinas have been denied their voting rights and have been subject to amplified anti-Latino and anti-immigrant sentiment, including an increase in hate crimes.

Below is a short list of some of women who have helped promote equal rights for all:

Dolores Huerta is one of the most important labor rights, civil rights, human rights and women’s rights activists of all time. Among her many accomplishments, Huerta co-founded the United Farm Workers with Cesar Chavez in 1962. Today she is the President of the Dolores Huerta Foundation.  Through her activism she has worked to achieve the passage of new laws and protections for farmworkers and others.  She coined the phrase, “Sí Se Puede,” which has been used as a slogan for the farmworker movement and many other important campaigns, including President Barack Obama’s  for President of the United States. Huerta has received many awards and recognitions for her incredible advocacy, including the Presidential Medal of Freedom.  She was also inducted into the National Women’s Hall of Fame.

Felisa Rincón de Gautier, commonly referred to as “Doña Fela, was a passionate and staunch leader. She first rose to the spotlight for her activism in the fight for women’s right to vote, which was achieved in Puerto Rico in 1932.  In 1946, Rincón de Gautier became the mayor of San Juan, Puerto Rico, the first female to hold this post in the Americas.  She was mayor for 22 years. Rincón de Gautier promoted the well being of the Puerto Ricans that she served. She focused on improving the infrastructure and health systems on the island. She died in 1994 at the age of 97. Rincón de Gautier helped pave the way for other Latina politicians.

Sylvia Méndez and her siblings were catapulted into the limelight when their parents Gonzalo and Felicitas made the decision to fight for the right for their children to receive the same educational opportunities as white school children.  In 1943, Latino students in California and other parts of the U.S. were still subject to school segregation. Mendez’s parents, along with a group of other parents, sued four school districts in California in the case Méndez vs. Westminster for discriminating against Latino students.  The Court found that school segregation was unconstitutional. The Méndez case resulted in school desegregation in the state of California and laid the foundation for school desegregation throughout the United States.  Méndez was awarded the Presidential Medal of Freedom in 2011.

Ana Avendaño, recently appointed the Vice President of Labor Participation for United Way Worldwide, USA, previously served as Assistant to the President and Director of Immigration and Community Action at the AFL-CIO. Through her work, she promoted critical labor-community partnerships and worked to connect the labor movement with Latino and immigrant communities.  Avendaño helped represent the labor community in discussions with business leaders in the immigration reform debates, leading to the historic shared principles that were announced prior to the introduction of the “Gang of 8’s” immigration legislation. She formerly served as Assistant General Counsel to the United Food and Commercial Workers International Union where she was one of the leaders in the labor movements’ call for immigration reform and legalization.

María Gabriela (Gaby) Pacheco  is a leader in the immigrant rights movement.  Pacheco first gained national recognition in 2010 when she and three other immigrant youth leaders set out for a four month walk from Miami, Florida to Washington D.C. with the goal of raising awareness about the plight of undocumented youth.  Their action came to be known as the Trail of Dreams and their mission was to push for the passage of the Dream Act.  She and her colleagues set out to educate Congress about the reality of undocumented youth and adults who were brought to the United States as children.  Pacheco and her family moved to the United States from Ecuador when she was eight years old. Consequently, like hundreds of thousands of other immigrant youth, she grew up and studied in the United States.  However, she did not have legal status to live or work in the United States.  Pacheco’s leadership helped pave the way for the   federal government’s decision to permit certain qualifying youth to apply for deferred action from immigration deportation, along with the opportunity to attend college and work.

Of course, this list could go on and on. Who would you add to this first list? Share your thoughts in the comments section below. We will have another one tomorrow.