We debated about whether we should call attention to a Lossip.com click-inducing piece called “Could They Pass? 10 Latino Celebs That Look Caucasian,” but after reading it (four times), we couldn’t resist. 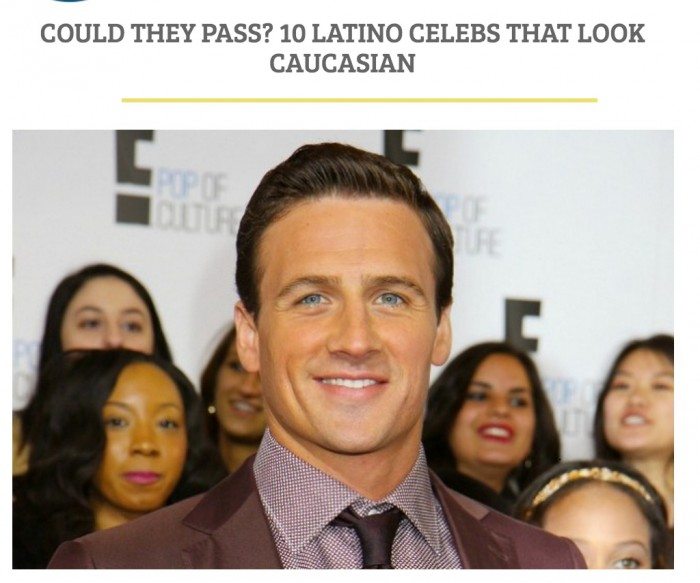 America’s a melting pot. America’s also the land of interracial families. For these 10 Latinos, one look at them could make you question their ethnicity. So we had to ask; could they pass for Caucasian?

Ryan Lochte
The swimming hottie could definitely pass. Actually the question should be ‘Could he pass for Latino?’

Iker Casillas
The Real Madrid star is Spanish, so it’s no surprise to us that he could pass.

Juan Pablo Galavis
His light golden-blonde hair could help him pass for another race.

William Levy
If we didn’t know his heritage, the Cuban-born hottie could be Caucasian in our book!

By looking at him, it’s possible you couldn’t even tell he’s part Puerto Rican. Oh ya, and he also speaks Spanish!

Back to the stupidity:

Mark Ballas
The Dancing With the Stars pro is part Mexican. Other than his last name, would you just have assume he was Caucasian?

Eddie Cibrian
He’s been with several Caucasian women, so it’s only natural if people automatically assume he was as well. He’s actually Cuban.

As you might imagine, readers are a bit too smart. Here are just some comments from the site:

The most stupid premise for this article would be assuming that “latino” is a race, not a culture. From Pele, through Fujimora and Shakira latinos come in every race, color and ethnic background. Passing for “latino” just assumes that stereotypes are the general norm, when in reality they simply show gross ignorance.

It’s possible to be 100% Latino and 100% “Caucasian,” which I assume the writer thinks means white. Latino is like saying American: you can belong to any race or mix of races and be 100% Latino. I’m one myself, and I know plenty of other Latinos who are 100% genetically Chinese, Arab, German, Irish, African, and so on. The whole premise of the article is wrong.

OK what is the point of this article? Latino is an “ETHNICITY” not a race, Latino’s can be WHITE, BLACK, ASIAN or INDIAN/INDIGENOUS what century is this? The 21st Century and people still don’t understand that?

This whole topic is a prime example of internalized racism. Time was blacks were preoccupied with who could pass for white; now it’s the Hispanics. When will we accept it’s fine to be who we are, to LOOK like our natural ethnicity? Why is “passing for white” such a gold standard? When it comes down to it, most white people are odd looking and not that bright.

What a stupid, insulting, anachronistic article. We Latinos come in all colors and flavors, but “passing for Caucasian?” Give me a break. Disgusting.

We can’t anymore, we just can’t.