UPDATE, September 7, 2014: Bandidos has responded on its Facebook page. In case you want more context, meet the owners. 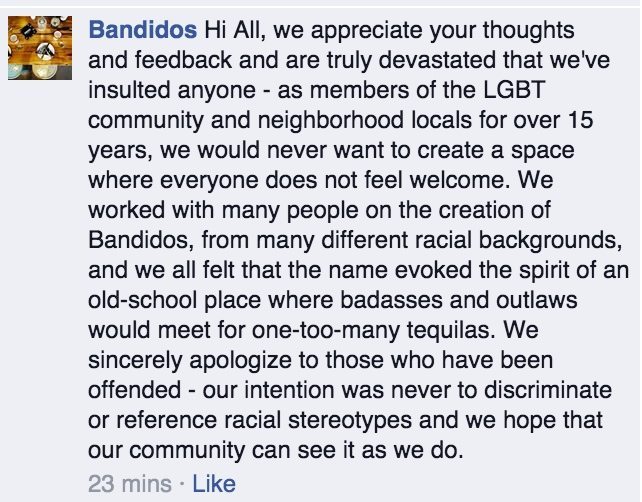 That led to Gómez, who lives in The Castro, to write the following: “Hi Bandidos thanks for responding—we would like you to change the name. I know that is a monumental task but we would like to talk about it. Also with a name like you have I shudder to think what kind of cultural expression you are going to have on Mexican holidays like Cinco de Mayo –Día de Los Muertos– is this going to be a place where people can get loaded and disrespect Mexican Heritage further? Or can you somehow make this right? I have mixed feelings about this but something needs be done.”

She also added this, “Basically Bandidos you revived and old ethnic slur. It’s really bad – Mexicans are Thieves. So weird this happened and I wish I had been in that group to steer you to another name—your group let you down. This name will never stop hurting many Latinos and many gay Latinos.”

We will see. Additionally, some of the deleted Facebook comments are back again.

This week, a restaurant called “Bandidos” is getting attention on Facebook, but for the wrong reasons. A few of our San Francisco fans alerted us to the name, with one person telling us, “Latino Rebels what do you think of a non latino “upscale Mexican” foodie restaurant in San Francisco calling itself BANDIDOS? They opened 3 nights ago. I would love for them to change the name – is that to much to ask? At least explain why they picked that name.” 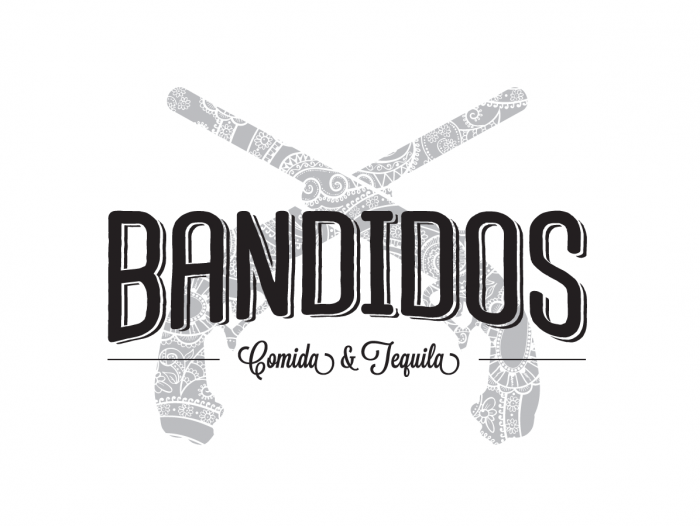 That same person, Marga Gómez, posted the following on the Bandidos Facebook site before the comment was removed: 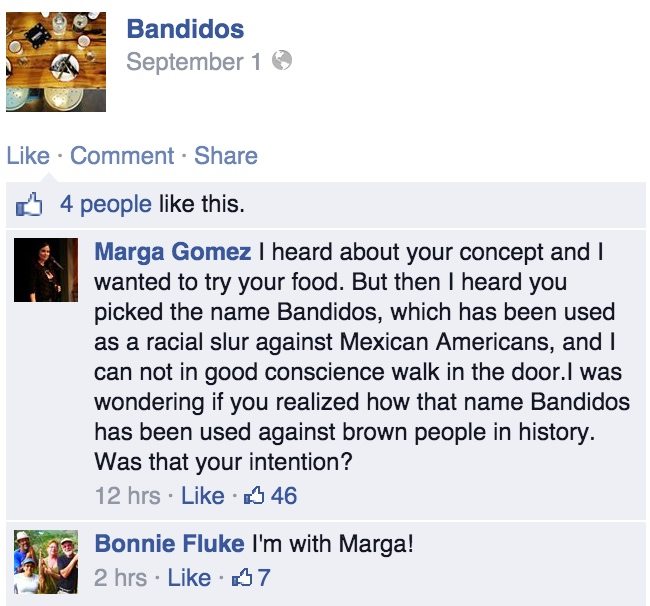 While Gómez’s comment (and those by others) no longer appears on the restaurant’s page, people are still trying to comment. This was posted just this afternoon:

In addition, people have begun to write reviews such as the following: 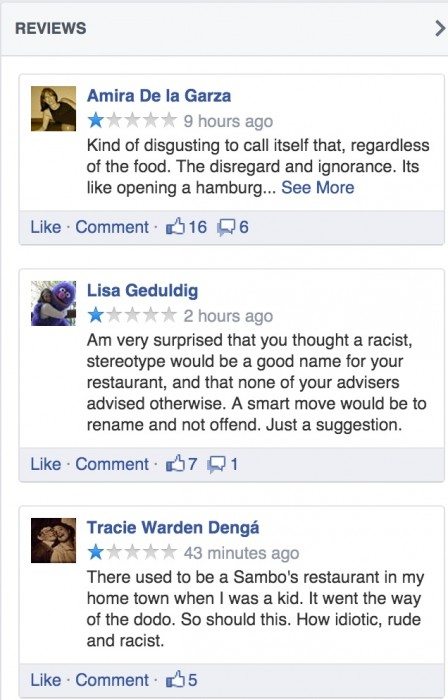 “Kind of disgusting to call itself that, regardless of the food. The disregard and ignorance. Its like opening a hamburger shop in Cancun and calling it some insulting term used to refer to white Americans. I’m going to do my best to turn everyone I know in the Bay Area against this place until they close or change their name.”

“Am very surprised that you thought a racist, stereotype would be a good name for your restaurant, and that none of your advisers advised otherwise. A smart move would be to rename and not offend. Just a suggestion.”

“There used to be a Sambo’s restaurant in my home town when I was a kid. It went the way of the dodo. So should this. How idiotic, rude and racist.”

“Change your racist name. So 80s and lazy. Won’t eat here whike it is called this anti-Latino slur.”

“It is never okay to use racial slurs. The name of your restaurant is an offensive slur. Please rename your business and I will consider visiting and referring my Bay Area friends. Meanwhile, I’m encouraging everyone to stay away.”

Most of the initial comments against the name are no longer on the restaurant’s Facebook page. Seems like the restaurant doesn’t want to address the name change. Guess the owners forgot their history.

Looks like The Castro’s newest establishment might have gotten more headaches that it intended to get. Was it that hard to choose a different name?