UPDATE, September 23, 2014: PR51st has confirmed that it has commissioned the Voter / Consumer Research survey. In an email to our founder, the group said this, “PR51st commissioned the survey. We hope that it will help mainland candidates realize that Puerto Rico’s status is an issue of concern to their constituents, and that it is not a partisan issue.” Now that such information has been confirmed, it is pretty perplexing to see PR51st try to spin the results by saying that the statehood results are part of a national trend among mainland Puerto Ricans. (like it does on its blog here, whose headline has now CHANGED after our group alerted PR51st). Basically, PR51st just confirmed our point about how dubious this survey is.

In a survey being heavily promoted by pro-statehood organization PR51st and conducted by Voter / Consumer Research has announced that “an even larger majority of mainland Puerto Ricans favors statehood now than in 2005.” The proof of this claim? Results of a VCR report which interviewed 400 Puerto Rican residents living in Florida’s “I-4 corridor.” The VCR report (which you can read at the end of this post) suggested that these 400 people who live in just one area of the country are full representation of a larger national trend with Puerto Ricans. According to Pew, parts of the “I-4 corridor” (specifically, Orange County) are some of the country’s largest Puerto Rican populations, third to only the Bronx and Brooklyn.

The survey, which has a margin of error of 4.9%, concluded that 64% of the 400 people interviewed favored statehood for Puerto Rico. While such a conclusion is newsworthy, the claims from Pr51st that this is now a national trend among Puerto Ricans living on the mainland is a bit misleading, since the survey was only limited to one very contained and specific geographical area. If you are not asking similar questions from people who currently live in New York City or Chicago, for example, you really can’t make such sweeping national conclusions. Orlando is not El Bronx or Filadelfía just yet.

Yet that is exactly what PR51st is saying: 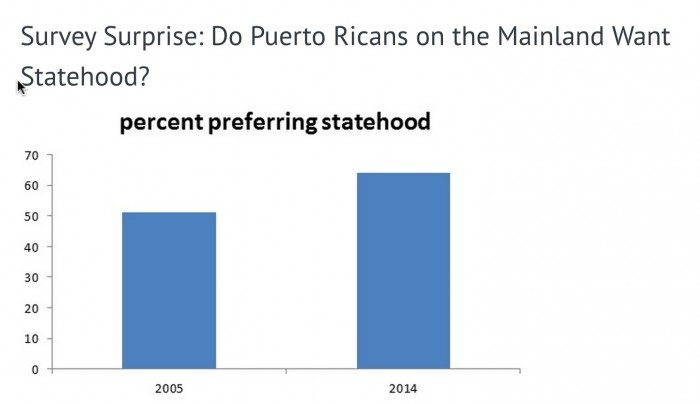 Granted, the “I-4 corridor” will have a strong influence in the 2016 presidential elections based on what happened in 2012, and much of the current survey information can help inform hopeful 2016 candidates and local Florida races. A better conclusion is that the issue of political status for Puerto Ricans living in Central Florida is important to them. It could be an issue for candidates to explore with more seriousness.

But don’t take our word for it, nor that of PR51st or of VCR, which (according to its website) “provides public opinion research to clients in the issues management and political marketplace,” and whose “clients include corporations, associations, political candidates, I&R campaigns, IE campaigns and Republican Party committees.” VCR is not a Gallup or a Pew. The data being presented should be viewed with a very critical lens, and like our founder wrote this weekend, we can safely say that this latest poll is doing exactly what has become the standard for Puerto Rico’s status politics: finding any data you can find, and then announce that it magically matches your status interest. In other terms, this type of survey is like a poll commissioned by Republicans to confirm that Republicans are awesome. The line being presented is blurry.

Maybe it’s time for Gallup to run a new comprehensive poll about this issue, since if you do a search of “Puerto Rico” on its site, the last poll about this issue was in 1998. 1998. And if you search Pew? You don’t get much out of that either. The last kind of legitimate poll we are aware of was from 2013, which interviewed 601 likely Puerto Rican voters living on the island. 71% of those voters preferred statehood. Nothing coming from the mainland.

Here is the VCR survey. It’s about 12 pages long and if you care about this issue, read the whole report yourself and don’t rely on press releases or misleading blog posts from pro-statehood supporters who are twisting the data too far.

Survey of ‘I-4 Corridor’ Puerto Ricans