Ayotzinapa: A Game Changer for Mexico?

The apparent massacre of students from Ayotzinapa in Iguala has completely shocked the Mexican public and provoked outrage across the globe.

Some have called this a game changer for Mexico. In some ways it clearly is, but maybe not in the ways we imagine. 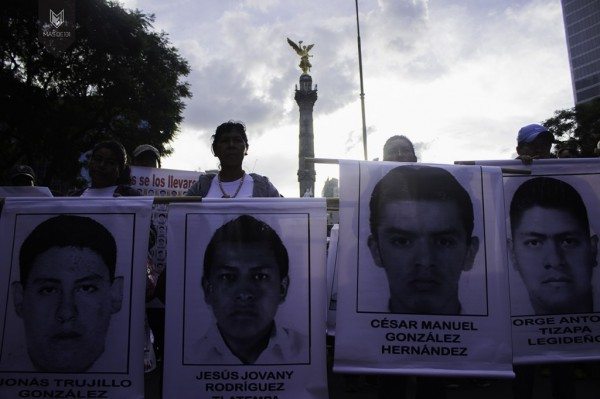 The case of Ciudad Juárez

The brutal massacre at Iguala is far from an isolated event, but rather is the latest in a long line of atrocities that has plagued Mexico for decades. At the root of the problem we often find a complicated web of complicity involving local, state and even federal authorities.

There are striking similarities between events in Iguala and the ongoing murder of women in Ciudad Juárez, where there has been a marked spike in femicides since 1993.

In the book Daughters of Juárez, Univision anchor Teresa Rodríguez and investigative journalist Diana Montané chillingly detail dozens of cases of the rape and murder of women in the lawless border town. For over a decade, the bodies of hundreds of women were unceremoniously dumped in the desolate desert surrounding the city of Juárez. The isolation of the desert helped shield the perpetrators from detection.

But all of this changed, the authors claim, in November 2008, when the bodies of eight women were found in an abandoned lot in the heart of the city. The culture of impunity had become so absolute that those responsible for the crimes were getting bolder and bolder.  “It appeared that the perpetrators no longer feared the police,” Rodriguez and Montané assert.

When public outrage over the eight bodies reached a fevered pitch, two suspects were promptly trotted out, amid claims of forced confessions and use of torture. “When public pressure begins to grow, the scapegoat materializes,” said Óscar Maynez, former head criminologist for Chihuahua, who challenged the official version of events in this and other cases.

Similarly in Iguala, the brutality and boldness of killing 49 out-of-town students is unimaginable. However, the number of mass graves that have since been found dotted around the town point clearly to the fact that the mayor, local police and cartel members are used to enjoying total impunity.

Much like in Ciudad Juárez, the massacre at Iguala signals a total state of lawlessness in large parts of Guerrero. Any doubt of that has now been removed.

The confessions of three gang members, who allegedly burnt the bodies before dumping them in a river, also seems convenient for Enrique Peña Nieto’s administration, which desperately wants to put a lid on this situation. They would love to be able to pin these heinous murders on a few dozen local people and close the case. Obviously, the real cause of this catastrophe is much more complex than the government is willing to admit.

For the people of Mexico, hope lies in what comes next.

John Ackerman recently wrote for Latino Rebels: “Not since the uprising led by the Zapatista National Liberation Army (EZLN) in Chiapas in 1994 has Mexico been convulsed by such a powerful independent citizen movement which seeks to transform the roots of the existing system of repression and inequality.”

We can only hope that this mass mobilization of people, dubbed “la nueva insurgencia cívica,” sparks change that will put an end to the corruption and impunity that has characterized Mexico for far too long.

Jen Wilton reports on social and political issues related to Mexico and Latin America. Jen tweets as @guerillagrrl and blogs at revolutioniseternal.wordpress.com.

2 responses to “Ayotzinapa: A Game Changer for Mexico?”