Late Tuesday evening, a federal judge in Washington, D.C., dismissed a lawsuit filed by Joe Arpaio, the controversial Arizona sheriff who was challenging the legality of President Obama’s executive action on immigration.

In a 33-page ruling issued a day after the court heard arguments from the parties, U.S. District Judge Beryl A. Howell tossed the suit on “standing” grounds, noting that Arpaio only stated “generalized grievances” about the new immigration policy, but failed to point to a “concrete and particularized injury” requiring court intervention.

The judge anchored her ruling on “long-existing regulations” governing deferred action, which are rooted in the Immigration Reform and Control Act of 1986 and have long served as the basis for granting work authorization to undocumented immigrants.

“For almost twenty years, the use of deferred action programs has been a staple of immigration enforcement,” Howell wrote, noting the various ways the federal government has provided such a relief over time.

Arpaio was seeking to put a stop to the program temporarily while the case was litigated in court, but the federal government responded to Arpaio with a request of its own seeking dismissal of the entire case.

Interestingly, much of the court’s reasoning derived from another Arizona case, Arizona v. United States, the landmark Supreme Court case striking down key provisions of SB1070, the state’s infamous show-me-your-papers law. That case made clear that “state law enforcement and other officials have no authority” over immigration matters, which are the exclusive province of the federal government.

The court also brushed aside Arpaio’s pleas that allowing the president’s plan to move forward would lead to threats to his life, that it somehow would make his work as sheriff harder and more costly, and that the new policy would turn Arizona into a “magnet” for new immigrants, particularly criminals.

According to POLITICO, Arpaio attorney Larry Klayman has already appealed the decision, which he called “weak.” 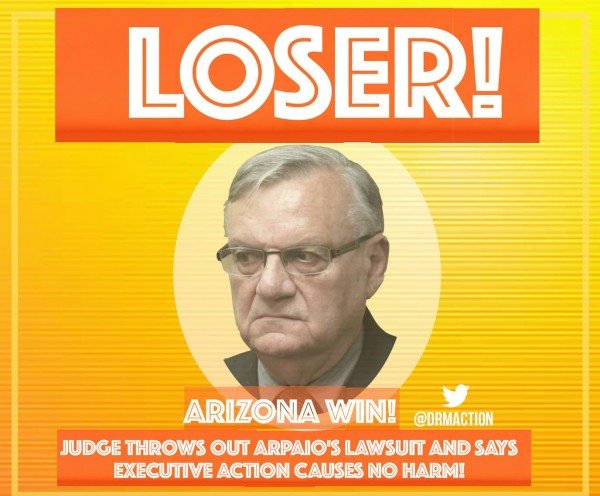 In a footnote, Judge Howell also took a moment to address a recent federal court ruling out of Pennsylvania invalidating the new immigration policy. She deemed that ruling unpersuasive, in part because of the strange manner the judge reached his decision.

Howell’s opinion serves as an important blueprint for what a federal court in Texas might do with a similar lawsuit by Gov.-elect Greg Abbott challenging the president’s executive plan. Since that case was filed, a number of other states have joined the lawsuit, the most recent being Tennessee, according to Nashville Scene.

Cristian Farías is a writer and lawyer. You can follow him @cristianafarias.