As expected, the crazy just got crazier in the controversy surrounding The Santa Barbara News-Press and how its xenophobic “journalism.” Taking a cue from the paper’s story last week —which blatantly implied that people who protested the newspaper last Thursday and left “The Border Is Illegal Not The People Who Cross It” graffiti on the paper’s building were just like the (wait for it, the two brothers who killed 12 people in Paris)— conservative political bloggers are following suit.

This is what Stephen Frank of the California Political Review wrote (seriously, he did): 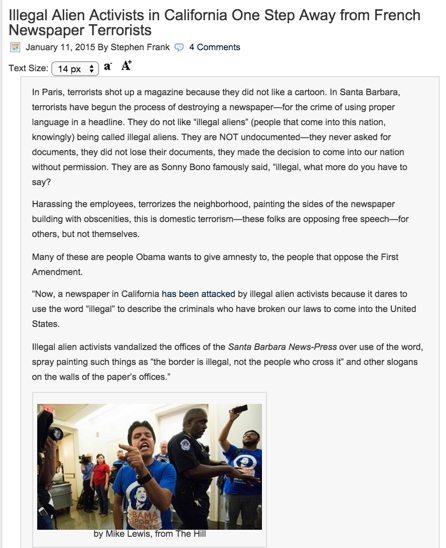 But this is how you sell fear, right? Just give people enough “facts” to justify their outrage and then bring in the falsest of equivalencies to drive the point home.

Desperate times call for desperate measures, we guess. Yet in the end, the extremists will lose.