The following video, posted two days ago on Facebook, has already gotten over five million views, 74,000 likes and 124,000 shares. It is about 17 seconds long, and it shows a flour tortilla on a record player as “Jarabe Tapatío” (perhaps the most overplayed Mexican song ever) plays on.

What a tortilla sounds like on a record player

That 17-second video, very likely picked up by another outlet, has also led to one very intense Facebook thread. Here is just a sample of the discussion (some NSFW language). First off, those who loved it:

If you’re offended by this, blame it on your parents for raising a pansy.

All the fake Hispanics are saying racist xD

I mean is it racist to put a pizza and make it sound like italian music? Or put a burger patty or whatever and hear some american song? I think it’s funny and clever, I see no wrong in connecting different aspects of a culture together, music and food. It’s clever.

How is this racist? Really I’m Hispanic and i find this funny myself, it’s a joke people get with it

liberal fucks make everything racist. im from the border. ElPaso Tx, a proud beaner, and this shit is funny! im tired of all fake fucks making us look like a bunch of pussies. fuck that!!!

It’s an ethnic fact that this is a Spanish originated food. How is this racist because it’s Spanish music? 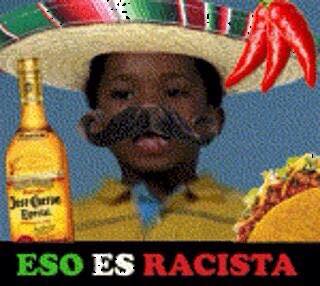 when white ppl try to crack jokes it’s not offensive.

What would the people in suburbs do with racist videos

Yeah we know it’s a silly thing, but think about it: the video clip has gotten over five million views and it has people talking. We’re just bummed that the tortilla didn’t play this instead:

Ok, we’re heading back to Facebook to read the rest of the comments.