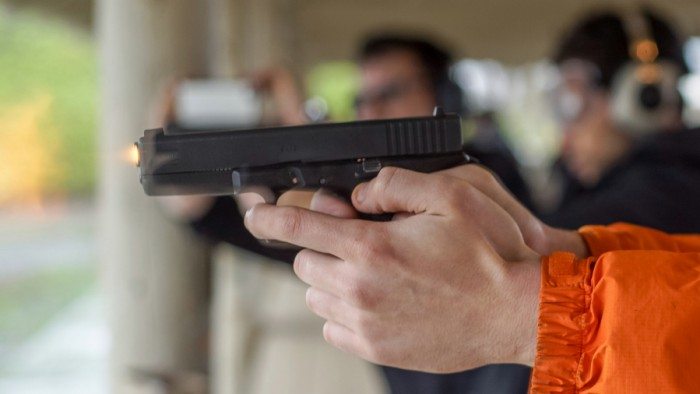 I had a birthday recently and my wife Nicole wanted to surprise me with a Concealed Handgun Licensing class and my first handgun. I was really psyched about it at first but decided it would be pretty irresponsible of me to have a gun in a home where depression also resides.

Most people who own guns claim to have them for protection —you know, just in case a murderer, robber or rapist breaks into their home. But my reason for not wanting one hits much closer to home: it’s not for something that might happen, but for something that happens far too often. Therefore, fear of a future crime doesn’t compel me to own a gun.

My reason for not wanting a gun feels more real because normal fear never lasts. It’s a fleeting, fight-or-flight, adrenaline-packed sensation that comes as quickly as it fades.

There is another feeling, though, that I can’t quite evade or avoid, and I can never tell how long it will last. That feeling is sadness. Sometimes sadness sets in regardless of how blessed or amazing our current living situation may be, because it doesn’t always feel or seem blessed or amazing through the tunnel vision of depression.

If you’ve ever felt so sad that you just don’t even feel like living anymore, then having a gun around may not be the smartest option. A Harvard study revealed a definite correlation between gun ownership and higher suicide rates. That’s not because owning a gun causes a person to be suicidal. It’s just that with a gun, a person is less likely to survive the attempt.

Suicide most often results from an acute impulse, panic and feelings of extreme despair. Once those feelings subside, the thought of suicide is not so prevalent, and the person might live to see another day. But in the heat of those moments of panic and hopelessness, the availability and ease of access to a gun exponentially increases a person’s chances of succeeding at their attempt—were they to actually go through with it.

As a parent who suffers from depression, what I fear the most is that my affliction may have been passed on genetically to my kids. According to a report from the Brady Center to Prevent Gun Violence, suicide among American teens by firearm reached a 12-year high in 2013, with most of those deaths involving a gun that belonged to a family member.

It’s bad enough that my kids themselves would have to suffer through bouts of depression because of my genes, but what’s worse is that I would provide them with the means to take their own lives. If I thought depression made it hard to live, I would not survive a single day knowing that I had made it easier for one of my kids’ lives to ed.

I am in no way against gun ownership. I am in no way a threat to anyone’s 2nd Amendment right. What I am, however, is just someone saying that guns are not for everyone. You will do what you need to do to protect yourself from others, and I’ll do what I need to in order to protect me from myself.

Ray Perez is an actor, artist, writer and musician from the Rio Grande Valley in South Texas. He is best known for getting Joseph Gordon-Levitt to rap in Spanish on the song “The Prize” for hitRECord.org, JGL’s collaborative production company, and for playing the small role of Beggar in the film A Night In Old Mexico opposite Academy Award-winner Robert Duvall.

One response to “Depression Makes a Gun Twice as Deadly”