Last Friday we reported on the growing controversy following the grand opening of a supposedly authentic Mexican cantina in Charlotte, North Carolina. Visitors to the new restaurant were immediately confronted with a large statute perpetuating an ugly stereotype.

This prompted Amalia Deloney, a local Guatemalan-born organizer, to send a letter to the restauranteurs asking that they remove all of the offending images displayed throughout their establishment. 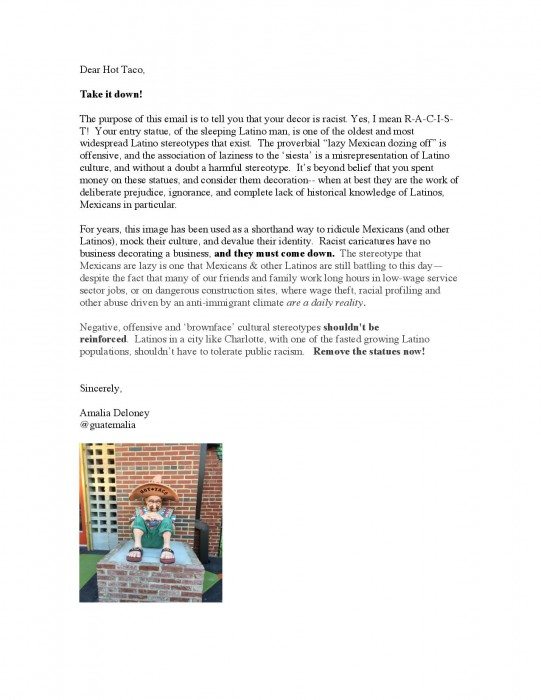 On Monday the blog Charlotte Agenda published a version of the letter in the form of an op-ed. It received a significant response from the blog’s readers, leading the site to post a special review of the aftermath this morning.

On Monday, we published and led our newsletter with an op-ed from Amalia titled, Dear Hot Taco: Take your racist statues down (8,000+ views). There were intense conversations on Twitter, Facebook and Instagram (44 comments), and 188 people signed Amalia’s petition. But below are 13 notes that were directly written to us.

As Williams points out, a majority of the responses is negative.

The first one insists “there is nothing ‘racist’ about the statues outside of Hot Taco” and that Deloney needs to “get over” herself “and quit trying to be so PC!”

The second message tells Deloney to not “be so sensitive” and “let everything bother” her, offering a bit of simplistic advice: “If you don’t like it, don’t eat there.”

@ted_williams those are some sizzling hot takes. I imagine there are a few "Trump voters" in that mix.

Then there are the longer responses, such as this one:

I want to say that I disagree with Ms. Deloney’s response to Hot Taco’s art/decor. I get that it is an opinion piece. But it appears to be with a complete lack of reaching out to understand intention. Ms. Deloney’s vehement conclusion can not be accurate, in any way. This is putting words in Hot Taco’s mouth. Seriously, if this is the way businesses make their decisions, then yes, that is undeniably racist. My very first question to her is, who on earth said that they placed the statues there with ‘deliberate prejudice, ignorance, and complete lack of historical knowledge of Latinos and Mexicans in particular?’ I worked side by side with migrant farm hands very often as a child. Never in my life have I ever considered a Latin, or Mexican person to be lazy. Never. Never ever. And I cannot claim any significant knowledge of Mexican history at all. When the extent of my Mexican culture education is drinking Coronas on Cinco de Mayo, and wishing one of my Mexican friends a Happy Mexican Independence day, when I see it on my calendar, I think that knowledge alone would have Ms. Deloney hurling word javelins at me. Siesta is part of Latino culture. Indeed, it is part of many cultures. It appears to me Ms. Deloney is reading meaning into art/deco which is completely not there. This feels to me to be another instance of over-offense.

I cannot believe that this woman has gone out and started a race war over statues depicting two Mexicans enjoying a siesta after a delicious meal at this restaurant. After Thanksgiving dinner, that’s what people do; talk a nap. This is a Mexican food restaurant; should they have depicted two blacks or asians taking a siesta after their Mexican food meal? Talk about a waste of time. These days you can insight racism over anything. Shame on her and shame on you for posting her petition.

The op-ed on Hot Taco is ridiculous. Let’s get rid of Leprechauns on St. Patrick’s Day and Margaritas on Cinco de Mayo and silly colored beads on Fat Tuesday and the caricature of Little Caesar on the pizza box and every other icon that says we are a diverse society and proud of it. What ever happened to being able to laugh at ourselves? We have municipalities tearing down statues of historic significance in the interest of whitewashing history. Ooops, was I wrong to use the word ‘white’ combined with ‘washing’. Sorry, I did not mean to imply that people of color don’t wash. Out and out racism? Absolutely. Let’s get rid of it — on all sides. Having innocent fun? Sorry, you’re op-ed was out of line.

I wish the writer of the oped piece about Hot Taco would have included a poll to see if readers felt that the decorative statues were offensive or not. We have become a hypersensitive society that looks for offense where there is none. Has she talked with Latinos to see if they feel the statues are offensive? I lived in Mexico for a year, in a non-tourist area, and those type statues and decor are for sale everywhere. I bought bookends that look very similar. It’s just a decoration. Every culture has stereotypes. We go to Oktoberfest at Waldhorn and they are wearing traditional German clothing. We eat at the Chinese restaurant where there is a giant gold Buddha. Is that offensive? How about the Italian restaurant where there is a picture of a fat italian pizza maker? Is that saying all Italians are fat? … But seriously, to get all worked up about the decor of a Mexican place? Let’s just worry about the big things in life.

Much of the same criticisms of Deloney and her perceived overreaction to the statues were repeated in dozens of comments on the site’s Instagram account as well.

Still, not all of the comments were negative, and indeed some people did share in Deloney’s outrage at seeing such stereotypes advertised out in the open.

What would happen if this was a statue of an African American eating watermellon or a caricature of a Jewish individual counting money, or someone of the Asian community cooking a dog…people would be in an uproar. I’m not Mexican either but I am totally not ok with this. Why is it wrong for someone to voice their disapproval for something without being called the PC Police? It’s amazing how the backlash to her petition is coming from those in communities that have never been marginalized. I stand with the author. Kudos.

One response to “UPDATE: Controversy Heats Up Over Mexican Statues at North Carolina Restaurant”