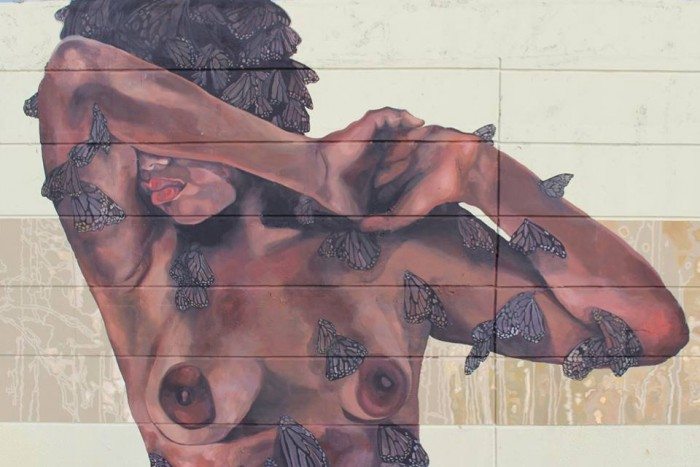 A few days ago, I had to go for a “sequel” I call “Mammogram Part 2: More Images from that One Side” and therefore relive the discomfort of part one, done two weeks prior. And, as I do in many instances of finding gratuitous discomfort, I started asking why over social media.

This past week was also the week of the unfortunate act of vandalism on the Moriviví mural at Avenida Fernández Juncos in San Juan. The target: a dark body in her birthday suit showing her bare chest. The perpetrators of this cheap moralistic shot decided to paint a tacky and generic brassiere on somebody else’s artwork. Why? Not even a stylish brand or some cute lacy stuff, just the regular, run-of-the-mill stuff — which is understandable, since generic minds offer generic products.

And this was the product of a deep religious fundamentalism still making waves in Puerto Rican society and beyond. It is the profound mistrust of the female body, the fear of the possibility of a woman who is comfortable in her own skin regardless of hue, shape and breast-size, the problematic sociocultural fuel that drives such an act of vandalism. It is an act of desecration — both of the art, and of the decolonized female body.

Someone defaced this mural & a group of awesome women protested the censoring of the female body #PuertoRico pic.twitter.com/FBco9dRb0d

Afortunadamente, the possibility is more of a reality, and it happens to be a collective one. Dozens of brave women have taken themselves (their selves) and their bare chests out in public in front of the mural to protest the erasing of what is nothing but the common and (why not) beautiful female anatomy. By individually showing their breasts as they are, in all their variety and freedom of being, these protestors are collectively claiming a significant and crucial ground. In the gamma of rounder shapes, asymmetric pairs, larger areolas and much more, they are demonstrating how liberation starts with the self, with the body and the mind, proudly displaying their breasts against sexist, consumerist, racist standards.

I remember from my early college years at the University of Puerto Rico, fellow women classmates — ages 18 to 20 at the time — referring to the vulva as “lo peor de la mujer.” I have witnessed one too many expressions of someone wanting to augment her breasts to be sexy, in the style of the typical check-out aisle magazine. Also, I have heard way too many utterances from female elder relatives of mine referring to women’s genitalia as some object that is given to men. It all adds up to a sociocultural repulsion for the feminine, the female, women, and their bodies. It is a repulsion painted over and over again with an oppressive and disturbingly widely-available everyday discourse. It is in unchecked repetitions of cultural phrases and popular songs as well as in fundamentalist-driven religious indoctrinations. And the sad truth is that such repulsion not only manifests in a bad-quality $5 brassiere painted over the aforementioned mural, but also in everyday worldwide person-to-person crimes such as domestic violence, genital mutilation, and the abuse of transgendered people.

Last Tuesday, after “Mammogram 2: The Sequel,” I was happy to put on my worn-out but still operational bra I got from Boston Store a few years ago. I was happier to know that they thought there was nothing to worry about from the results of the sonogram, which means that I don’t have to go through the squeezing and paddling until next year.

These past few days, I have been even happier than that. All the women protestors showing their bare chests in their unique and individual — and real — embodiments are putting together an on-going visionary act of resistance. Nothing can be painted over them and their act of solidarity cannot be erased. That is amazingly liberating!

Like I wrote in October 29 Facebook post that first appeared to have been temporarily removed, there is nothing more anti-machismo/racismo/estupidismo que una mujer a gusto con su cuerpo tal cual.

Nancy Bird is a Madison-loving Boricua who lives in Milwaukee. She is a writer, professor and traveler. Her website is nancybirdauthor.com. You can follow her on Twitter @nancybird75.