The headlines are out: 97% of Puerto Ricans who went to the polls on Sunday chose statehood in another non-binding plebiscite, Puerto Rico’s fifth one. As of Sunday night, more than 502,000 people chose statehood with only around 7,770 choosing independence/free association and about 6,800 choosing the current territorial status—commonwealth. 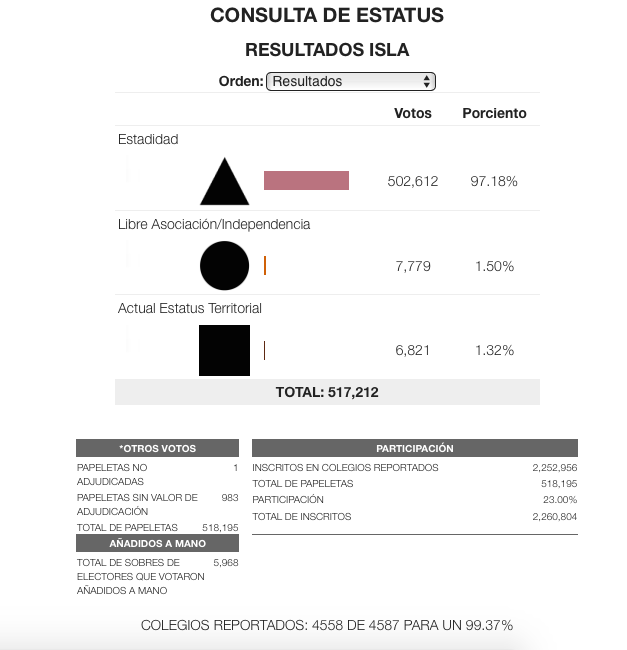 In the next few days, a lot will be said about this vote. Here are few things you should know:

Not a lot of Puerto Ricans voted.

According to the Puerto Rico’s official electoral commission, just 23% of Puerto Ricans voted. In a place known for high voter turnouts (50-80%), the official 23% number is low. Really low. A big part of the reason had to do with boycotts from the island’s commonwealth and independence parties. Pro-statehooder supporters will tell you that this a democracy and the will of the people spoke. Others will say this is just another expensive farce during a time the island is suffering from massive problems. In other words, get ready to see the political spin from the island.

This was the smallest number of statehood votes since 1967.

At the same time, this was the worst vote ever for the commonwealth choice.

Boycott or no boycott, this is a fact: around 6,800 people voted for the current status. That is last place.

Puerto Rico governor Ricardo Rosselló said that the people have spoken. Time for the Tennessee Plan.

The following speech from the governor in Spanish essentially says that the Rosselló administration will send representatives to Washington, D.C., and begin the statehood process.

The question is: will Washington even care?

This just in: @TheJusticeDept spokesperson has declined to comment on Sunday’s #Plebiscito2017 results.

Some U.S. politicians and political organizations have spoken out in favor of the result.

Puerto Rico should be admitted as a state to the United States. https://t.co/q5jahbqtCe

In addition, one of the country’s top Latino conservatives also supported the vote:

“Conservatives should welcome Puerto Rico’s vote for statehood,” Alfonso Aguilar said. “Puerto Rico is a bastion for conservative principles. Poll after poll shows that the immense majority of Puerto Ricans are pro-life, believe in traditional marriage and treasure religious freedom. They are also very supportive of school choice and our Armed Forces. Contrary to what many may think, they hate big government because they’ve lived through it and have seen it fail. Their vote for statehood is actually an expression of their desire to fully enjoy the prosperity provided by our system of free markets and limited government. They are not asking for more handouts –or a bailout- they are just asking for the same legal and political advantages that states have to jumpstart their economy through private initiative and entrepreneurship.”

LULAC supported the vote, too.

“LULAC will work with the government of Puerto Rico to ensure that the US Congress act on the will of the people of Puerto Rico as expressed in this plebiscite to end 118 years of territorial rule and admit Puerto Rico as the 51st State of the Union,” LULAC CEO Brent Wilkes said.

As well as Define American.

“Like so many of our undocumented brothers and sisters, Puerto Ricans —who are American citizens under law— are contributing to America without equitable representation. These citizens fight in our military under a commander-in-chief they cannot vote for, and —like undocumented Americans— contribute economically to a system they cannot fully benefit from,” Define American executive director Rev. Ryan Eller said. “The longstanding mistreatment of Puerto Rican Americans demonstrates that the legal concept of “citizenship” is fragile, and manipulated by those who would seek to deny it to others at their convenience. This is really a conversation about dignity, and in a country founded on the principles of liberty and justice, human dignity should be afforded to all people.”