Call Them What They Are, Mr. President: Radical White Supremacists 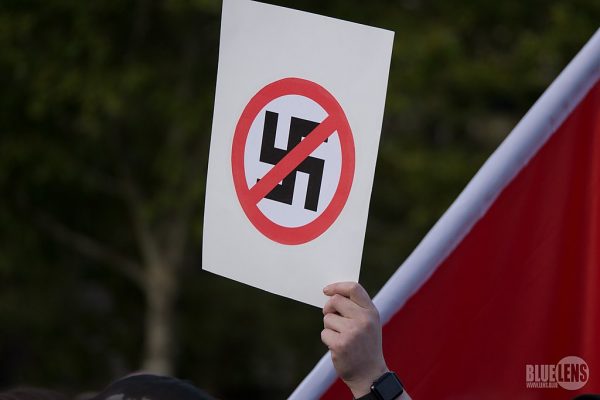 Pittsburghers gathered together in Schenley Plaza to mourn for the dead and injured while organizing against hate, bigotry, white supremacy, and so much more. (Photo by Mark Dixon/ Creative Commons Attribution 2.0 Generic license)

“Unite the Right” was a white nationalist, neo-Nazi rally held in Charlottesville, Virginia that protested the planned removal of a statue of Robert E. Lee. The event was organized by leaders of white nationalist movements—one of those leaders, Matthew Heimbach, was profiled by USA Today and showcased the event as a gathering for members of the far-right, white nationalist movement: “The biggest thing is a show of strength…to show that our organizations have been divided by class… religious issues… ideological grounds, can put 14 words —‘we must secure the existence of our people and the future of white children’— as our primary motivating factor.

The “show of strength” was successful in terms of attracting like-minded individuals. On Friday night, hundreds marched on the University of Virginia campus shouting epithets synonymous with Adolf Hitler’s National Socialist German Worker’s Party, commonly known as the Nazi Party.

Richard Spencer, the self-described leader of the alternative right (“alt-right”) defined the movement as supporters who advocated for a return “to an antiquated, pseudo-libertarian government that supports ‘traditional western civilization.” The groups parallel to neo-Nazism was evident when, at an event held in Washington, D.C., led by Spencer shortly after the election of Donald Trump, members saluted the then president-elect: “Hail Trump, hail our people, hail victory.”

Spencer was profiled target=”_blank” in The Atlantic in June, and stated a “long-term goal,” of establishing “a ‘post-American’ white ‘ethno-state,’ through a slow process of awakening ethnic pride and instituting government policies that reflect a new white race consciousness.” The events in Charlottesville echoed such beliefs, the shouts of “sieg heil” and “blood and soil” simply enforced it.

For Spencer, and many members of the alt-right and other far-right groups, Trump’s victory presented an opportunity to broadcast a message that was accepted, and even dispersed, on the campaign trail.

The message was overshadowed by events that occurred Saturday afternoon, when a car plowed into crowds of protesters and counter-protesters. James Alex Fields Jr., 20, of Ohio, was identified and charged with “one count of second-degree murder, three counts of malicious wounding and one count of hit-and-run attended failure to stop with injury,” according to the Washington Post.

The deaths associated with the rally, and the that preceded and followed, drew strong resentment and condemnation from government officials.

Governor Terry McAuliffe (D-Va.) declared a state of emergency, and issued a statement that coincided with the declaration that condemned “the mostly out-of-state protesters,” and the “hatred, bigotry and violence,” that occurred in Charlottesville. Members of Congress, Democrat and Republican, denounced the events that transpired in Charlottesville.

Senate Majority Leader Mitch McConnell (R-Ky.) tweeted: “The hate and bigotry witnessed in #Charlottesville does not reflect American values. I wholeheartedly oppose their actions.” House Minority Leader Nancy Pelosi (D-Calif.) tweeted: “Our nation is defined by the march of progress. Our strength lies in our diversity. We must reject hate. #Charlottesville.”

Perhaps, the most telling response was from President Donald Trump, who tweeted: “We ALL must be united & condemn all that hate stands for. There is no place for this kind of violence in America. Lets come together as one!” The response was tempered, and was worsened, when at a press conference Trump said: “We condemn in the strongest possible terms this egregious display of hatred, bigotry and violence on many sides, on many sides…It has been going on for a long time in our country-not Donald Trump, not Barack Obama. It has been going on for a very long time.”

Trump continued to advance false equivalencies, and refused to name white supremacists, the individuals who orchestrated the events that occurred on Friday and Saturday. A report from the Post, indicated that the indifference felt throughout the Trump administration. White House national security adviser, Sebastian Gorka, during an appearance for MSNBC, said: “There’s a great rule: all initial reports are false…You have to check them. You have to find out who the perpetrators are…We’ve had stories of crimes committed-alleged hate crimes-by right-wing individuals in the last six months that turned out actually to have been propagated by the left.”

The denial, and outright ambiguity, from the Trump administration towards the alt-right, neo-Nazi, and white supremacist movements has given the groups an added legitimacy that had not existed before the election. Trump’s silence has not been surprising, as Jelani Cobb of the New Yorker  wrote, “Trump spoke in platitudes; he was a man looking for gray areas where there were none…”

Because of this, members of the alt-right refuse to back down: “Our ideas are so powerful, that the cops have to break the law and use violence against us to shut us down…” Yet, even with such widespread media attention, the movement is considered a “fringe movement” by many.

Vann R. Newkirk II, of The Atlantic, questioned this, “when does a fringe movement stop being fringe?” The public’s perception only changes, if, and only if, it “transforms from a political peripheral into a regime.” For the past few months, with the policies advocated by the Trump administration, it appears so.

What took place in Charlottesville reflected the power the alt-right possesses, as it bathes in the apparent affection and disgusting ambiguity showcased by President Trump and his administration. Jamelle Bouie of Slate wrote that supporters of the alt-right “revealed the extent to which they can threaten and intimidate with a certain amount of impunity.”

The White House did address Trump’s “on many sides comments,” according to the New York Times: “The president said very strongly in his statement yesterday that he condemns all forms of violence, bigotry, and hatred…of course that includes white supremacists, KKK, neo-Nazi and all extremist groups. He called for national unity and bringing all Americans together.”

The White House updated Trump’s statement, not Trump, yet even that was not a harsh criticism. For this, the protesters were successful, as their message of hate was validated by the highest office. For that reason, the alt-right views Trump as an ally, and he has yet to prove such assumptions wrong.

Odds are, he never will.