On Latinidad and Vergüenza: Confessions of a Latinx Non-Spanish Speaker 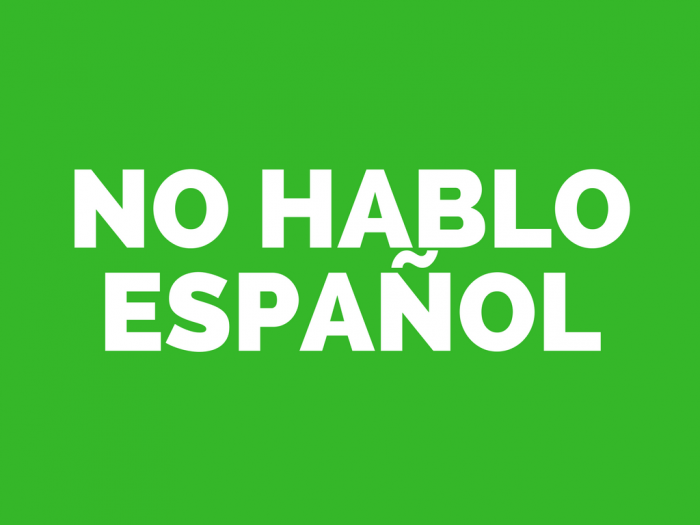 It happened again a few weeks ago. I was in a restaurant in Palermo, Buenos Aires, having brunch with a fellow Fulbright Scholar. We’re both in Argentina for eight months teaching English in the provinces. She ordered first with ease and a smile—the kind of ease mastering Spanish after a year abroad in Buenos Aires grants someone. My order wasn’t as seamless. I had practiced what to say to the server before she reached our table, but when she arrived, the script I had drafted in my head tangled as it left my mouth. My order was choppy. Nonsensical. Bad. Nonetheless, the server understood what I meant and made her way back inside, leaving us to sit with the mess my tongue had made.

“Oh my God, your Spanish!” my brunchmate said before laughing.

And then I felt it. The pressure in my head. The exasperated exhale. The tightening between my shoulders. The soft reddening of my face. The crawling sensation down my back. Each caused by feelings of being an imposter. A fraud. A “fake” Latino. A wanna-be Puerto Rican. A person whose “family is from Puerto Rico” but who “grew up speaking English.” The American with “Puerto Rican parents.” Feelings I’ve felt my whole life, especially when having my Spanish policed.

I put my head on the table and began scrolling through my Instagram feed. I didn’t want to talk about it, about “my” Spanish, because I very much know the way I sound when I pause for too long in between words, desperate for the rest of the sentence to hurry up and find me. And although I knew this situation, there was an undeniable unfamiliarity here. I mean, here I was, a Latinx person in Latin America having my Spanish critiqued by a Chinese-American woman from an upper-middle class, predominantly white family. I had never been confronted with these specific social dynamics before and they propelled me.

Both the familiar and unfamiliar aspects of this brief interaction have forced me to reflect on my position in Argentina and examine what being Puerto Rican in a Latin American country and not being able to Spanish fluently has taught me about Latinidad—both my own and in general.

In Argentina, the reaction to me not knowing Spanish varies much more than it does in the States. At times it is less severe, less accusatory, less invasive. Because my U.S. identify is always so visible here, it often hides many other parts of who I am (especially because there’s a reality T.V. host living in the White House). This inadvertently offers a sort of reprieve from the egregious crime that is to self-identify as Latinx while not being able to speak Spanish fluently. In comparison to the States, not as many people here initially question why I don’t speak Spanish because I am often read as a Yankee (an identity which always has English attached to it regardless of how many people in the States speak Spanish) or, because of my racial identity, as Brazilian (a racialized, non-white identity in Argentina that of course has Portuguese attached to it), and not immediately as a Spanish-speaking Latino or Latino at all. Whereas back home, my Latinx identity is never not visible, and consequently, neither is the fact that I don’t speak Spanish.

However, this is not always the case in Argentina. Often times the reaction to me not knowing Spanish is actually very similar to that in the States. I am not always perceived as an innocent, monolingual, English-speaking, estadounidense. Being non-white and (in my head, at least) very Puerto Rican-looking, I am often questioned about where my family is from or if I have “Latin in me.” If I speak to someone here long enough, the way I look will likely become a topic of discussion, forming a conversation I’ve had way too many times in my life.

In Argentina, it usually begins with me claiming my Puerto Rican identity, which is why I might not look like a regular Yankee (see: WASP). The confused will then ask a question that confirms a well-known fact about a little island in the Caribbean, “But they speak Spanish in Puerto Rico, right?” To which I will confirm, “Yes.” They will then ask if my parents speak Spanish. “Yes.” And this “yes” is the yes of all yeses because it always leads us down the most enervating of enervating paths towards the most simple of simple observations: in a country where erasure and cultural imperialism is as common as fast food, how could I possibly not learn my “family’s” language? What inherent flaw(s) do I possess that make me incapable of acquiring a language that wasn’t spoken to me enough? How could my parents, who were also born and raised in Chicago, have failed me so miserably?

And, underneath all of those invasive questions (that aren’t actually questions but a load of accusations and assumptions about someone they barely know) is this confusion about why I couldn’t muster up enough capital or privilege or time or interest to learn Spanish like the heaps of non-Latinx Yankees do every other day? I mean, it is my family’s language, right? I mean, I am claiming to be Puerto Rican, ain’t I? Why didn’t I at least try to learn the language from a stranger who would give me a version of Spanish that wouldn’t be my father’s nor my mother’s nor my grandmothers’? How could I be so shameless?

I know these questions and I know the underlying, thinly-veiled, judgment that comes along with them. I’ve heard them my entire life. The experience of being a non-Spanish speaking Latino in Córdoba, Argentina, and in Chicago, Illinois, overlap much more than they don’t. What these two experiences share, over 5,000 miles apart, is that same, inseparable, stinging vergüenza.

Confessing that I do not speak Spanish has always felt embarrassing and shameful. And wrapped in that shame are always these feeling that my Latinidad is off-brand, inauthentic, inferior, decorative, even—a t-shirt I can wear willingly whenever I want to feel connectedness (Latin American) or unique (USA) and then take off (just as willingly) whenever I no longer want to be otherized, politicized, oppressed, un-represented, invisible.

The perpetuation of the idea that Latinxs who don’t speak Spanish fluently are less Latinx because we speak a different colonizer’s language carries with it an incredibly exhausting burden of insecurity and isolation. It relegates us to an identity that is simple, stifling, and incomplete. An identity that oscillates somewhere between American and Latinx, but never quite fully reaching either side.

Claiming that I am less Puerto Rican because I can’t memorize every word in “Despacito” or because my Spanish accent is too “American” or because I have to Google past tense Spanish suffixes, is an act of erasure. It erases the violent and racist history of the United States’ occupation of Puerto Rico. It erases the forced migration of Puerto Ricans to the mainland in search of “opportunity” only to be met with the very same conditions they were fleeing: state violence, inadequate health care, poor housing, exploitative wages, drugs, and disappointment.

It erases a white supremacist society’s culpability in the loss of our culture, our language, our history, and ascribes responsibility to individuals trying to survive its oppressive grip on our lives.

It erases the mornings I woke up to my mom cleaning the house with La India playing on the stereo, singing every lyric to “Mi Mayor Venganza” with more passion than your faves ever could.

It erases the years I screamed “¡Boricua!” from a sunroof on Division Street every third Saturday in June.

It erases the two-bedroom apartment on Armitage and Kedzie where we lived, all six of us, long before Humboldt Park became a white, hipster playground.

It erases the loss my grandma felt getting off that plane in Chicago, now beneath a different moon, a universe away from her country, unsure of everything except a small, burgeoning fact in the corner of her mind, telling her that one day her grandkids might never be able to ask her what she missed the most about The Island and why.

It erases the fact that I shouldn’t have to list any of this to prove my Latinidad, yet I am almost always having to prove myself—to those within my community and, even worse, to those who are not.

Far too often has a non-Latinx person, who has zero stake in our culture, our politics, our collective struggle, felt emboldened enough to police my “broken” Spanish. In public. With witnesses. The language my parents said “I love you” in. The language my dad sang his favorite Héctor Lavoe songs in.

The language my grandma said her goodbyes in at his funeral. People who grew up in neighborhoods that welcomed the trendy “Latin” restaurant, but criminalized the elotero. They’ve gathered enough audacity to police my navigation of a culture that was passed down to me by my family, during an era where efforts to erase us were tenfold, and not by a $20 an hour Spanish tutor. And because of this, it is time Latinxs, both Spanish speaking and non, to let go of the rigid expectations of what it means to be a “real (insert Latinx ethnicity)” that can give way for this toxic policing.

So with that in mind, I leave you with this:

Guidelines For Dealing With a Non-Fluent Latinx Person

Justin Agrelo is a writer living in Córdoba, Argentina. He is a graduate of DePauw University and originally from Chicago. He tweets from @jagrlo.