Honduras Will Emerge a Free and Dignified People 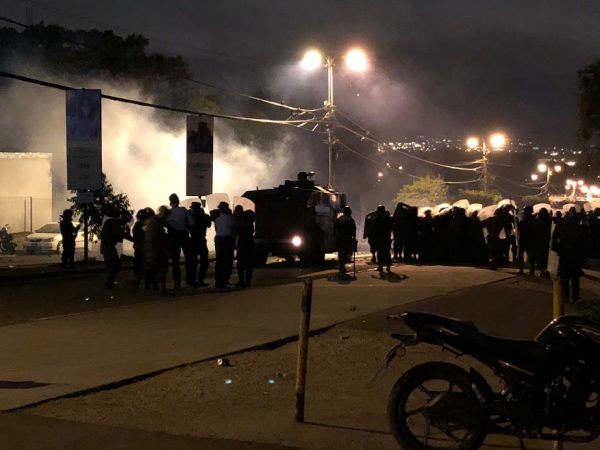 The Honduran right-wing was the only group that didn’t learn from the events of 2009 in Honduras when they orchestrated the first coup d’état of the 21st century in Latin America. In 2009, they considered themselves defenders of “democracy” and benefited from the emerging dignity of the Honduran Liberal Party, and were backed by the Armed Forces. But today, these right-wingers are the same people who want to perpetrate another coup. This time, however, they are in conspiracy with the other political party in Honduras, and the worst political institution of them all, the National Party.

Today, at this important crossroads in Honduras, the Honduran oligarchy thought they could do exactly same thing as they did eight years ago. But they forgot, because of the 2009 coup d’état and the events since, the level of critical consciousness and the process of political emancipation of the Honduran population has transcended to other stages, beyond just political parties, beyond just the people, and beyond just the simple exercise of electoral participation by voting. People participate for our country, for respect for our rule of law, and for our democracy.

The situation we find ourselves in now is the result of a systematic process of critical and active learning, where Hondurans also must “read” and learn from their exhausting reality. The Honduran people saw the kidnapping of democracy first-hand, and were already convinced —even before the robbery of the ballot boxes— that taking it to the streets was the only answer.

We, as Honduran people, have lost our faith in institutions, in sweet-talking and populist leaders, and in international organizations. We, the Honduran people, know that we can only count on ourselves, and that while we democratize our country, our participation means much more than the single act of voting.

Our taking over of the streets in Honduras is not a response to any strategy of the opposition to Juan Orlando Hernández. On the contrary, I think that the opposition themselves is surprised at the Honduran people’s actions. However, it is always the people, stemming from their local organizations and places, who know with an absolute conviction that when their democracy is stolen, they must show up to recover it.

From this point on, any Honduran leader with political aspirations who wants to attribute their own achievements to this process of social resistance must understand, without any doubt, that the Honduran people will no longer be meek sheep led to slaughterhouse. This is a clear and definite non-negotiable.

If the TSE (the Honduran voting authority) declares in favor of Juan Orlando Hernández, they feed a fire that started from a spark that was already struck. What we have now is unstoppable. Now we have the Honduran people, with clear convictions and who wish to generate their own conditions, saying: enough is enough.

Beware of What Is Happening Behind Closed Curtains

Even before the triumph of the Honduran people by taking over the streets and before the peaceful and dignified resistance began, the Honduran right-wing realized they had to change their strategy. This fraud and their assault on democracy was out of hand. My friend —Allan from El Salvador— is a social psychologist, and I’ll paraphrase what he said: People like us, who have historically been watered with our own blood, deserve much more than the scraps and crumbs of apparent “good will.” I agree with this, because history has taught me to doubt the miracles that do not stem from the people themselves, and those that are produced by fear. Without a doubt, the historical rotting stench of all the corpses that have been murdered by the right-wing in Honduran history cannot be erased with a sudden and small sprinkle of repentance for recognition of the sovereignty of the people. For me, what has recently happened with the military is too much of a coincidence —the revolt of the armed forces, the national police, and the special command charges… the delivery of a pronouncement from the U.S. Embassy without having an ambassador in place for many months…  the mutiny that happened in a prison in the northern city of El Progreso which resulted in tragic deaths. This is a moment where Hondurans must do two things simultaneously. On one hand, we must attend to the claims of the criminal lawsuits against those who violated human rights in the military and police forces. On the other, we must not lose sight of our objective of counting votes and respect for what we as Honduran people decided at the polls.

I am suspicious that what is at work here is the old “interventionist gringo policy” and it is beginning to play out in Honduras once again. Who provides the most financing for the Honduran military, always under the pretext of fighting organized crime and drug trafficking? Who sells the weapons to be used in the anti-narcotics fight? Who trains the Honduran military forces? The answer to these questions, precisely, is the government of the United States.

Even before the international eyes were turned to Honduras, without a doubt, the Honduran situation was affecting the government of the United States, and was no longer suiting their needs. Honduras is where the U.S. has concentrated their regional hegemonic power. Honduras is one of the few countries that supports the U.S. in this matter—Honduras has seven U.S. military bases, including Palmerola (also known as Soto Cano Air Base). We are the only ones in the region who must be the experiment for coup d’états (such as in 2009) and economic policies (Alliance for Prosperity, 2014).

What I would like to say, is that the military and police setting down their arms could be a tactical change that does not actually separate them at all from their initial strategy. The initial strategy is a gringo policy that has lost some strength in the region and seeks recover it in Latin America. On a Honduras-specific note, this may be the move that Juan Orlando Hernández has always expected to take to promote his installation of the Military Police of the Public Order, whose commanders are those who ran the historic Battalion 3-16 in the 1980s, which orchestrated an alliance with the national security but against any insurgents of the United States. The Battalion 3-16 caused the largest number of missing persons in Honduran history. This theory can be put in evidence when we look at the National Party infiltrators of the demonstrations who provoke looting—when there are no police to address this (because they have already set down their arms), Juan Orlando’s personal troops will emerge as the saviors of Honduran national security.

Do Not Demobilize Our Only Way Out

It should not possible that after so many coup d’états, deaths, and violent repression, that today we are naively enthralled with the military and police as if we are following the music of Hamlet’s flutist. We MUST return to the cause, we MUST commit to the cause, and we MUST use the strength of the rivers and of our ancestral guardians to reconstruct Honduran history once and for all.

Héctor Efrén Flores is a lawyer who works for an educational foundation in Honduras. He is also a regionally published poet and essayist in the resistance against oppression. You can follow him @hefrenf.