EDITOR’S NOTE: On Wednesday, Latino Rebels received the following media release from the National Hispanic Media Coalition. We agree with it 100%. 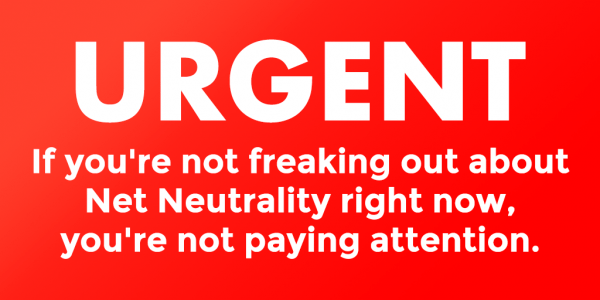 Tomorrow, the Federal Communications Commission (FCC) is set to repeal Net Neutrality  consumer protections which have helped Latinos and people of color find economic and educational opportunities online, and provided a platform to organize for change without interference or censorship from Internet Service Providers (ISPs). The FCC’s decision allows corporations like Comcast, Verizon, and AT&T to exploit communities that have little to no choice in how they get their Internet service. The FCC’s repeal of these vital consumer protections gives ISPs the green light to slow down or block content and services from websites, effectively silencing voices of color across the Internet. The National Hispanic Media Coalition (NHMC) is prepared to seek judicial review of the FCC’s Net Neutrality repeal to ensure that Latinos and other marginalized communities continue to have access to an open Internet.

“Chairman Pai’s repeal of Net Neutrality rules is a frontal attack on Latinos and other communities of color, who already face substantial barriers in getting online, staying online, and having high quality Internet. With its repeal of Net Neutrality, the FCC will effectively erect additional barriers which will impact our ability to speak and be heard online. By handing over control of the Internet to powerful corporations, this Trump FCC will stymie our voices and our opportunities.

“We also have uncovered evidence that the Net Neutrality consumer protections set in place by the FCC in 2015 allowed consumers to reach out to the agency which helped facilitate responses and resolutions. Now the FCC is set to remove those protections without even taking a look at the over 50,000 Net Neutrality complaints filed by consumers over the last two years. This is a fatal error in the process, and the FCC’s lack of acknowledgement or analysis of these complaints leaves a gaping hole in the record. NHMC will challenge the FCC’s repeal in court and continue to fight for Latinos and people of color for whom access to an open Internet is a basic human right.”

Back in May 2017, NHMC sent a series of Freedom of Information Act (FOIA) requests to the FCC and ultimately uncovered over 50,000 Net Neutrality consumer complaints excluded from FCC’s analysis in its repeal of the rules.

While the FCC continues to withhold many of the documents requested by NHMC in its FOIA requests, NHMC commissioned an independent expert report of the Net Neutrality consumer complaints. The report found that both consumers and their service providers appear to consider broadband access as a basic stand-alone telecommunications service. To read the full report, click here.